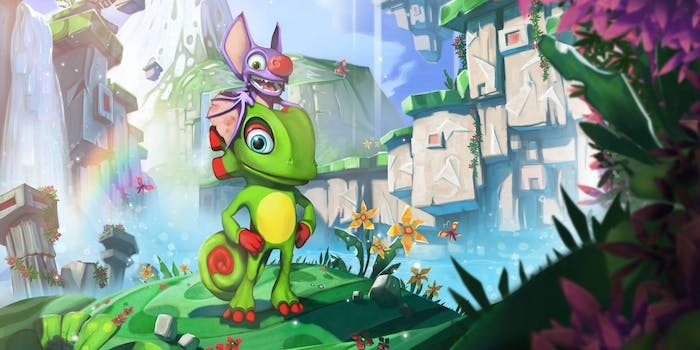 The spiritual successor to Banjo-Kazooie is being crowdfunded on Kickstarter

The classic Banjo-Kazooie you remember from the Nintendo 64 days is back—sort of.

The team over at Playtonic Games, made up of former developers from Rare, have just launched a Kickstarter for its new game, Yooka-Laylee.

The parallels between Yooka-Laylee and Banjo-Kazooie are quite blatant, intentionally so. Both are dual-character driven 3D platformers, both have hyphenated names based on instruments, both have a vibrant and colorful art style, and both were created by Steve Mayles.

Character driven puzzle-platfomers were all the rage during the PS2, Xbox, and Gamecube generation. The genre fell out of favor with gamers as many grew older and wanted more mature experiences. What was interesting was that younger gamers during the PS3, Xbox 360, and Wii generation demanded shooters over Mario-style games as well.

With the current climate of retail games being major budget romps, it would be difficult for Playtonic to pitch Yooka-Laylee to a major publisher. Making it downloadable with a $15 price tag is the most effective way of going about it. It will attract gamers who are craving the nostalgia of running around in a colorful landscape. And it will pique curiosities of younger gamers who never had the chance to experience quality character platformers with a Pixar-like sensibility.

The Kickstarter has a very modest goal of $270,000, which it has already surpassed, to get a PC release date. If it reaches $1 million, which it likely will, it will get a simultaneous Wii U, Xbox One, and PS4 launch. There are other goodies as well, like T-shirts and N64 style cartridge boxes.

If everything goes according to plan, the team expects the game to come out in October 2016.