Fans of Xenoblade will enjoy this immersive sequel.

The first thing Xenoblade Chronicles X achieves is what should be expected of all good sequels: Fans of the previous installment will feel right at home. It’s simply rich in familiarity, from the controls to the user interface to the presentation and flow.

Same goes for the incredibly chatty party members during combat. They diligently shout the names of whatever skill they about to use. If you marathoned the original Xenoblade to prepare for X, these recognizable features will make for a smooth transition into this sequel.

As with most JRPGs, a key component to X is the time spent exploring its vast open world. It encourages players to explore the same way they did in Xenoblade, and rewarding them with a wealth of incentives like experience, scattered treasures, and collectables. Obsessively investigating every accessible corner of the maps never feels like a waste of time, thanks in part to the scenic backgrounds and vistas. Like many recent open-world games, if you can see a point in the horizon, you can walk to it. In a land with no unreachable set pieces in the background, it’s easy to appreciate the thought that went into this imaginative world. The one notable downside is that the Wii U’s technical limitations holds X back with less than silky frame rates, mediocre draw distance, and frequent instances of pop-in with objects and textures. 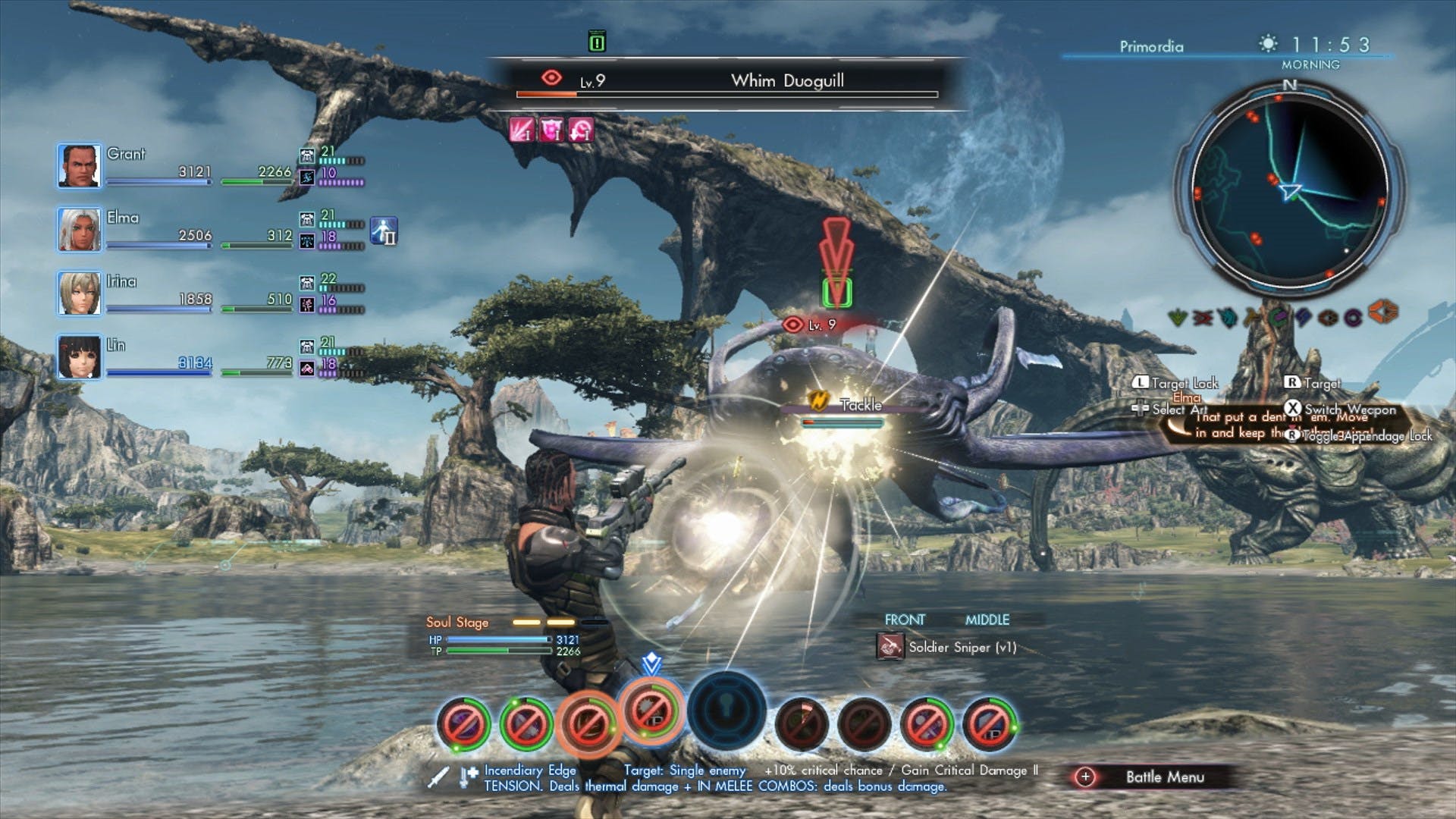 To further emphasize the open-world design of X, there is very little terrain that is put behind progression gates, aside from a number of high-level enemies. It is up to the player’s sense of adventure and exploration to discover unmarked areas of the map. You play a kind of settler or frontiersman on a foreign planet as you install probes to discover new life and relay information. This gives a much greater feel of freedom and accomplishment. The boldest souls can even take a chance to sneak past some high-level enemies in far off areas in the hopes of coming back with some valuable items or gear.

Taking some inspiration from MMORPGs, progression through the story is gated based on the number and kind of quests the player completes; optional content isn’t technically optional. This is hardly an issue in a game that is drenched in the aforementioned incentives. Taking on the side content makes many of the key story points all the more easy to progress through. In other words, expect a difficulty spike if you just want to mainline the story all the way to the end. 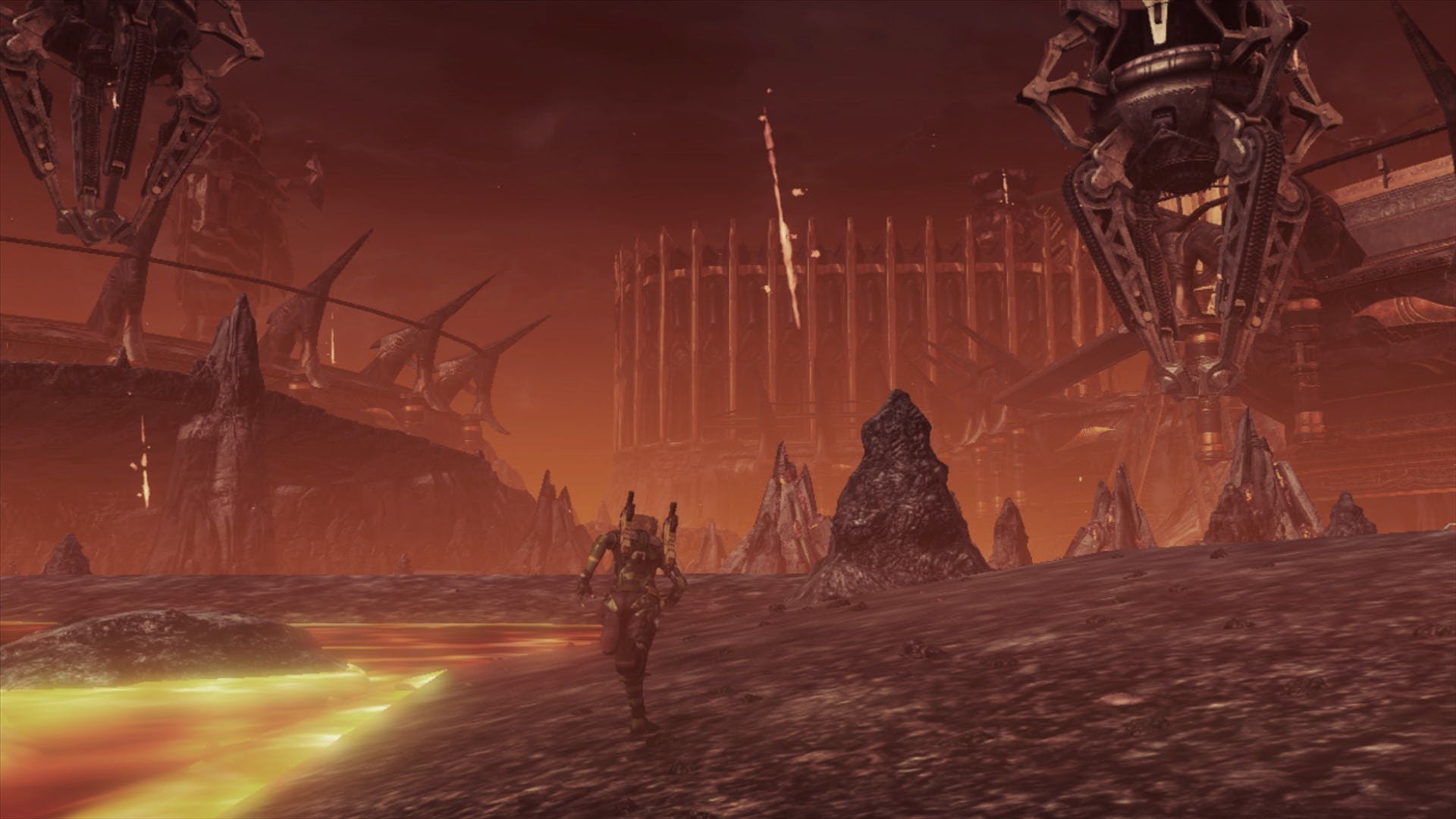 Anyone who has followed director Tetsuya Takahashi and his various “Xeno” works can be assured that X’s battle system is wholly engrossing, with a handful of improvements over the last game. Along with a new four-player party, players will also notice is there is no longer a dedicated healer class. Healing is now up to the entire group through the use of “Soul Voice,” the timing gimmick from Xenoblade where you must press B as a circle closes in on itself on screen. If you hit the timing perfectly, your characters can be healed slightly and receive a status boost.  This design change opens up a good amount of freedom for the player, allowing them to assemble a party of their choice without feeling restricted by the need for a dedicated healer.

Complementary to the battles are the giant mechs called “Skells.” It takes a page from the classic Xenogears playbook by temporarily increasing the player’s fighting capacities dramatically. Moreover, the Skells’ ability to morph into vehicles adds depth and convenience to traversing X’s vast open world. Much like specific Chocobos in Final Fantasy VII, the ability to pilot a Skell allows you to reach previously inaccessible parts of the world. There’s further depth to be found in fuel management. It’s a stimulating test to be constantly mindful of fuel, given its limited supply, but it is certainly manageable with enough planning and foresight. In all, it’s easy to appreciate the sense of empowerment that comes from piloting a Skell.

Easily the most significant addition to X is its version of asynchronous multiplayer. Players are loosely tied to others to form a squad of up to 32 characters, during which they can party up and exchange information with other players. The key here is that you don’t actually party up with real players, but rather copies of their characters for a limited time. You will see other players’ characters in a variety of areas throughout the game, readily available if you are lacking in firepower. There is also true co-op multiplayer in the form of Squad Missions, where four players can team up to carry out a mission in real time. One issue is that triggering these missions is a convoluted process, requiring players to run around killing a select amount of one enemy type. Once that enemy type has been eliminated, a player can go to the Squad Mission terminal and activate an actual mission and recruit real players.  If all of the Squad Missions are complete, players can band together to fight a world boss. Despite the time-consuming hurdle to engage in these quests, they make for a welcome recurring diversion from the main storyline. 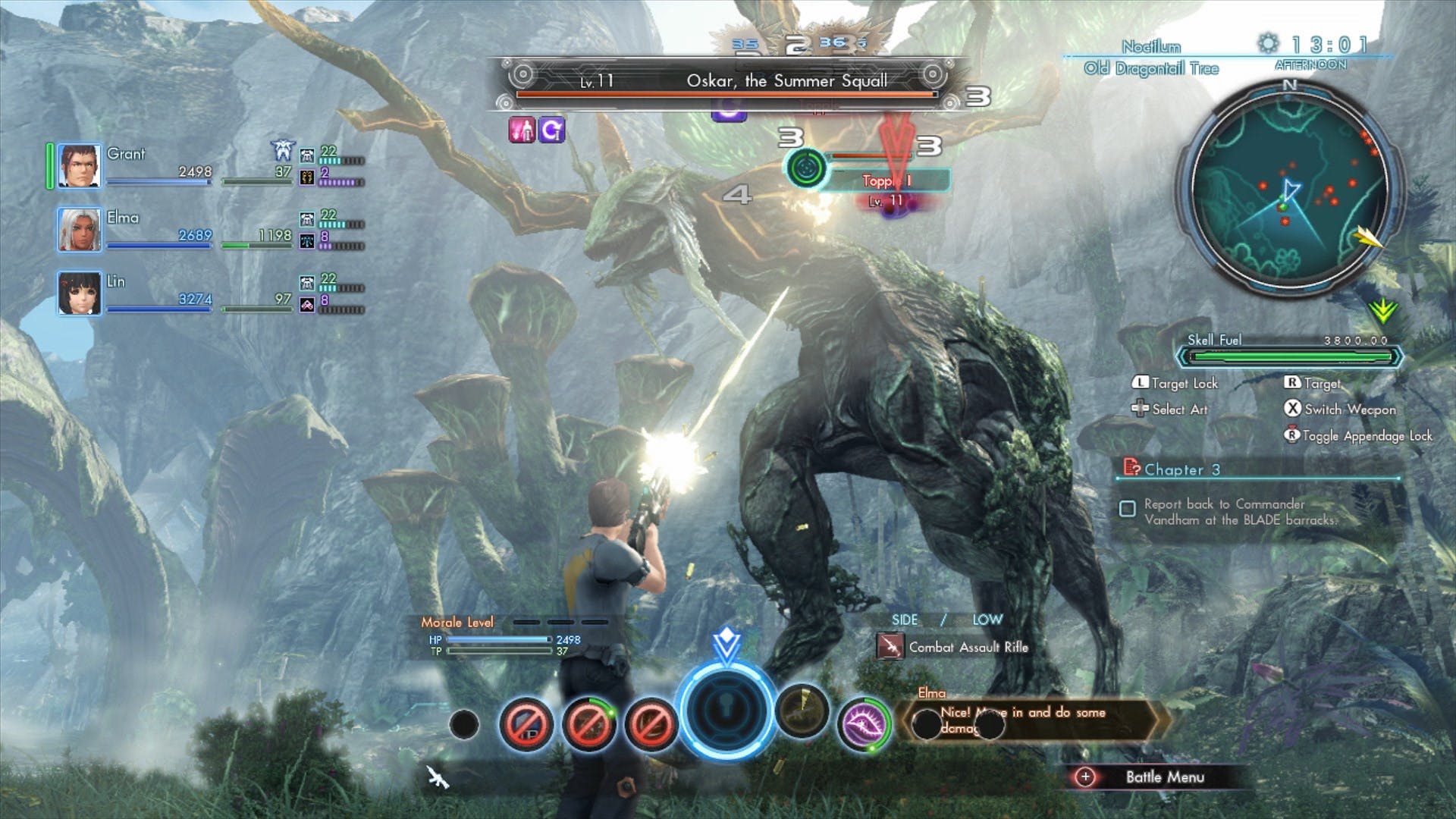 The ability to create a custom character isn’t as common in JRPGs as compared to western RPGs, but you certainly can create your own protagonist in X. This obviously adds a sense of player connection despite the character design limitations. You’re limited to pre-built faces and hairstyles are limited to your chosen face type. For instance, if you choose the face of a young boy, you are limited to mop-top style “hair in the eyes” types or something more akin to a character in Dragon Ball Z. Other options are well done with a variety of colors and styles, right down to robotic eye types and character voices.

The use of your protagonist’s voice is in itself an oddity. While he won’t hold back at shouting every executed skill, he remains a silent hero through much of the key story events. Other characters will recognize that your protagonist doesn’t speak much (your dialogue usually boils down to an unvoiced yes or no response), resulting to your character receiving the sarcastic “Chatty Cathy” nickname. While these vocal inconsistencies break the immersion, it isn’t a big deal in the overall experience. Most of the voice acting in the game is well done, with appropriate tone and candor throughout.

That said, the audio suffers from terrible mixing, and the soundtrack compositions are all over the quality spectrum. Some music tracks sound inappropriate for many on-screen situations. It’s not only distracting, it also often plays right over dialogue. It’s not unusual for your team to come back to the barracks to report on a mission and have a pop ballad with lyrics play at the same audio level as the spoken dialogue. This is a nightmare for those who play with subtitles off.  These problems could be easily corrected with an audio slider in the game’s menu. Sadly, there isn’t one in X.

Xenoblade Chronicles X excels when it emulates and improves upon the best parts of Xenoblade. X shines when it comes to combat, exploration, and vehicle systems, making this sequel more engrossing than its predecessor. Its richness makes it easier to overlook the shortcomings from both the technical limitations of the Wii U and the inconsistent soundtrack. Even without the multiplayer, there is plenty to do and see in X, but with that as an added component, the game should make a lot of Wii U owners happy well into 2017.

Disclosure: Our review copy of Xenoblade Chronicles X for Wii U was provided courtesy of Nintendo.