The human body can be pretty amazing.

Nestled in the back of your head, just behind where your spinal cord attaches to your brain lies a very important region: the cerebellum. Its grooved surface looks strikingly different from the folds of your cerebral cortex. It’s responsible for coordinating movements by combining inputs from your senses via the spinal cord with information from other brain regions.

So when a 24-year old woman walked into a hospital and complained about dizziness and nausea, the doctors were shocked to discover that she was missing a cerebellum.

Neurosurgeon Feng Yu and his colleagues at the Chinese PLA General Hospital of Jinan Military Area Command in Shandong Province reported the woman’s remarkable condition in the journal Brain in late August. “Only eight living cases have been reported prior to this study,” the researchers write. 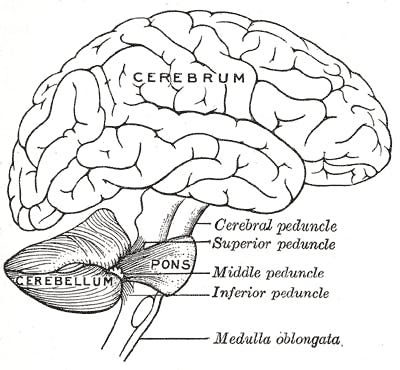 Missing a cerebellum comes with some complications, as one might expect for such a critical brain region. (The regions represents about “10 percent of the brain’s total volume, but contains 50 percent of its neurons,” writes Helen Thompson for The New Scientist.) The woman’s mother reported that her daughter wasn’t able to walk until she was 7 years old, never ran or jumped, and couldn’t speak intelligibly until she was 6. Even today, she has trouble walking steadily. She also has slightly slurred pronunciation related to difficulties with the muscles involved in speech.

Yet, the woman is married and has a daughter of her own. Not surprisingly, people are fascinated by this story: the New Scientist article is so popular it already crashed the site:

Plenty of people are chiming in on Twitter with clever quips and expressions of amazement:

Everything I know is a lie: https://t.co/S1HPqIQBND

Was it Sarah Palin? “@washingtonpost: An adult woman was found to be missing her cerebellum https://t.co/cQGtBdexSr pic.twitter.com/WrNVGmNsXI”

Her case is an illustration of one of the brain’s most fascinating characteristics—the ability to change and compensate for missing parts. An article on io9.com explains this concept of neuroplasticity:

If you lose a finger, for example, the neural representations of the neighboring fingers get bigger. Sever someone’s optic nerve, and the neurons devoted to vision will be co-opted by neurons associated with other cognitive functions. This is one reason blind people tend to have excellent audio acuity.

The researchers note that the woman can help them understand how the cerebellum functions and what parts of the brain take over when it is damaged. Because the cerebellum continues to grow and change after birth, it is vulnerable to disorders that affect brain development. At the very least, her story is an example of the incredible adaptability of life.