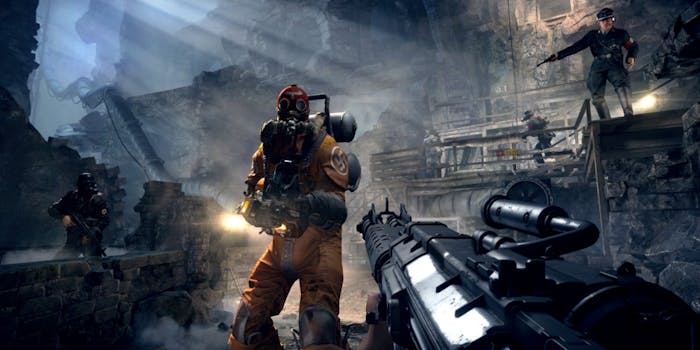 The Old Blood is a prequel to The New Order, constructed as a standalone game. Structurally it’s a callback to 2007’s Return to Castle Wolfenstein, from infiltrating the titular castle that serves as the headquarters for the SS Paranormal Division, to making your escape and fighting the undead let loose from a Nazi archaeological dig.

This time the story takes place within the alternate universe established by The New Order, where the Nazis have all but won World War II thanks to the technologies invented by General Deathshead (who also, originally hails from Return to Castle Wolfenstein).

Series hero B.J. Blazkowicz isn’t visiting Castle Wolfenstein in The Old Blood to inquire about what the SS Paranormal Division is up to, however. He gets caught up in their shenanigans while trying to steal a folder that contains the location of Deathshead’s research compound, the assault on which serves as the opening scene for The New Order.

Nazi soldiers in The Old Blood intelligently use cover, liberally use grenades to keep the player moving, and aggressively flank positions. MachineGames for a second time highlights the fluidity missing from most other first-person shooters nowadays, through a second round of Wolfenstein level designs that stress multiple approaches and varied tactics.

Every time I attempted stealth, The Old Blood made me realize how dependent I’ve become on radar displays, rather than taking my time to scan an area and locate the enemy the old-fashioned way. If you like the mentality of old-school shooters, complete with health and armor pickups, then The Old Blood is precisely your speed. 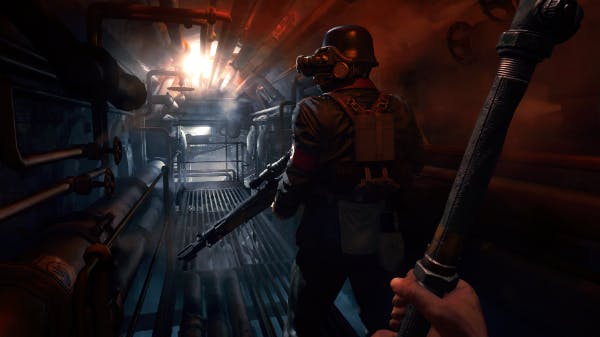 The weapons for the most part are retro versions of their future selves in The New Order, and once again most everything is dual-wieldable. Gone is the laser gun from The New Order, but Blazkowicz has a one-round grenade launcher pistol that’s fun to shoot into a group of Nazis and watch them vaporize in gouts of red. Blazkowicz also manages to hold onto a water pipe for the entire adventure, putting it to brutal use in stealth takedowns when he isn’t using it as a climbing piton, or to pry open doors and hatches.

While the tactics, maps, and combat pacing are consistent between The Old Blood and The New Order, the tone of The Old Blood is a decided change from the uncomfortable discussion of the ideological evil underpinning Nazi thought that dominated The New Order’s narrative.

The New Order gave us human experimentation, villains discussing racial purity, and the nightmare of a continuing genocide in Africa. The Old Blood gives us a cartoon villain who feeds prisoners to his dogs, and a fleeting glimpse of a Nazi archaeologist pondering her fascination with old maps and dead German kings. As a callback to Return to Castle Wolfenstein, which like the preponderance of World War II-themed games treated Nazis as nothing more than guilt-free targets for slaughter, it’s appropriate that The Old Blood doesn’t delve into serious topics.

The consequence of this decision for me is that The Old Blood feels incompatible with The New Order. Even if The Old Blood were constructed as a standalone product, it still trumpets its identity as a prequel. And when Blazkowicz gets scooped up by friends at the end of The Old Blood, the game only waves a hand at the fact that the Allies just cleaned up a German village filled with shambling undead.

One would think walking corpses and occult monsters would make an impression even upon battle-hardened soldiers, and in that moment The Old Blood, a game filled with armored super soldiers, cybernetic dogs, and evil spirits, finally felt silly to me.

Considering all the horror pulp film references in the advertising for The Old Blood, and the campy humor in the writing, it’s clear The Old Blood doesn’t expect anyone to take it seriously. It’s a return to good old-fashioned Nazi slaughter, with little else to distract the player. I missed the somber tone of The New Order, which tried to do something different with a World War II shooter. The Old Blood stuck to the tired, tried and true, and I hope it doesn’t presage MachineGames shying away from discussion of serious topics in the inevitable follow-up to The New Order.

Disclosure: Our Xbox One review copy of Wolfenstein: The Old Blood was provided by Bethesda Softworks.