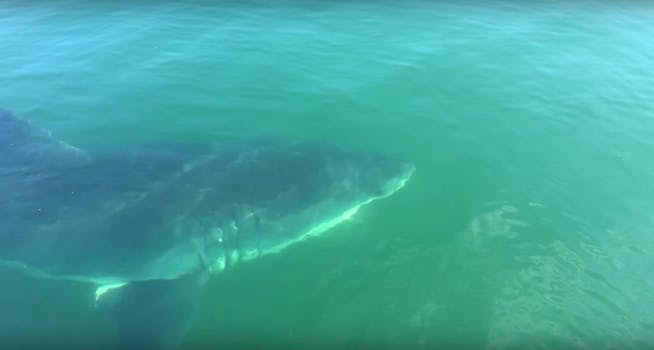 'Should we email Sharktivity?' Yes.

In a five-minute video posted by YouTube user James Gibbons, a white shark appears near a boat, circles it briefly, and then leaves.

The description of the video merely says “Race Point,” the name of a beach near Provincetown in Cape Cod, Massachusetts. According to Sharktivity, an app the boy mentions several times in the video, several white sharks are making their way up the coast of Cape Cod this summer.

“Should we email Sharktivity?” The boy asks. Apparently they did. On Sharktivity’s online map, you can click on one of the logs near Provincetown to see a short description of the sighting and a link to the video on YouTube.

The shark was in pretty shallow water—about 12 feet—according to the man in the video. He also stated that the shark was probably sizing them up for dinner. That seems unlikely. According to the Boston Globe, sharks around Cape Cod usually stick to hunting seals in the Monomoy National Wildlife Refuge off Chatham, about 35 miles south of Race Point.

It’s not clear what the shark was doing up that far north. The Daily Dot has reached out to the Atlantic White Shark Conservancy for comment, and will update if we hear back.

She said it is not uncommon to see white sharks in shallow waters, and that they have been spotted off the coast of Provincetown in years past.

“There are seals present all up and down the coast and we know [white sharks] are in the area hunting seals, and we certainly have seen them swimming in areas where there are seals around,” Wigren said. “The seals are moving close to shore, back and forth, across the coast so it seems that the sharks are following that.”

She added that three other people saw the same shark on the same day. One took a video and another took a picture of it, Wigren said, allowing marine fisheries biologist John Chisholm to identify it as the same 15-foot individual.

“Anyone who’s spent time working with white sharks would say that they are a curious species,” Wigren said, suggesting it’s possible the shark came up to the boat merely to check it out. “So there’s no reason [for] those people to feel they were in any kind of danger.”

The boy who can be heard in the video is apparently quite the shark enthusiast, too, so Wigren said she was happy that he was lucky enough to have such a positive experience.