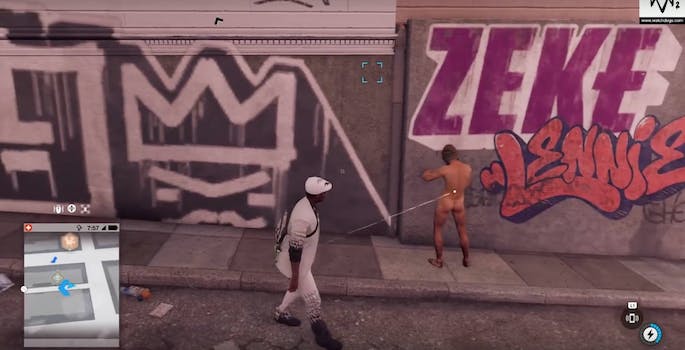 These graphics are really... graphic.

Ubisoft probably didn’t get the reception it was expecting from its launch of Watch Dogs 2 today. Instead of talking about game mechanics, players were abuzz over the explicit detail of some non-player characters’ genitals.

Like its predecessor, Watch Dogs 2 is adult-rated and does contain nudity, but this time the graphics were particularly… graphic. A player on the gaming forum NeoGaf captured a photo of a female character laying on the sidewalk with her legs splayed open after he said he accidentally killed her with a gas pipe. For some reason the woman’s genitals are on display and exceedinly accurate (NSFW).

The player told Kotaku that when he uploaded the photo to PlayStation Network he was temporarily banned for sharing explicit material.

Other players have posted similarly graphic photos and video, including an anatomically correct male character taking a wiz and strutting down the street in the buff.

Ubisoft has responded to the controversy, saying it would remove “particularly explicit” graphics from the game, so players can freely share screengrabs without the risk of violating networks’ terms of service.

“We’re aware that one of the NPC models in Watch Dogs 2 is rendered in a way that is particularly explicit,” Ubisoft said in a statement published by Polygon. “While Watch Dogs 2 is a mature-rated game, we apologize and will update this NPC model to make it more consistent with other NPC models in the game in a patch to be released this week. We also are working with our first-party partners to ensure that players can continue to play and share all content from the game within the bounds of the first parties’ respective codes of conduct.”

Ubisoft’s statement seems to zero in on the female character in question. It’s not clear if the developer will scrub other instances of detailed genitals in the game as well.