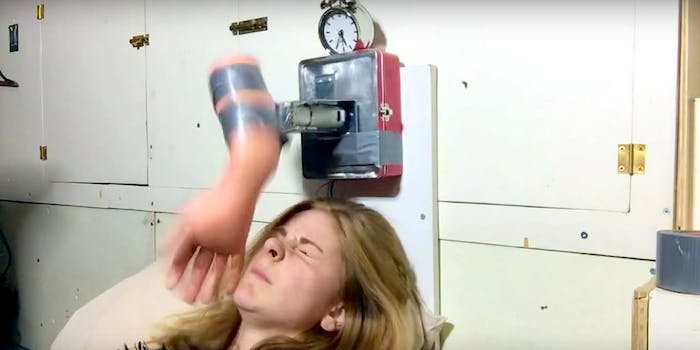 But it didn’t quite turn out as she’d hoped.

Redditor, YouTuber, and self-professed “expert in shitty robots” Simone Giertz built herself a new alarm clock this month. But she connected the typical ringing clock to a rotating motor, to which she taped a rubber hand. I think you know where this is going.

She built this slapping machine to get out of bed by greeting each morning with several blows in the face. But everything didn’t quite go as well as it could have.

The so-called “wake-up machine” added a little insult to injury by catching Giertz’s hair in its motor. Thankfully, she was able to extract it without appearing to suffer too much bodily harm. Here it is again in glorious GIF form.

I no longer have a hard time getting up in the morning.

You may also recognize Giertz’s other robot, the “breakfast machine,” popular on Reddit only a few days ago.

Maybe next she’ll up the ante with a cooking robot a la Wallace and Gromit.