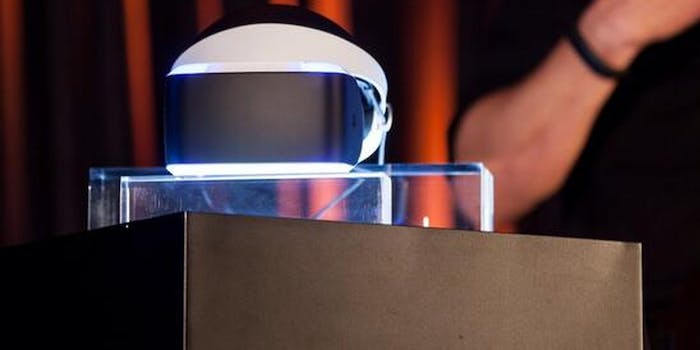 Does virtual reality still work for the vision impaired?

When it comes to virtual reality headsets, there’s Sony’s Project Morpheus and Facebook’s Oculus Rift. They’re said to offer an immersive virtual experience, but I was skeptical. These headsets are meant for people who have decent vision, and alas, I can only see out of one eye.

I met with Jeff Stafford from PlayStation’s Research and Development team during an E3 after-party last week. I told him that I got to try out Oculus Rift earlier that day, but still hadn’t given Morpheus a try. For me, the Oculus works decently enough, but the lag and lack of resolution really did make things disorienting.

I let Jeff know about my disability, and he assured me that Project Morpheus solves for parallax better than their competitors. Parallax is when a single object is viewed from two different angles to help measure distance and depth. For pretty much everyone, having two eyes solves for parallax. For me, my brain takes a second longer to process distance and depth. If someone throws me a ball, I have to shift my head to capture another angle. If not, I will embarrassingly miss, grabbing at the air too early.

The following day I dropped by the Sony booth to give it a try. Once there, I took off my glasses and lowered Sony’s futuristic-looking prototype onto my head.

I found myself in a generic medieval-like setting, complete with a sword and armor. It was the same demo Jimmy Fallon showed off earlier this month. I held two PlayStation Move motion controllers and started swinging away. It took awhile for the PlayStation Camera to find the controllers, but once it did, things were fairly accurate. It was most impressive when simulating a bow and arrow. Not only could you turn your head to look at a target, you could take aim and shoot.

By far the coolest part of the demo was not while swinging or shooting, but while moving. Because a camera is tracking you, walking around in the real world translates to the digital. While looking at the practice dummy, I walked over to the side, and was able to observe it from all angles.

I don’t know if VR is much more realistic and captivating for people who can use both eyes, but it works for me. And that means I’ll be able to experience the VR future with everyone else.

Photo by BagoGames/Flickr (CC By 2.0)