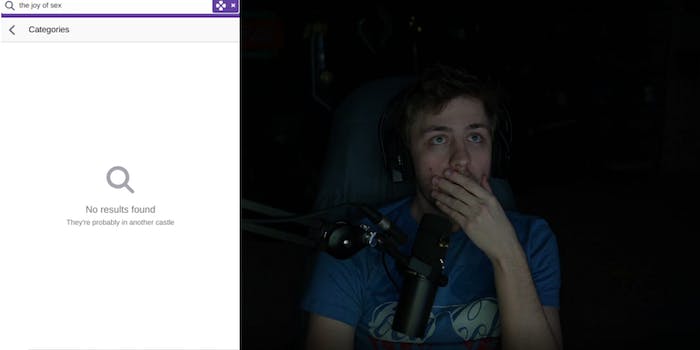 The category was used to test unlisted games.

A longtime favorite category is no longer on Twitch, and users want to know why.

The “Joy of Sex” category was removed from Twitch with no real warning this week. It may seem inappropriate, but this particular category was used by most gamers as a hub for stream-testing or trying out games not listed on Twitch. Its removal came as a shock to many users who’ve been using it for these purposes for years.

Streamers flock to the site to share videos of themselves participating in a wide range of activities. Twitch is home to a host of video game broadcasts, as well as cooking streams and people casually talking to the camera. This versatility keeps Twitch relevant. That’s why so many gamers were angry and confused when the platform abruptly killed the popular category.

One such user is Chance Morris, who goes by “Sodapoppin” on Twitch. Many of the games he streams are unlisted on the platform, so he has been a consistent user of the “Joy of Sex” category. He was midstream recently when he discovered its removal.

“They removed the ‘Joy of Sex’ on Twitch? I’m going to fucking riot,” he said. “Shut the fuck up. Do you have any idea how fucking proud I am that the majority of my hours streamed is under the ‘Joy of Sex’? I have worked for that, and to randomly have that taken away from me I swear to fuck.

“Why? Where is it? Explain,” he demanded of Twitch.

He was far from the first to notice. All the way back in late March, another user tweeted their displeasure with the move. “Twitch took away my damn ‘Joy of Sex’ category that I use for test streams,” they wrote.

Twitch took away my damn "Joy of Sex" category that I use for test streams…. Everything looks good though so next stream my PC shouldn't crash constantly like it has been pic.twitter.com/YBX4cp3PlI

Why was it removed, and what to use instead

Though the category is rarely used for this purpose anymore, The Joy of Sex is actually a game—an old educational game that technically violates Twitch rules on “adult only” games. It is likely for this reason that the category was removed. Gamers have another option though: Twitch recently added the “Games + Demos” category, which should fill the hole in terms of functionality. The new category is intended for unlisted games and test streams.

We’ve reached out to Twitch.