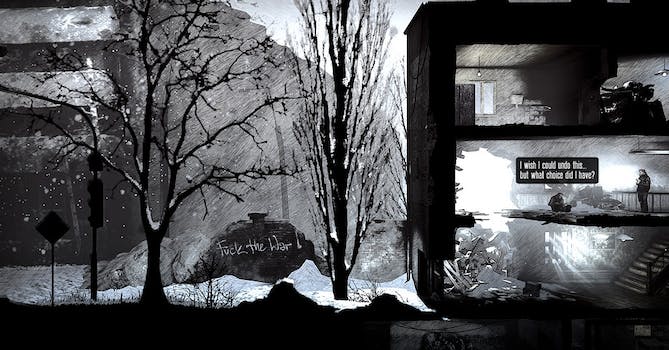 War is hell—especially for civilians caught in the middle.

It’s a survival horror game where the horror is real, and the apocalyptic nightmare is based on factual accounts. It also may be the most important indie game released this year.

This War Of Mine is the story of a group of civilians trapped by an urban war. They try to build some semblance of normality while desperately searching for supplies at night and deciding who lives or dies. The first official gameplay trailer and the Nov. 14 release day, were revealed yesterday.

The game is mostly played out in a 2D platformer type interface, drawn in grainy black and white art, with smooth, detailed animations. The player has to balance keeping their group warm, fed, rested, and healthy, using building materials and supplies gathered from neighboring buildings.

This War Of Mine is based on real-life accounts of civilians from Sarajevo, Kosovo, Libya,  and Syria, who were trapped in urban battlefields during recent conflicts. The game’s senior writer, Pawel Miechowski, also drew on stories told by survivors of the Nazi occupation of his native Poland during World War II.

The last we had a hands-on demo of the game at PAX Prime in August, a pair of children came to the door of our shelter and asked if we had medicine to spare for their mother, who was sick. We had just found a very small supply of meds on a nighttime search for resources, and were treating a member of our group who was ill.

We chose to turn the children away. It was heartbreaking, but we had to take care of our own. Every decision in This War Of Mine had potentially horrible consequences. When we found bullets for our weapons, did we leave the guns back at the shelter while people went out to scavenge at night, so the group could defend itself from raiders, or did we leave the shelter defenseless so that scavengers could go out armed?

We had to practice stealth in case we ran into strangers in neighboring buildings who were less than charitable about sharing what little they had, or had to decide whether to meet force with force and take whatever we could after killing someone. This War Of Mine has a brutal, strategic element, and requires smart resource management, but it is not a typical survival horror game. It is meant to present you with moral choices that are shades of grey, and to make you think about what’s missing from a game like Call of Duty, which shows you all the action and omits all the consequence.

This War Of Mine will be released on Steam and Games Republic on Nov. 14.