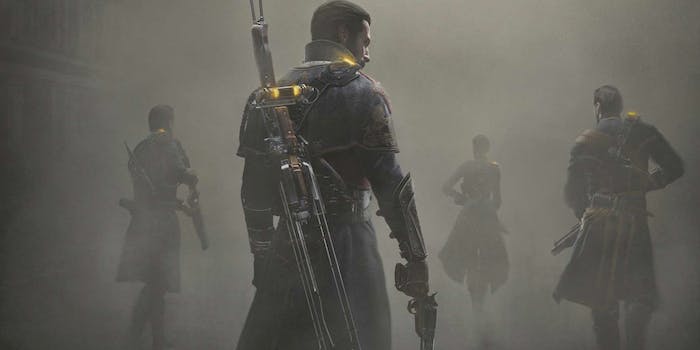 You'll find the imagery of the game stunning—and that's about it.

As the 21st century began and many of us transitioned from the original PlayStation to the PlayStation 2, I arrived at a thought: “Today’s non-interactive cutscenes are tomorrow’s gameplay.”

Games from the last eight or so years have greatly invalidated that idea, where the visual gap between pre-rendered cinematics and playable sections have narrowed. It has culminated in The Order: 1886, where the visuals during gameplay retain the same high fidelity of the cutscenes. This third-person shooter by Ready at Dawn is rife with moments where it’s hard to tell when the gameplay is suspended and when it resumes. In achieving a form of interactive cinema, The Order: 1886 technically succeeds by way of these seamless transitions. And it does so with lifelike visual design where well-treaded marble floors have lost their shine and coats flap in the wind with persuasive believability. Yet it is profoundly disappointing that these attributes are The Order: 1886’s only noteworthy features.

With a 1991 beat ’em-up by Capcom, a meaningful appearance in Final Fantasy VII, and a few games in between, Arthurian legend is not unfamiliar source material in this medium. By 2015, you’d think there would be more notable uses of this lore, which is at least worthy of half the same attention given to World War II games or the zombie apocalypse genre. The Order: 1886 is not a retelling of the Holy Grail quest in a Victorian setting but rather a mildly intriguing “what if” premise where the knights of the round table have become a fixture in English society, preserving order for hundreds of years as special operatives who serve Queen Victoria. Names like Galahad and Percival have evolved into designations that are a mix between codenames and ranks. Just as The Order: 1886 has one foot in the past, it has another in the future, taking creative liberties by timeshifting a number of technologies and gadgets a few decades before their real-life conception. 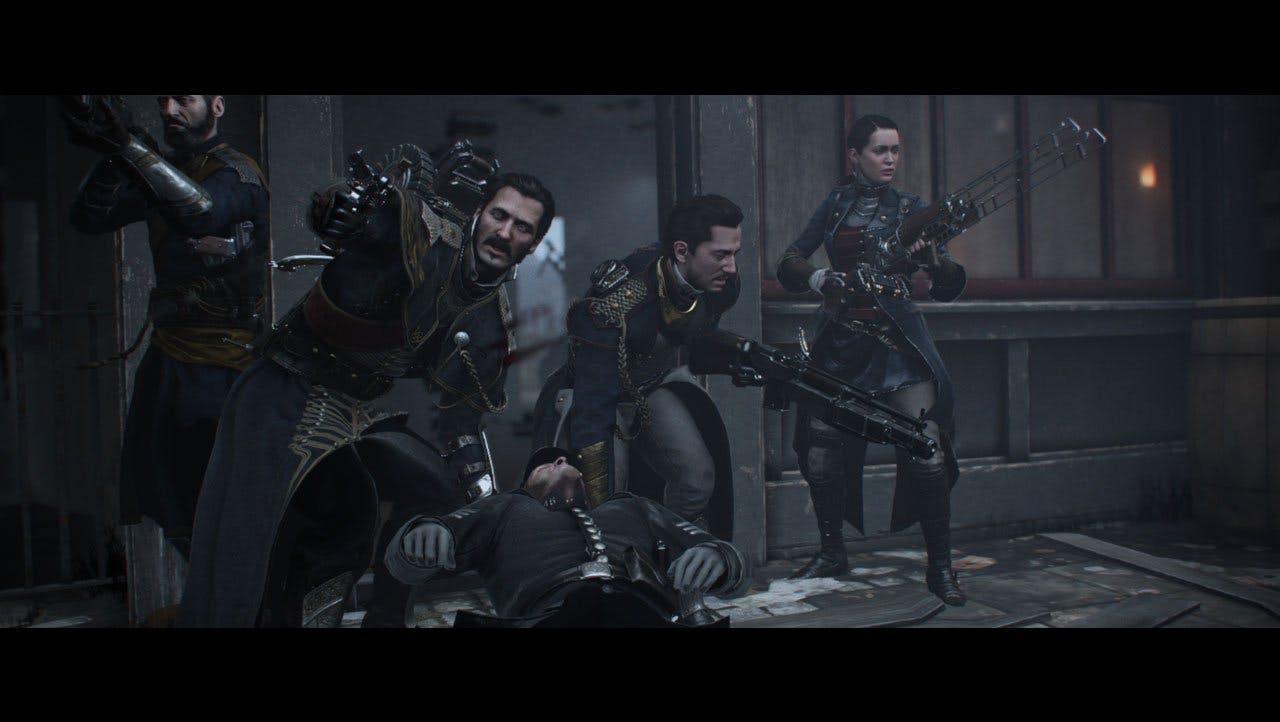 Much like its premise and setting, The Order: 1886 itself feels like a game from an alternate history. At its most convincing, it effectively feels like the middle installment of an ongoing third-person shooter series. This foursome of operatives exudes seasoned experience, participating in all kinds of gun battles for countless years. They exhale in profound resignation that there are numerous engagements in the future. It makes the story-mode enthusiast fantasize about a game industry where single-player games manage to sell well year after year without the need to shoehorn in a multiplayer mode separate from the campaign.

The Order: 1886’s world is not short of chivalry and manners, to the extent that you could describe it as having the charm of a Merchant Ivory film but with guns. It is not the first game where the protagonist opens a door for a lady and closes the door behind him, but never before has it been depicted with such gentlemanly grace.

Much like the polished inlaid wood flooring and the shiny copper pans hanging in an airship kitchen, The Order: 1886 is immensely rich in refined visuals. Even in the poorest settings or the messes created from bloody shootouts, there’s an unquestionable level of beauty, often found in decay. It was only last year that Infamous: Second Son impressed with its detailed depiction of puddle-saturated Seattle roads. Now those small pools of water feel dated when held against the puddles in The Order: 1886.

The extent to which The Order: 1886 celebrates antiquated Englishness brings to mind a monologue by comedian Eddie Izzard. In one bit, he succinctly points out the “folded-in” nature of many British films, where characters are preoccupied “moving books slightly to the left.” Such banal acts aren’t in The Order: 1886, but some moments come close. There’s often little point to inspecting the immediate surroundings; the matte sheen of an inconsequential photo held against the light at different angles can only impress for so long. 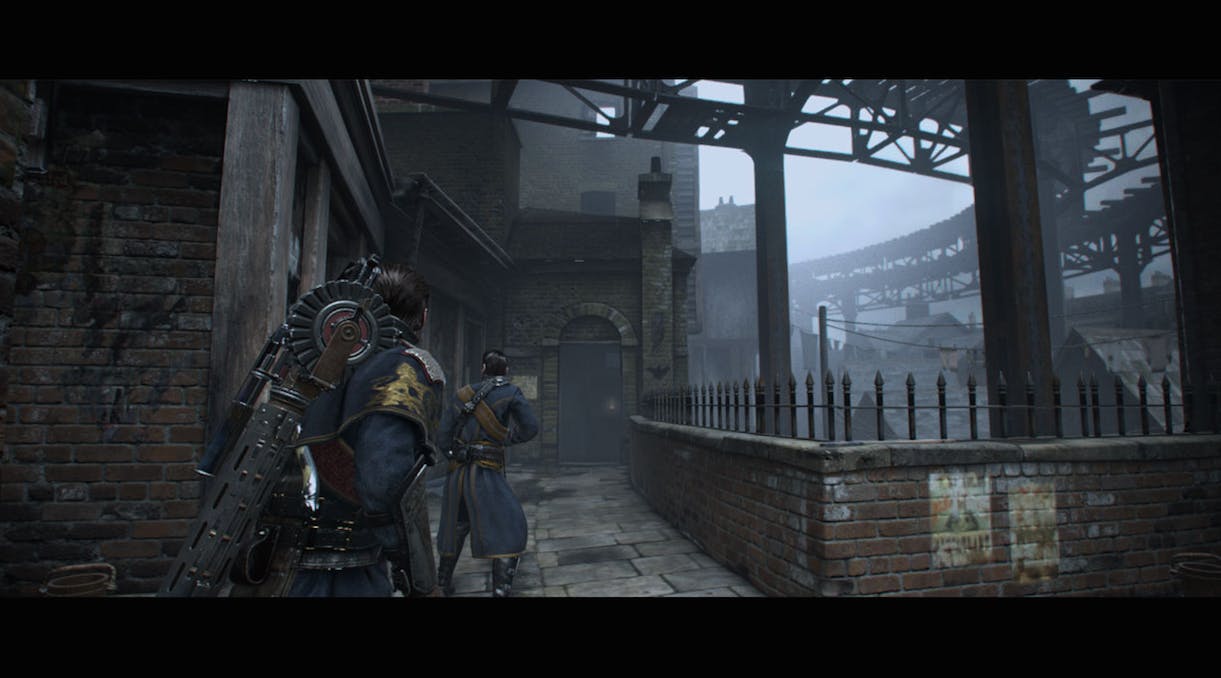 Ready at Dawn’s focus on a cinematic experience is felt in the absence of a player progression system like a skill tree or an ability shop. Opting for this simpler approach isn’t innovative, let alone a welcome throwback. As the Gears of War series proved, depth in gameplay is wholly possible without having to worry about stats to upgrade or abilities to learn. It’s all about firepower management, knowing how to best use ammo while taking advantage of all the enemy drops in your immediate area. You see hints of promise while wielding Nikola Tesla’s more lethal inventions in The Order: 1886. Its version of an electro-charged railgun is aptly lethal (provided you have the time to charge up an attack), while a fire-spreading thermite gun is more flashy than effective.

Co-opting intriguing source material like the legend of King Arthur is easy. But it doesn’t add up to much if your game is bereft of nuance and creativity. Gears of War succeeds not just by mixing up different types of combat situations, but also by drenching its game world with inventive environments. That’s not to say The Order: 1886 should have something akin to the imaginative rainstorm of glass in Gears of War 2, but gun battles in London back alleys and bridges aren’t exactly creative. I can’t even blame its linear level design, since many shooters like the Call of Duty series have often proven that there are ways to infuse inventiveness in hallway combat. The Order: 1886 is deeply lacking in such moments. Beyond its painfully standard-issue shootouts, I often looked to the game’s other interactive features in the hopes of finding some signs of originality. Among the lockpicking, quick-time events, and general level exploration, I found no such thing.

Much like Beyond: Two Souls and other proclaimed cinematic games, if the experience is intended to be appreciated like a movie, then it should be judged like a film. The Order: 1886 is more cohesive than the 15-year story arc of Quantic Dream’s last effort, but cohesion doesn’t automatically result in a compelling experience. It succeeds so well in playing out like the middle episode of an unmade series that it forgets to delve deeper into the otherwise fascinating Arthurian lore and its 19th century context. When handed the controls, I often felt like a visitor—a tourist merely passing through a place that is the cross between a museum and gentleman’s club. The Order: 1886’s stunning photo-realistic visuals serve as one of its few highlights, with no memorable combat or other forms of noteworthy gameplay to complement the incredible artistry.

Disclosure: The copy of The Order: 1886 used for this review was provided by Sony Computer Entertainment.