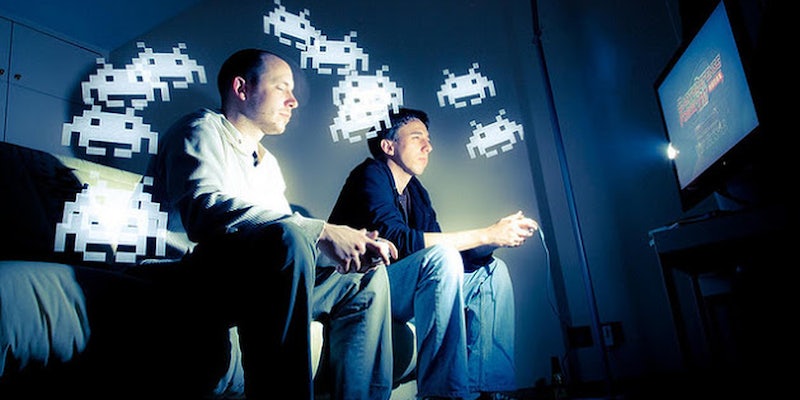 Too much gaming can make you see strange things

The "Tetris effect" is real

Ever got a little carried away after an extended gaming session and started to see the world in Minecraft pixels? Or imagined World of Warcraft health bars for IRL people? Or the road transform into a Guitar Hero fretboard while you’re driving along? Apparently, you’re not alone.

Research published in a 2014 issue of the International Journal of Human-Computer Interactionhas looked at the phenomenon of gaming-induced pseudo-hallucinations, or what’s more scientifically known as game transfer phenomena (GTP).

The authors, psychologists Angelica Ortiz de Gortari and Mark Griffiths of Nottingham Trent University in the U.K., explained the range of effects as follows:

GTP manifest as altered sensorial perceptions, automatic mental process, automatic actions, and behaviours. GTP occur spontaneously and usually without gamers’ control. They can occur while gaming, immediately after stopping play, or after some delay. GTP are explained by physiological, perceptual, and cognitive mechanism that results from the exposure to a virtual environment for certain periods.

While the concept of GTP has been around a while—it’s also sometimes referred to as the “Tetris effect”—they believe their study is the first to look at altered perception across a large group of gamers. They also point out that, as video games get more and more immersive, it’s more important than ever to understand how they might influence our perceptions.

To gather data on gamers’ experiences of GTP, the researchers searched for related posts on 54 gaming forums, and came up with 656 instances in which members described the hallucination-like effects. They covered 181 different video games, from tile-matching games of the Tetris ilk to massive RPGs like World of Warcraft. A database then coded and quantified these logged experiences to analyse them more closely.

They found that most gamers mentioned they’d been playing for a long, or very long, time before experiencing the hallucinatory effects, and that the visual disturbances themselves usually only lasted a few seconds—though in some cases remained for days.

Read the full story on Motherboard. Photo via Patrick Brosset/Flickr