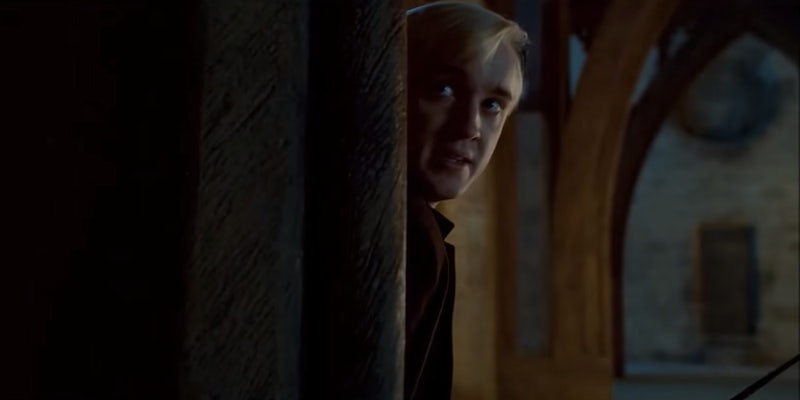 Honestly, it could be worse.

Though for years we’ve speculated that J.K. Rowling didn’t quite admire the villainous Draco Malfoy as much as we do…

…in her latest story for Pottermore, we find out that’s not quite the case! No spoilers here, but trust us – ol’ Jo Rowling turned sympathetic toward the Slytherin in her later years. And why wouldn’t she? Malfoy is amazing.

Now that he has his creator’s official approval (okay, fine, technically she calls admiring Draco an “unhealthy fantasy.” But whatever! Rowling’s not the headmistress), here are 11 reasons why it’s completely understandable that you still have a thing for Draco Malfoy.

Draco Malfoy’s silken strands entered your life at a very important developmental stage. Whether you coveted his flaxen tresses or wanted to run your hand through them after Potions class ended, Draco and his shimmering, golden head are forever linked in your mind.

Putting aside the description of his “pale, pointy” face throughout the series, Draco was a tall, trim dude who could rock a slim-cut pair of dress robes. Plus, the dark-tones-only approach to his wardrobe really complemented all of that internal brooding.

The debate rages on as to whether Lucius Malfoy paid for Draco’s way onto the pitch, but Draco endured as a Seeker on Slytherin’s competitive House Quidditch team for as long as he attended Hogwarts.

4) Your thing for Tom Felton clouds your judgment

I'd be a pro golfer by now if @Mattdavelewis would caddy for me full time x pic.twitter.com/W7iDAA0Gc1

The man loves dogs, goofs on Harry Potter, and apparently hangs with the likes of Neville Longbottom. He can dress for the red carpet and recently popped up on a cable channel crime series where he spoke with an American accent.While early-era Draco oozes sliminess, Tom Felton radiates nothing but charm.

Not that you can’t love a poor person! We’re just saying, the Malfoys have a lot of money. And apart from keeping up a scary mansion and buying Draco nice clothes, it doesn’t seem like they’re doing much with it. Draco could take you on spur-of-the-moment trips across the world, buy you tickets to every Quidditch World Cup between now and infinity and get you the fastest broomstick on the market. Or whatever you’re into.

6) You also like characters that could be considered ‘worse’

Sorry, but that crush you have on the Marauders is extremely weird. James Potter was a jerk and there really isn’t any way around it. However, the actor chosen to portray Tom Riddle in “Harry Potter and the Chamber of Secrets” was pretty handsome. Uh, we mean, charismatic….

Dragon! DRAGON! Dragon Malfoy! It doesn’t get any cooler. Even his own son’s name, Scorpius, doesn’t hold a candle to Draco. For varsity league nerds, his name even appears in the appropriately kooky Hogwarts motto, Draco dormiens numquam tilliamus. In English: “We must never tickle a sleeping dragon.”

8) He’s dramatic, so he understands you

Alright, so, he loves attention. Whether he’s faking injury or flat-out lying to a professor, he’s used to getting his way. But you know what? These are normal, human qualities. So you let him act out when he wants, and he’ll understand when you throw a temper tantrum over nothing. You’re just two divas in a pod.

Despite a dramatic exterior, Draco’s internal life is full of turmoil. While he may be angry, confused, jealous and boastful at various turns — like any other teen, we’d like to add — he’s also sensitive and loyal, and wants to please everyone around him. He works hard to make it look like he doesn’t care about anything, but we know the real story.

10) He survived being raised by Lucius and Narcissa Malfoy

Lucius and Narcissa Black Malfoy are not good people. They do not believe in good things, and they did not raise only child Malfoy to be a particularly good person. They instilled upon him dangerous and hurtful values, aligned themselves with Lord Voldemort and allowed Draco to be put in a position — killing his headmaster, Professor Dumbledore — that was doomed from the beginning. But, in the end…

According to J.K. Rowling herself, Draco thumbs his nose at his upbringing and everything his parents hold dear. He doesn’t care about keeping wizarding bloodlines “pure.” He marries and raises his children with inclusive ideals. He may not become best friends with Harry and the Gryffindor gang, but he turns out so much better than most people would expect. Also, you guys, he doesn’t kill Dumbledore.

Love Draco? Hate him? Did we miss any crucial reasons? Let us know in the comments!