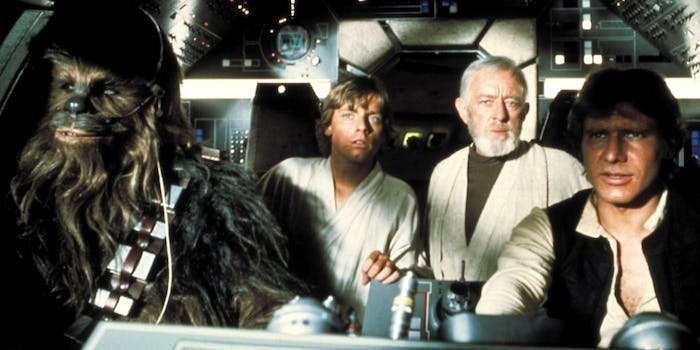 Could it be Lupita Nyong’o?

On the other hand: Bad news, Star Wars producers! Half of your audience is annoyed with you now, because you made it seem like there were only two women in the thirteen-person cast of the upcoming Episode VII.

Here’s what happened on Tuesday: Lucasfilm announced the seven new actors who would be starring alongside the old Star Wars cast in J.J. Abrams’s new movie. Then Twitter exploded, because only one of those actors was a woman, meaning that the new movie was even more male-dominated than the original trilogy. By casting John Boyega in what may be the lead role of the movie, it was as if Abrams was taking one step forward in updating the white boys’ club of the Star Wars universe… and then immediately taking one step back again.

The lack of women was troubling, made even worse by the fact that the only new female character was being played by a young white actress. This also clashed with the ongoing speculation that Lupita Nyong’o was in talks for a role in the franchise. Did her absence from the casting announcement mean that Lucasfilm had done the unthinkable and rejected Lupita Nyong’o? Well, on Tuesday night we theorized that one more female character may still be announced, and it looks like that is actually still on the cards, according to a report in the Hollywood Reporter.

This probably won’t do much to combat the frustration felt by fans who were hoping for more gender parity in the main cast, but two new female characters is better than one. And more importantly, it looks like this new character will be the first woman of color to receive a lead role in a Star Wars movie, because the two actresses rumored to be up for the role are Lupita Nyong’o and newcomer Maisie Richardson-Sellers.

The question is, why on earth didn’t Lucasfilm mention this at the same time as their first casting announcement? Talk about starting things off on the wrong foot.

If Lucasfilm waited and announced Nyong’o or Richardson-Sellers at the same time as the rest of the cast, the complaints about J.J. Abrams’ perceived sexism would’ve quieted to a mere grumble. Star Wars fans want to be optimistic about the new movie, and announcing a woman of color for a lead role would’ve sent a positive message to the many, many fans who don’t fit the original trilogy’s target demographic of young, white, male nerds.

Considering the timing, it seems likely that that mysterious female character announcement will take place on May the Fourth, Star Wars Day. Fingers crossed.