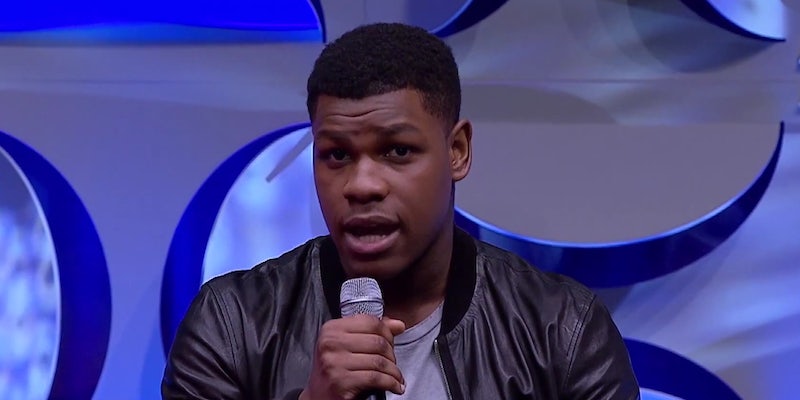 Did you see 'The Force Awakens' star John Boyega hiding in the crowd at Celebration?

If there’s one place where John Boyega, the 23-year-old star of Star Wars: The Force Awakens, can’t walk around without being recognized, it’s a Star Wars convention.

Boyega attended the kickoff event of Star Wars Celebration Anaheim, a four-day convention in Anaheim, Calif., last week, to help The Force Awakens director J.J. Abrams present the film’s highly anticipated second teaser. Then, at some later point during the convention, he decided to walk the show floor.

Boyega is still months away from becoming a household name thanks to Disney’s blockbuster Star Wars sequel, but with tens of thousands of Star Wars fans he knew he’d have to wear a disguise.

Boyega even stopped to duel with a fellow fan. His opponent is no doubt sharing this photo with everyone he knows.

We highly recommend following Boyega on Instagram and Twitter for updates from The Force Awakens‘ press tour and Boyega’s proudly nerdy life.

Screengrab via Flicks And The City/YouTube