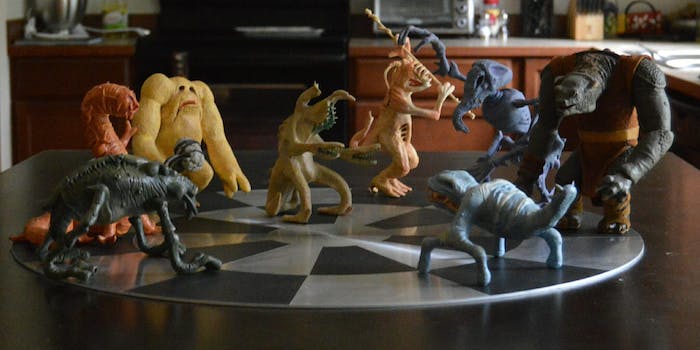 Chess fans and Star Wars fans have long found a common love in the fictional game of Dejarik, aka “holochess,” played by a set of furious and fantastical creatures (called holomonsters) on a holographic board.

The Internet is teeming with attempts to recreate the famous chess set from A New Hope, but one fan just put his competitors in checkmate.

Dejarik Creations is the brainchild of Ian Martin, a Star Wars fan who focuses on making “Creatures & Props from the Star Wars Universe in my garage.” On Wednesday, Martin revealed the results of nine months of labor: a full set of holochess monsters painstakingly assembled from 42 3-D printed molds and 75 pieces.

Over the course of the year, our tireless creator has churned out more than one hundred individual Star Wars creatures assembled from nearly a thousand parts.

Best of all, Martin is already well on his way to turning his chess pieces into actual holograms, thanks to a bit of augmented reality.

Check out the complete gallery of Martin’s holo-creatures below.

If this is the kind of thing he builds for fun in his garage, we’d love to see what he could do with a whole business. Given how popular his chess set is, that seems plausible—one of his recent figurines is currently for sale for a tidy $1200.