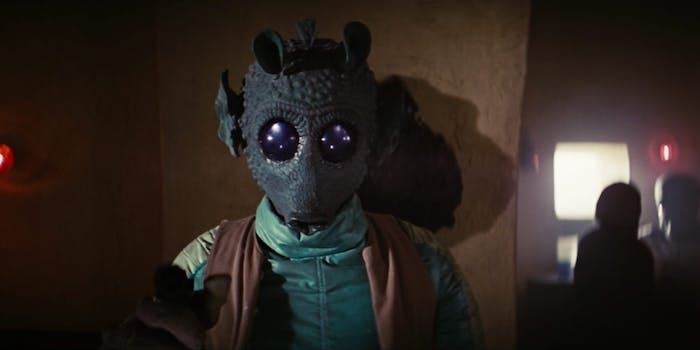 The launch of Disney+ on Tuesday had its series of highs and lows between several brand new shows, a plethora of older films to revisit, and a glitching app. But the biggest shocker came after fans discovered the latest edit to A New Hope—and nobody was more surprised by it than the actor at the center of the scene’s latest edit.

The “macklunkey” heard around the world, which is said by the Rodian bounty hunter Greedo right before he and Han Solo shoot at each other, isn’t new in the sense that Lucasfilm recently tweaked the infamous scene. Disney+ confirmed that the edit came from George Lucas himself and occurred several years ago. We just happen to be seeing it for the first time now.

For the actor who played Greedo, Paul Blake, it was entirely news to him; another actor, Larry Ward, provided the voice of Greedo in the film.

“I couldn’t understand a word of it,” Blake told Empire magazine. “It confused me incredibly, but I’ve never understood anything about the movies anyway, particularly that. The convention I’ve just come back from, I had a million opinions from everybody. This new word!”

He later explained that when he originally shot his scenes, the script had dialogue for Greedo—who was just known as “The Alien”—in English and was more or less a “simple, straightforward cowboy scene” in which one person demands money from another.

But ultimately, Blake only found out about the latest scene change—the Han and Greedo standoff has been edited a couple of times over the years—through another Star Wars cast member.

“Mike Carter, who plays Bib Fortuna, the guy in Jabba’s palace with the strange long ears, he texted me and said, ‘MACLUNKEY!’” Blake said. “I said, ‘What the fuck are you talking about?’ He said, ‘New discovery! It could be as important as Howard Carter and the Tutankhamun tomb.’ I didn’t know what he was talking about for 10 minutes, until I had a look at the scene and thought, ‘Oh right, yeah.’”