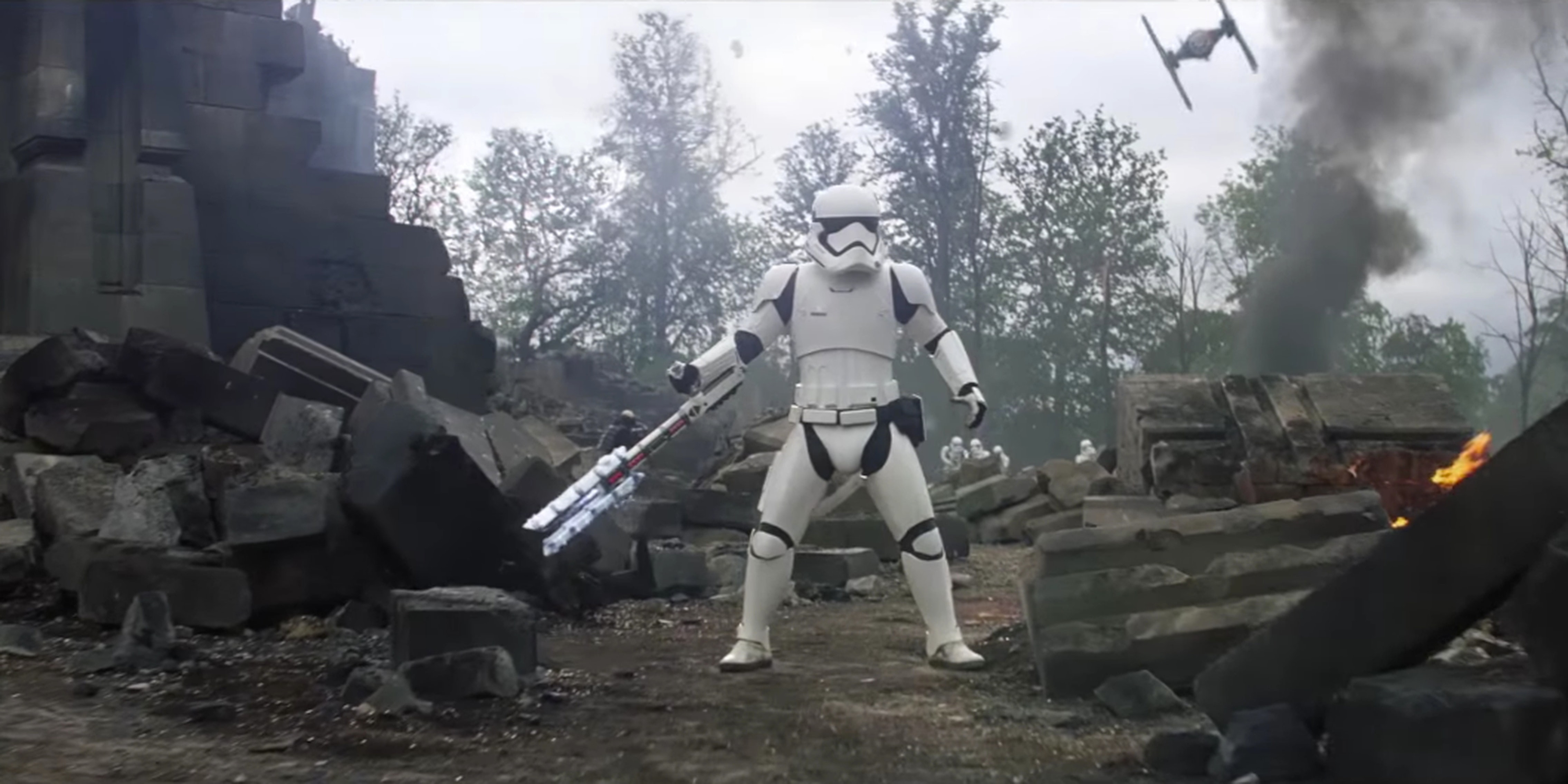 The strange saga of ‘TR-8R,’ the Internet’s new favorite stormtrooper

He's only in the movie for a couple of minutes, but he made quite the impact.

He only had one line and a few minutes of screentime, but a new character in Star Wars: The Force Awakens managed to take over the Internet anyway—and now he finally has a name.

During the Battle on Takodana, Finn—who was given Luke Skywalker’s lightsaber for safekeeping by Maz Kanata—encounters a riot control stormtrooper armed with a super-cool baton that even a lightsaber can’t cut. Unlike the other stormtroopers Finn kills in the battle, this one instantly recognizes him.

“Traitor!” he shouts as he lights up his riot control baton.

He went down only minutes later, thanks to a shot by Han Solo using Chewbacca’s bowcaster.

At first glance, this guy was just another nameless stormtrooper. But the Internet transformed him into the latest viral star—and something well beyond his original purpose.

Star Wars fans have a long history of taking minor characters from the movies and transforming them into fan favorites, from Wedge Antilles and Boba Fett in the original trilogy to Tumblr’s new favorite X-wing pilot Jessika Pava in The Force Awakens. So it was unsurprising when the Internet embraced this stormtrooper and dubbed him TR-8R.

TR-8R has appeared in official trailers, so it was easy to transform him into a meme big enough to earn him his own subreddit. And the GIF possibilities were endless. Now Finn was the villain of his own story—and John Boyega even got in on the fun.

But even with all the memes, the Internet still didn’t know who exactly this stormtrooper was.

Polygon’s Susana Polo posited that TR-8R wasn’t just a random stormtrooper; rather, she wrote, he was one of the three stormtroopers who trained with Finn (then known by his stormtrooper designation, FN-2187) in Greg Rucka’s tie-in novel Before the Awakening.

In that book, set just before the events of the film, Finn is the leader of a four-man squad that also includes FN-2199, FN-2000, and FN-2003, often called by their nicknames Nines, Zero, and Slip, respectively. While they all get along, Finn feels like an outsider.

We already knew that Slip—the stormtrooper who kept screwing up to the point where Finn tried covering for him—died on Jakku at the beginning of the movie, thanks to Star Wars: The Force Awakens: The Visual Dictionary. If TR-8R was part of the squad, he was either Nines or Zero.

As for the man behind the mask, that was a little less obvious. For a short time, fans believed that an actor named Alex Rolt had played the stormtrooper. Peter Mayhew (Chewbacca) even mistakenly credited Rolt with the role. But the Star Wars subreddit quickly disproved Rolt’s claims, pointing to a video that showed Boyega training with a stuntman and an interview with Boyega and Daisy Ridley in which they identified the man as Liang. (Rolt later deleted his social media presence.)

He had one line, a cool weapon & instant stardom. Learn the identity of #TheForceAwakens trooper known as TR-8R. https://t.co/SSCX5DzEHb

Nines can be seen watching Finn train under the watchful eye of Captain Phasma in Before the Awakening; he’s the redhead on the left in the picture, which appears in the post on the official Star Wars website. That explains why he was so angry when he encountered Finn.

“Let’s hope we haven’t seen the last of Nines,” the StarWars.com team wrote. “Or TR-8R. Who wouldn’t want to see Round 2…and all the memes it could inspire?”

While Chewbacca’s bowcaster probably put an end to Nines, we do know that TR-8R will always live on in our hearts—and in our memes.