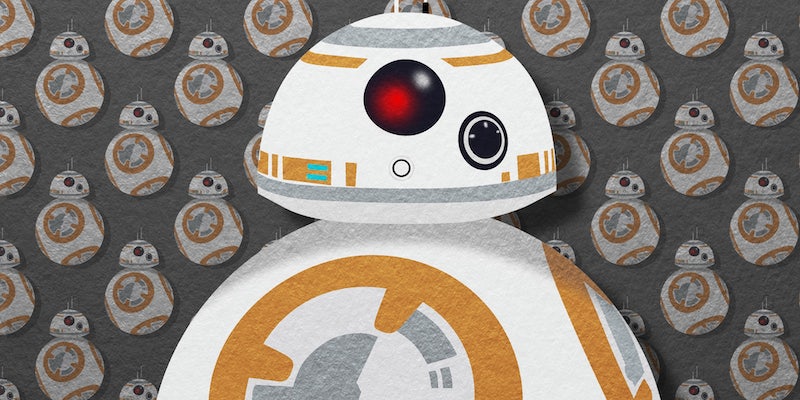 Are lightsabers allowed at your ‘Star Wars: The Force Awakens’ screening?

After more than two years of waiting, Star Wars: The Force Awakens is finally within our grasps. We already have our tickets, we’ve meticulously plotted our screening nights (and eventual freakouts online the next day), and early reviews are largely positive. All we have to do now is wait.

However, if you’re planning on donning a costume to your screening in order to get into the Star Wars spirit, you may need to do just a little more prep.

With the number of mass shootings on the rise—and movie-theater shootings in Aurora, Colorado, and Lafayette, Louisiana, fresh in our minds—theaters all over the country are trying to ensure that patrons have a safe and enjoyable experience. And for a film that boasts characters wearing masks, wielding lightsabers and blasters, and face paint, that may mean sacrificing some costume accuracy in order to see the film.

But which places are you able to go full Kylo Ren or Captain Phasma? We’ve gathered info from some of the largest chains in the U.S. and the U.K. since it varies, but if your local theater isn’t on this list you should call ahead to find out your theater’s costume policy.

If your screening is at the largest theater chain in the U.S., be prepared to leave your hoods, lightsabers, and blasters at home. If you want to wear a mask, you’ll be expected to take it off once you enter the theater.

@YinYangPhoto Cosplay is welcome- just no mask wearing or weapon-like props in theatres though.

Last month, an AMC Theatres spokesperson confirmed to Entertainment Weekly that for The Force Awakens, it would be implementing its usual costume policy—which has been in place for years. AMC doesn’t allow masks, face paint, or fake blasters, but lightsabers are more than welcome before the movie begins.

For fans who are purchasing tickets through AMC’s website, the policy is plainly stated on the same page as the main Force Awakens hub so customers won’t have to go through the website in order to find it. 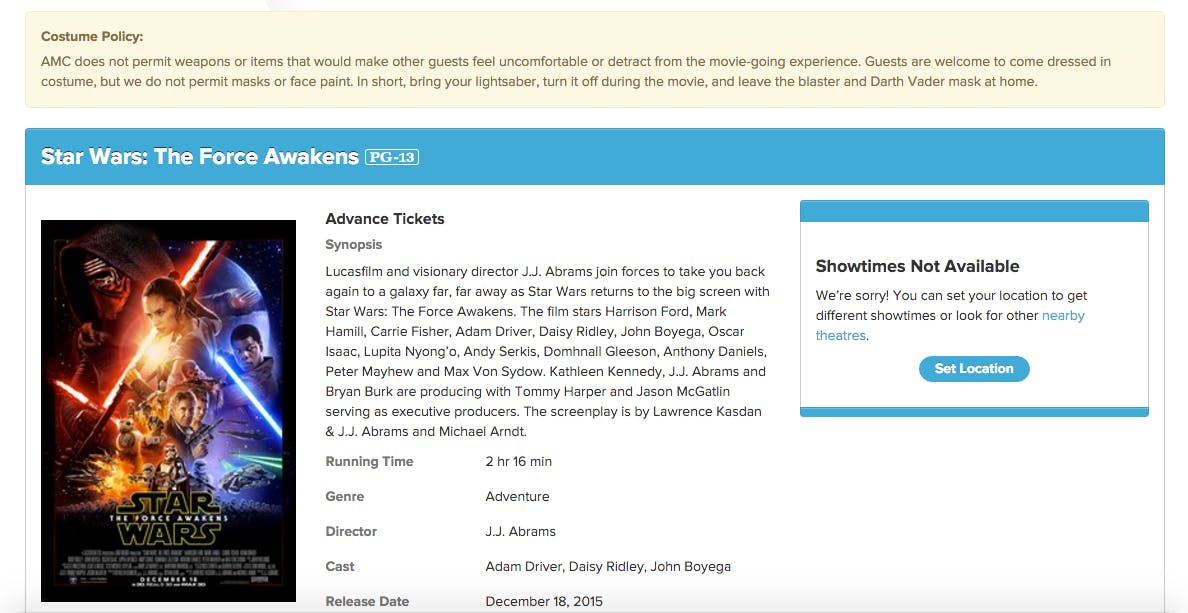 Customers purchasing tickets at Cinemark theaters were greeted with posters clearly stating its costume policy. You can wear a costume, but masks, face paint, and blasters aren’t allowed. Unlike AMC, Cinemark is also banning lightsabers from its screenings.

Carmike doesn’t appear to have an official policy, but some local theaters are telling patrons to leave toy weapons (lightsabers, blasters) at home while costumes are perfectly fine. According to the Chicago Tribune, the Carmike Cinemas in the area allow costumes but they may be inspected upon arrival.

Cineplex welcomes costumes at its Star Wars screenings, but you should leave any masks or weapons at home—or anything that could be seen as a tripping hazard.

“If you do bring them, they have to be small because they have to be able to sit on your lap for the whole time,” Pat Marshall, Cineplex Entertainment’s vice president of communications, told CTV News. “We just want to make sure people don’t trip and fall or catch themselves on toys, so they can’t be lying in the aisle.

From Dec. 17-20, patrons at Santikos Theatres will be able to cosplay their hearts out while attending The Force Awakens screenings, but there are restrictions. If you want to wear a costume, you’ll have to check in with security (and temporarily remove your mask), leave the blasters at home, and your costume can’t be disruptive for other patrons. Lightsabers are perfectly fine, but remember to turn them off when the movie starts. 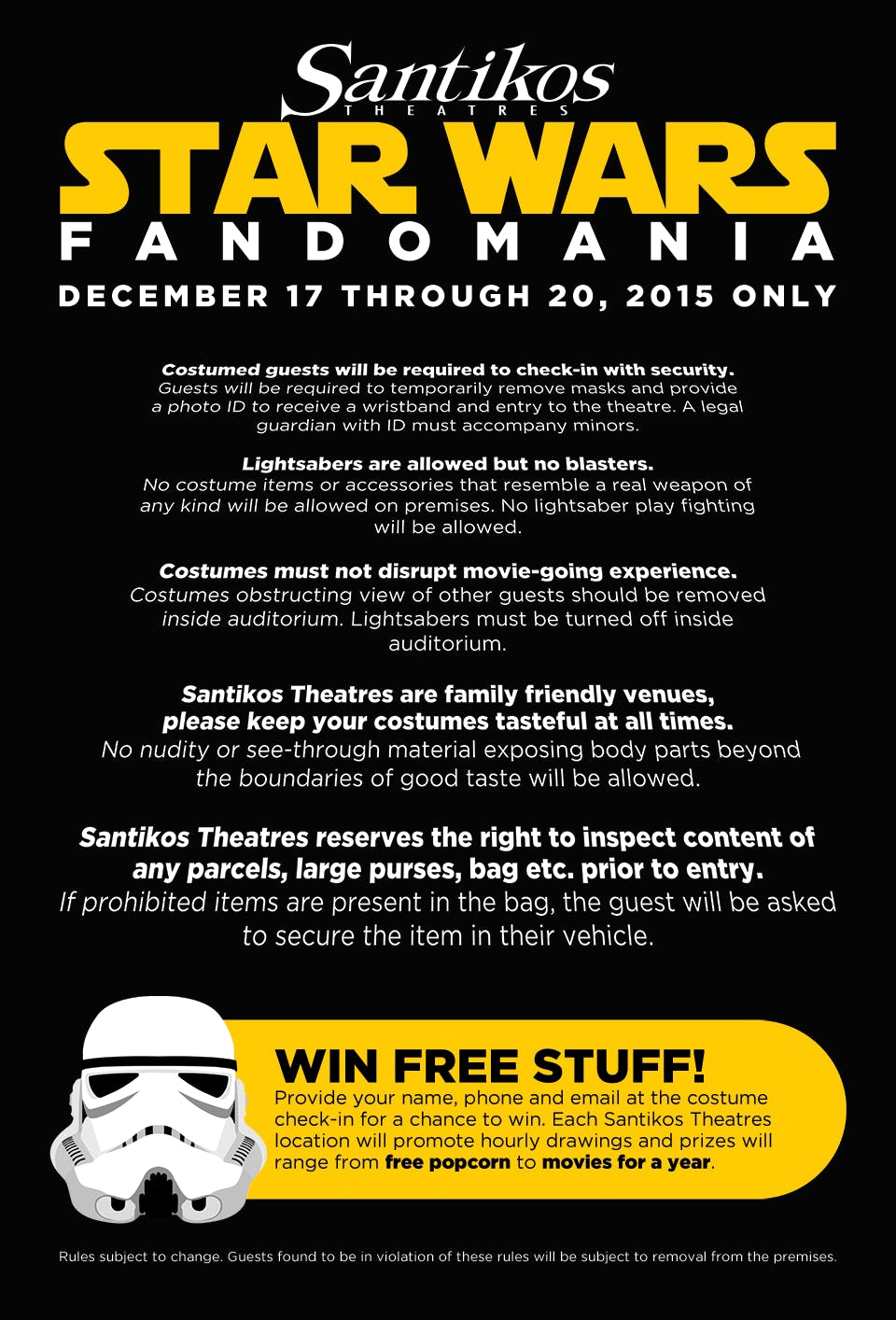 Alamo Drafthouse is welcoming all sorts of cosplay—and unlike most theaters, it will even allow blasters and lightsabers. Just don’t ruin the experience for everyone else, or else you may find yourself kicked out of the theater.

The U.K theater chain is asking fans to leave anything that looks like a real weapon at home and to avoid costumes that might obscure the view. Most costumes are permitted, but you’ll need to remove your mask upon entering the screening and to turn off your lightsabers.

Vue is leaving the final call on its costume policy to its Duty Managers, so check with your local theater to determine what to leave at home. It does ask customers to avoid wearing items that might “offend a family audience.”

Cineworld sent out an email to customers prior to the screening that advised them to leave “replica firearms” at home, and while it didn’t ban masks you’ll need to remove it in order to be identified by staff.