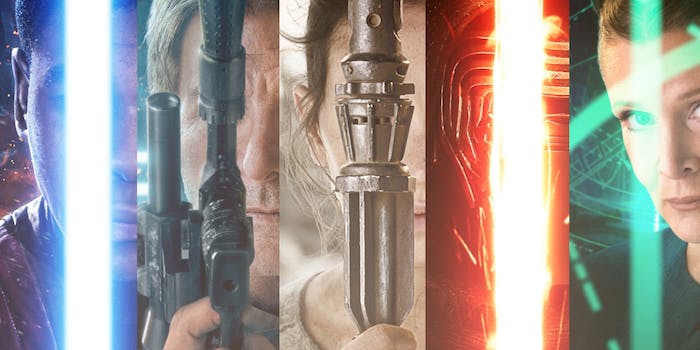 The Star Wars: The Force Awakens character posters are here, and they’re certainly an eyeful.

While the main poster for The Force Awakens, which debuted last month prior to the release of the final trailer, gave us a display ripe for analysis, the five newest posters featuring Finn, Rey, Han Solo, Leia Organa, and Kylo Ren are leaving us with just as many questions.

John Boyega prepared us for the reveal earlier in the day when he teased that he had “a sneaky gift” for Star Wars fans.

I've got a sneaky gift for SW fans today. Watch this space #TheForceAwakens

Each poster has more or less the same feel: All of the characters are staring straight ahead, and their right eye is obscured by something, whether it be a light or weapon of choice. (We presume they’re not practicing for an eye exam.) The official Star Wars website also offers high-quality versions of the posters.

Oh Luke, don’t ask for the moon, we have the force. #TheForceAwakens pic.twitter.com/TBOCASFsy0

We may get more character poster in the weeks leading up to The Force Awakens (Peter Mayhew is certainly hoping), but for now let’s tackle the pressing questions on our minds.

Luke Skywalker’s presence has been almost nonexistent in all of the Force Awakens trailers to date (although someone kindly tried to fix that), he’s missing from the main Force Awakens poster, and he doesn’t have a character poster.

“These are good questions,” director J.J. Abrams told the Associated Press when reporters asked about the lack of a certain Skywalker in the trailers. “I can’t wait for you to find out the answer.”

I’m sure we’ll understand just why he’s not on the poster come Dec. 18, but still. It’s disconcerting.

Some fans tried to give Luke his own poster anyway, with at least one fan alluding to the theory that Luke is actually Kylo Ren.

this Luke poster is pretty neat too pic.twitter.com/8UZsSECYQx

The graphics behind Leia suggest it could be something like battle coordinates or plans to something like the First Order’s Starkiller Base. While the green light slightly obscuring Leia’s right eye is the same color as those graphics, it brings to mind another green light in the original Star Wars trilogy.

Although it’s not the same color as the lightsaber Luke built after losing his first one (which Finn appears to have gained), there’s already a considerable number of fans hoping that Force sensitive Leia finally gets her own lightsaber.

3) Is Rey’s poster not all that it seems?

Finn and Rey’s weapons are the focus of their posters: Finn has a lightsaber while Rey holds her staff. But a Duracell commercial featuring a young girl dressed like Rey appears to suggest that Rey is Force sensitive.

She may be a scavenger on Jakku, but she could become much more.

4) Han Solo is just as scruffy-looking as ever

We’ll have to wait and see about whether he’s still a nerf-herder though.