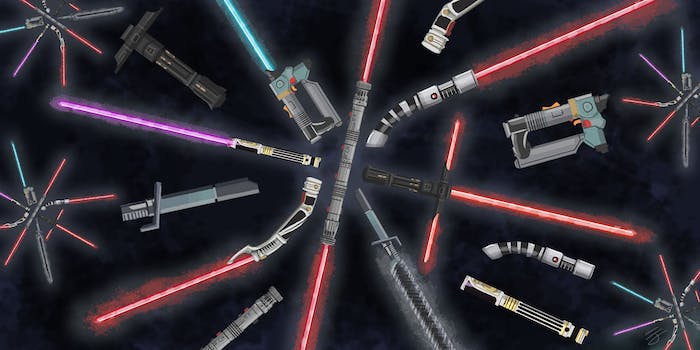 The 7 most memorable lightsabers in ‘Star Wars’

These lightsabers will not be forgotten, even if they are from a long time ago.

Lightsabers are an integral part of the Star Wars universe, appearing in every form of media that the franchise has to offer. When you see a lightsaber, you immediately think of the heroes or villains who wield them and the saga to which they belong. They are, as Obi-Wan Kenobi said in A New Hope, an elegant weapon for a more civilized age—and ever since fans first glimpsed them, we’ve been obsessed.

Over the years, the look of lightsabers has changed from the blade that Obi-Wan handed Luke Skywalker on Tatooine. As the Star Wars universe has grown in TV, books, comics, video games, and other areas, lightsabers have morphed into a number of different designs, featuring everything from different blade colors to different hilt styles.

While unique takes on the lightsaber stand out—like the guard shoto and the sabercane—some lightsabers are truly unforgettable. It’s hard to choose the very best of these legendary fictional weapons, but we decided to give it our best shot before we see Kylo Ren put his own iconic crossguard lightsaber to use in The Force Awakens on Dec. 18. Here are the seven lightsabers that we think are the most memorable and iconic in Star Wars.

Darth Maul was the first to wield this double-bladed weapon on the big screen and forever alter our idea of a lightsaber duel in The Phantom Menace. Since then, double-bladed lightsabers have continued to appear in various Star Wars media, like the TV shows The Clone Wars and Star Wars Rebels. Used by both Jedi and Sith, this type of lightsaber adds a whole new element of danger to the weapon by introducing a second blade. Add in other factors—like the Rebels Inquisitor’s spinning variant—and the fun with this design never ends!

In the movies, lightsabers were normally either green, blue, or red. All of that changed in Attack of the Clones when Jedi Master Mace Windu ignited a magnificent purple lightsaber. Actor Samuel L. Jackson has since explained that he asked George Lucas for a purple blade and Lucas initially said no. Eventually, though, he did give Jackson a purple lightsaber, and we are sure glad that he did! Not only does it help the amazing Mace Windu stand out from his fellow Jedi even more, but the color looked amazing on screen. This writer will admit, she’s only ever wanted a purple lightsaber since!

When the Separatist leader Count Dooku appears in Attack of the Clones, he’s holding a very different type of hilt from the ones wielded by the Jedi he encounters. Dooku, played by the late Christopher Lee, holds a curved hilt instead of a straight one. This was a design unlike any we’d seen in the films before, and it clearly influenced the way the ex-Jedi used the weapon, which made watching him fight even more interesting. Dooku’s acolyte Asajj Ventress also adopted the hilt style, as we see in The Clone Wars. Both of her lightsabers have curved hilts and can even be connected to form a double-bladed lightsaber!

Street-urchin-turned-Jedi-apprentice Ezra Bridger, the star of Star Wars Rebels, made his lightsaber an even more useful weapon by combining it with a blaster. By integrating a blaster into the hilt, Ezra can easily use one or the other, or a combination of both, depending on the situation. The hybrid is a fun take on the lightsaber design and a great idea for the time period between Revenge of the Sith and A New Hope. After all, a lightsaber would quickly reveal this hiding Jedi to the Empire. With a blaster built in, Ezra can ignite the blade only when necessary but still use the other part of the weapon without worry. While not exactly a lightsaber, the lightwhip offers a distinct twist on the idea that is not easily forgotten, and that earns it a spot on this list. This weapon’s blade is flexible—as one might expect from a whip—and can be different colors like a traditional blade. Both Jedi and Sith wielded lightwhips, though perhaps the best-known wielders are dark-siders Githany and Lumiya in the Expanded Universe.

If lightsaber blades could be purple, then why not black too? The darksaber, with its stunning black blade, debuted on an episode of The Clone Wars in the hands of Mandalorian Death Watch leader Pre Vizsla. Vizsla told Obi-Wan Kenobi that the darksaber had been passed down ever since it was stolen from the Jedi by Mandalorians in ancient times. Seeing the darksaber in action, it’s clear that more than just its distinctive blade color stands out!

The appearance of Kylo Ren’s lightsaber in The Force Awakens teaser trailer immediately grabbed everyone’s attention. The crossguard style sparked passionate debates, and finally seeing it in action will be another exciting element of the new film. The fact that it already caused such a strong reaction from fans is part of why the crossguard lightsaber makes this list. It’s safe to say that it will not quickly be forgotten. Even before Ren’s lightsaber debuted, his style of blade appeared in the Expanded Universe. That lightsaber, used by a Jedi, only had two blades, but it was just as memorable a weapon in the Star Wars world.