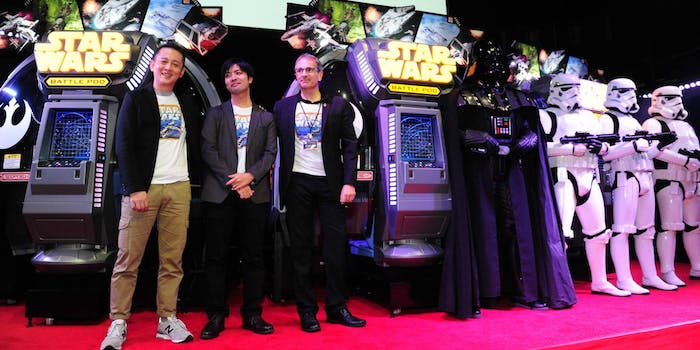 Get ready to take the pilot's seat.

If you’re one of the fortunate few who can even think about owning an arcade game at home, there’s a new contender for the top spot on your “must have” list.

Battle Pod looks like a clear homage and update to Star Wars Trilogy Arcade, a sit-down, on-rails shooter with a huge screen that loomed large in arcades when it was released in 1998. You can probably still find copies of the 16-year-old machine in arcades to this day.

The levels shown in Battle Pod so far also refer back, whether deliberately or not, to levels in the Trilogy Arcade game. The first Battle of the Death Star and the Battle of Hoth were on display during the Battle Pod hands-on reveal event in New York, along with a speeder bike level set on Endor.

A preview of Star Wars Battle Pod began Wednesday at the Dave & Buster’s restaurant and arcade at 234 W. 42nd St. in Manhattan, and will be available until Nov 2.