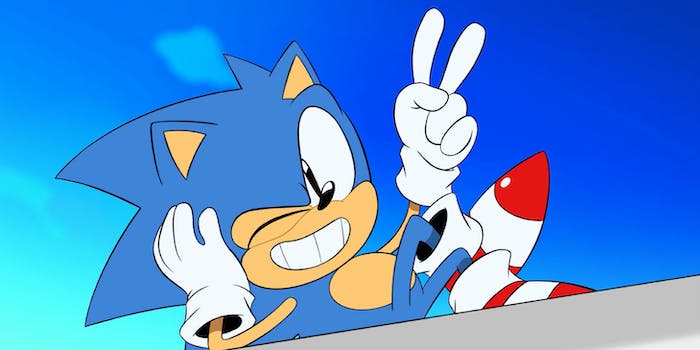 Whether it's bopping Robotnik in the brain or just lazing about on the beach, the new Sonic shorts are a feast for fans.

Even though its doors are permanently locked, windows shuttered, and the only remaining smells are that of the Pizza Hut Express next door, I’ll never forget scanning the row of Sonic the Hedgehog VHS tapes at my local video rental store. It’s been some time since the blue blur and I have had a moment together, but those memories of watching Sonic and pals beat up robots shaped like roosters and the nefarious Dr. Robotnik are forever ingrained in my adolescent mind.

Much to my surprise, the latest 2D game in the franchise, Sonic Mania, has not only reinvigorated interest in the classic games’ roots, its accompanying animated short series, Sonic Mania Adventures, harkens back to the original cartoon’s glory days.

Episode two of Sonic Mania Adventures released Monday, and with it comes a charming little plot about Sonic learning that he can rely on friends to help him put the beatdown to the evil Robotnik. The animation is gorgeous, done by the same studio that produced the original Sonic Mania trailer, and it really captures all the humor and character necessary to get its simple point across. Sonic bounces off of Robotnik’s giant mechanical digger and winks at Tails with that little cocky grin that never truly went out of style.

Even though the ’90s cartoons featured voice acting (including Family Matters’ Jaleel White), it’s storylines never strayed too far from typical kids show fare. Robotnik has some new scheme, Sonic saves the day, rinse and repeat. In the less grim Adventures of Sonic the Hedgehog, Robotnik would always cap things off with a pitiful cry of “I hate that hedgehog!” It was ridiculously simple and cheap at times, but that simplicity kept it lodged in the hearts and minds of young viewers.

Really, that’s all Sonic has ever needed. The chaos emeralds are convenient enough MacGuffins for the cast to chase after endlessly, but the series only lost its footing when it over-expanded the cast with characters teetering way too far on the edgy or cutesy side of the spectrum. What I’m trying to say is: Why does Cream the Rabbit need to exist in a world where Shadow the Hedgehog is also shooting rifles at dudes?

With video games getting increasingly complicated and bloated, I’m grateful for little nuggets of pure nostalgia and character like these. Let’s hope we see more of this side of Sonic and less of the overwrought human-smooching that nearly killed him in 2006.

Sonic Mania Adventures is slated to release five episodes in total. No word on when the next will be, but we can only imagine what trouble that little blue goof will get into next time.