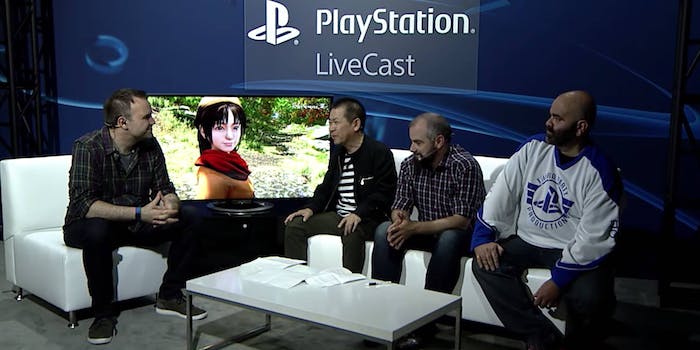 The fans have spoken—now so has Sony.

It looks like Shenmue III isn’t so independently funded after all.

With the plug, the Kickstarter hit its intensely modest goal of $2 million in less than a day, and it has gone on swell to more than $3 million and counting. While that’s certainly a success for a video game crowdfunding campaign, it’s no where close to what’s needed to pay for an open-world game like Shenmue III. The original Shenmue cost a whopping $47 million back in the late 1990s. How does that math work?

During PlayStation Live on Twitch and YouTube, Sid Shuman from the PlayStation Blog sat down with series creator Suzuki and Gio Corsi from Sony’s Third Party Productions team to talk about Shenmue III. When Shuman asked about PlayStation’s involvement with Shenmue III, Corsi responded saying:

“We met with Suzuki-san at GDC last year, and we started the long road to try and figure out how we were going to get this whole thing made. And we said the only way this is going to happen is if the fans speak up and we thought Kickstarter is the perfect place to do this. So, we set a goal for $2 million dollars and if the fans come in and back it, then absolutely we’re going to make this a reality. So, Sony and PlayStation is definitely a partner in this game, and it’s gonna be run through third-party production, we’re gonna help YS Net get the game done, we’re gonna be partners on it the whole way, and really excited to see this come out in a couple of years.”

So it seems Sony wasn’t just giving Suzuki stage time to make his pitch. The whole thing was a way for Sony to gauge interest and quite possibly prove to its board of directors and/or investors that Shenmue III is worth funding. And from Sony’s perspective, it doesn’t hurt that fans now have a financial stake in the game years before it comes to fruition. (Though, some observers already worry that the Kickstarter capitalized on fans’ excitement without providing much transparency about the game’s costs or how they’re being met.)

Shenmue was one of the first big-budget and uber-hyped games of its time. Released in Japan in 1999, it was one of the first games to have a full open world with a fully voiced story and fully voiced non-player characters. Shenmue 2 was meant to be the game to save Sega and its faltering Dreamcast. Sadly it wasn’t enough, and fans were left without the final piece to the Shenmue arc, until now.

YS Net and Sony expect Shenmue III to come out by the end of 2017 for both PS4 and PC.