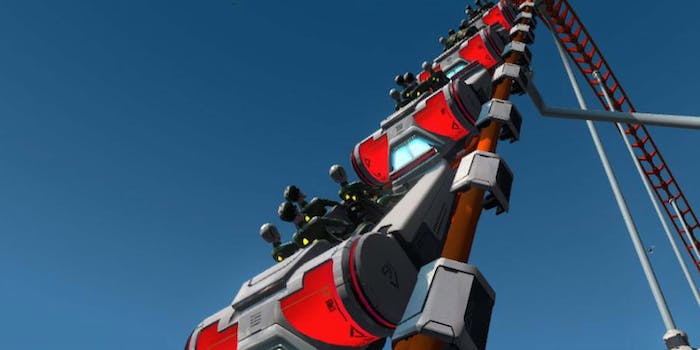 Screamride is a return to form for Frontier Developments, the studio that brought us the RollerCoaster Tycoon and Thrillville franchises.

While those games were ostensibly all about coaster construction, it was always in the context of amusement-park management. Sure, you were building extreme roller coasters, but you also had to worry about things like ticket prices and having enough bathrooms in your park.

Screamride ditches the entire amusement park conceit. Instead, players are introduced to Screamworks, a global research organization devoted to testing humanity’s capacity for excitement. It’s a thinly veiled excuse to make a game that focuses on roller coasters rather than resource management, but it also works perfectly to minimize any barriers between you and your next ride. The ridiculousness of it all also adds a tongue-in-cheek, almost cartoonish sensibility, giving Frontier Developments the freedom to experiment with introducing new play styles for its more extreme rides. 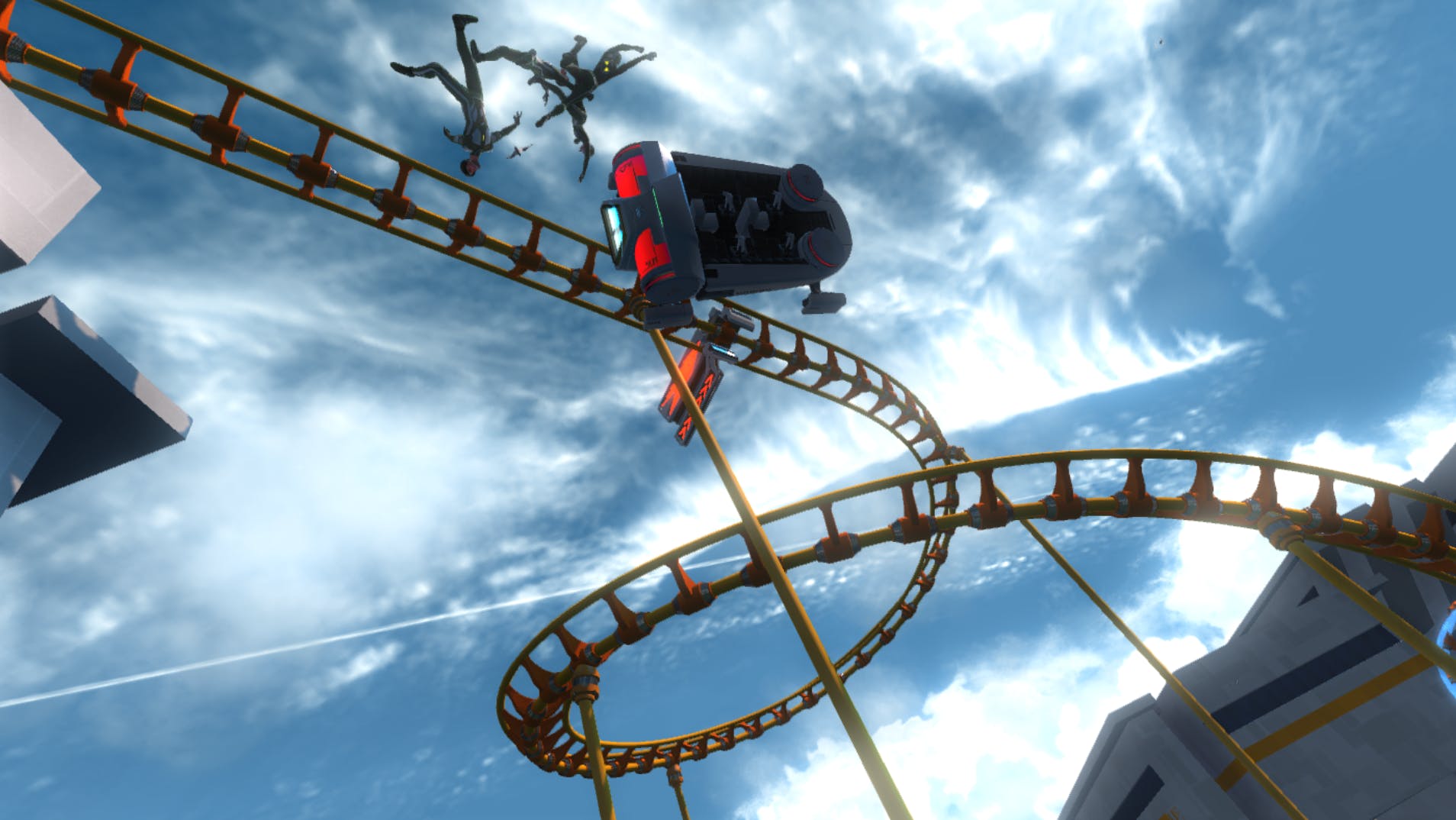 The campaign is split between three distinct play styles: screamrider, demolition, and engineer.

As the game’s namesake, screamrider is the most prominent mode and where you will actually get to ride the game’s twisting coasters. You aren’t just passively sitting along for the ride either. The game tests your reflexes to lean around turns, dodge obstacles on the track, and hit speed boosts all while trying to race to the finish without derailing your car. It can be a delicate balancing act to keep your car on the track.

Demolition, on the other hand, literally goes off the rails as you launch cars through the air in an Angry Birds-inspired attempt to cause as much destruction as possible. Demolition isn’t the most accessible mode thanks to ineffective and awkward camera angles for previewing each level, so it’s a mode that requires diligent practice to learn all of its ins and outs. That practice is rewarded though, as you’ll soon discover structural weak points and explosives that can set off satisfying chain reactions.

Finally, engineer levels will be the most familiar to fans of past roller coaster games, with each level offering a partially built ride for you to finish. Engineer levels take a much slower and deliberate pace than the other modes, acting more like a puzzle as you figure out the best way to piece the track together. At any point while building you can also test your creation. Statistics from the run that can help you tweak the ride to make it more exciting or identify where it builds too much speed causing it to derail. 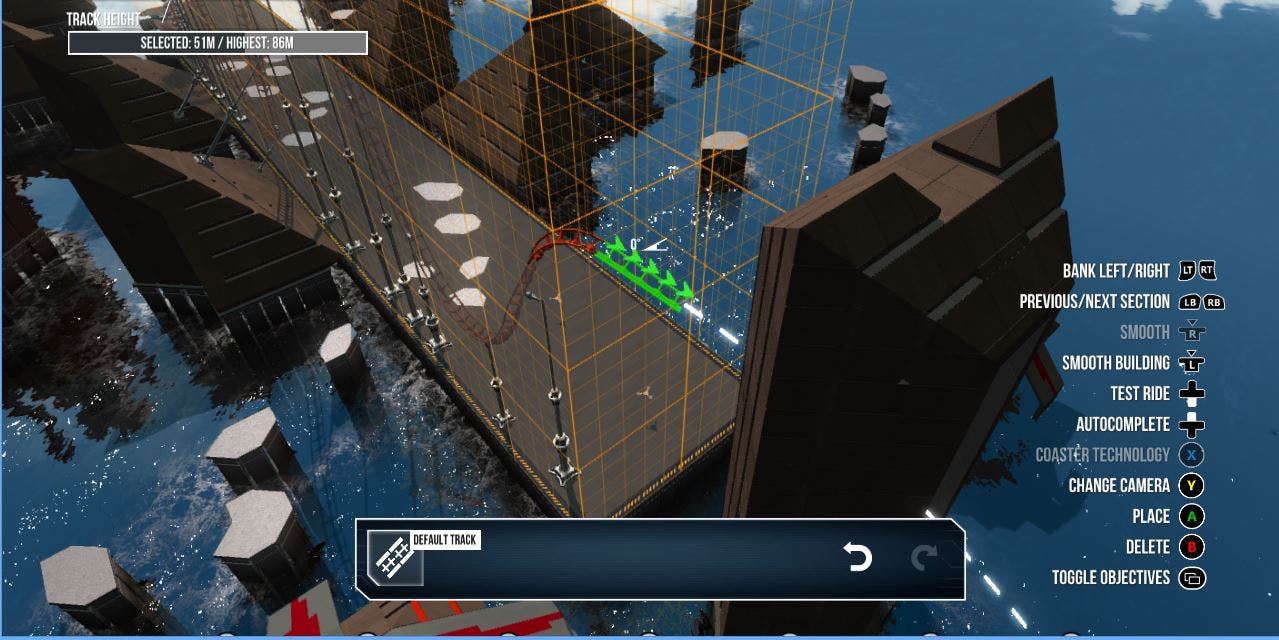 Each mode is packed with bonus objectives that encourage you to replay levels both to try new things and to improve your score for the online leaderboards. Bonus objectives also often have contradictory goals that can’t be completed in a single playthrough. The campaign steadily ramps up the difficulty, adding some new element every few levels so that there is always a new tool or obstacle to learn.

And yet, there is something about Screamride that feels hollow. While new obstacles and tools are introduced frequently, each is only prominent in a few levels and never really fully explored. While bonus challenges and online leaderboards encourage you to replay levels in new ways, the scoring system can often feel arbitrary and deflate that urge. While all three play styles are fun in their own way, they make for an odd mix that feels like it was smashed together from completely different games. The only thread of cohesion connecting the three modes is the separate sandbox mode, which gives you free rein to use your engineering skills and build new screamrider or demolition levels.

It almost feels like Screamride‘s three modes are really just an extended tutorial leading up to making your own levels in the sandbox or downloading the creations of other players through level sharing. It’s both a benefit and liability for the game, since the hollow experience at launch could easily be rectified several months later with an active sharing community.

Screamride is an odd case of a game where I enjoy it while I’m playing it, sinking hours at a time into mastering a screamrider track, finding the perfect pressure point to detonate a demolition level, or tweaking a roller coaster of my own creation for the best balance of speed and excitement. But the hooks aren’t fully there, and when I step away from playing I’m neither eager nor excited to return.

Disclosure: The copy of Screamride used for this review was provided by Microsoft.