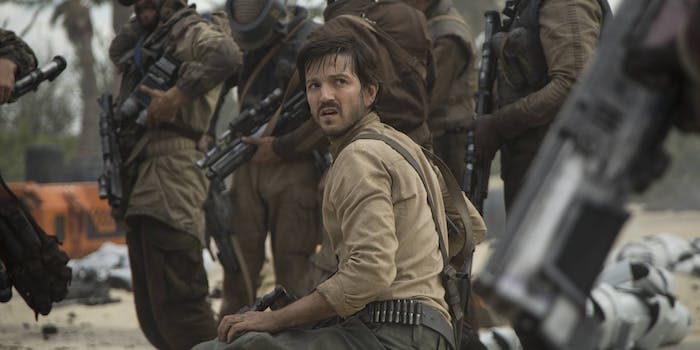 This story is the perfect illustration of why representation matters.

Rogue One just broke $800 million at the box office, proving that any hint of a Star Wars boycott was so much hot air. It’s yet more evidence that audiences will turn out for Hollywood movies with racially diverse casts—and those casting choices make a personal impact, too.

Diego Luna shared one such story on Twitter, posting a screencap from Tumblr user riveralwayknew. She wrote about the experience of watching Rogue One with her Mexican father, who was surprised and excited to hear Luna keep his Mexican accent for the film.

“I wanted my Mexican father, with his thick Mexican accent, to experience what it was like to see a hero in a blockbuster film, speak the way he does,” wrote riveralwaysknew.

“When the film was over and we were walking to the car, he turns to me and says, “did you notice that he had an accent?” And I said, “Yeah dad, just like yours.” Then my dad asked me if the film had made a lot of money. I told him it was the second highest grossing film of 2016 despite it only being out for 18 days in 2016 (since new year just came around). He then asked me if people liked the film, I told him that it had a huge following online and great reviews. He then asked me why Diego Luna hadn’t changed his accent and I told him that Diego has openly talked about keeping his accent and how proud he is of it. And my dad was silent for a while and then he said, “And he was a main character.” And I said, “He was.”

Several Rogue One actors have spoken about the importance of the film’s racially diverse cast, including Diego Luna discussing the impact of his accent in the context of the white British and American heroes of previous Star Wars movies.

As for riveralwaysknew’s dad, he will soon know that Diego Luna heard his story. Riveralwaysknew saw Luna tweeting about her Tumblr post, and is looking forward to passing the message on to her father.