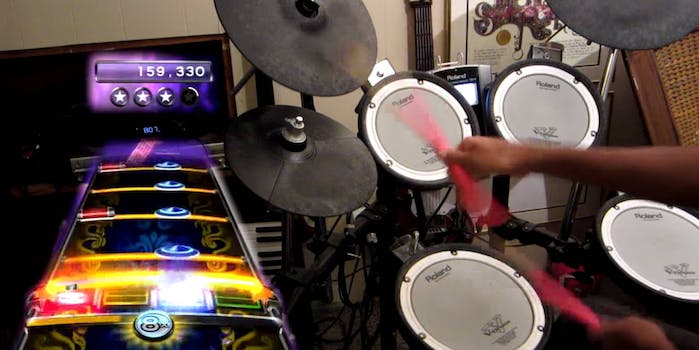 After a five year hiatus, Rock Band 4 was released earlier this month, but that doesn’t mean gamers are giving up on their old plastic drum kits.

Take the case of YouTuber KyleDaCrusher, who just finished playing “Through the Fire and Flames” by DragonForce on Pro Drum mode in Rock Band 3. He actually more than just finished: He played it flawlessly, landing a 100 percent completion. Yes, he hit all 4,751 consecutive notes without a single error. He may be the first person in the history of Rock Band to do so. At least his screen shows that he’s ranked No. 1 on the Rock Band leaderboard.

Unlike regular drums in Rock Band, Pro Drums adds hi-hat, crash, and ride cymbals. Players can purchase a Pro Cymbal kit or use an electronic drum set. As stated in our review for Rock Band 4, Harmonix decided to add a mode called Realistic Drums in which, as we pointed out, “you may as well switch over to the real deal because you’re practically doing it anyway.”

If you do plan to get in on some full-drum-kit action for Rock Band 4, you may have to wait a bit. Publisher and accessories manufacturer Mad Catz has just put the Triple Cymbal Expansion Kit up for pre-order. Sadly, it’s not compatible with previous Rock Band drum kits, so if you have an old kit, you will have to hunt for the last generation cymbal pack second-hand.