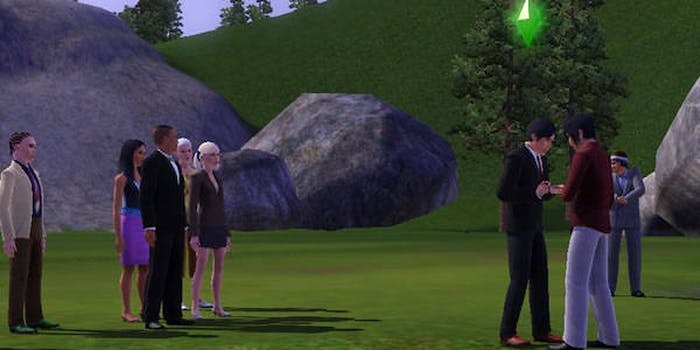 The Sims is a perfect example of why representation matters.

Last week, hailing the 15th anniversary of The Sims, a game that started out as something of a cultural joke but became one of the most iconic gaming franchises in history, the New Yorker wrote about “the kiss that changed video games.” That kiss, a vaunted same-sex kiss between two Sims characters during the game’s E3 preview, was a revolutionary moment for representation in gaming.

It also, as a recent Reddit discussion around the New Yorker article proves, gives us insight into why representation is important to begin with.

Not only can it represent members of the geek and gaming community who feel marginalized, but it can help queer gamers see themselves before they even realize what they’re seeing.

I was 14 year old closeted gay boy living in rural Kentucky when I played The Sims for the first time. It’s rare that a video game is a life-changing experience, but I’m not exaggerating when I say that it was. It was a safe place to experiment with social interactions that were absent from (if not illegal in) my real world. And it was a space free from the judgment, the ostracism, and the hate that was associated with homosexuality in my family and community.

Skyciril was another closeted man who used the game’s popularity itself as an example of acceptance:

It made me have some flashbacks to myself as an insecure youth struggling with internalized homophobia and attractions towards men. I remember seeing stuff like this and thinking being gay can’t be so bad if big companies are endorsing it.

This was part of a long road to acceptance of my sexuality. I’ve come a long way since then.

The idea of playable gay characters was radical for 1999, when The Sims debuted, but perhaps even more shocking is how radical it still is as a concept today. Unless a game is specifically built to facilitate dating, like The Sims or Japanese dating “sims,” characters with same-sex attraction traits are extremely rare. And it’s even rarer to have the playable character’s gay identity not be a part of the major focus of the game. Recently acclaimed games like Gone Home and The Last of Us have had characters whose queer sexuality was a major part of the plot, though Gone Home‘s playable character wasn’t queer. But in shooter games or action-based games, it’s rare to get a playable character who also just happens to be queer.

Redditor bearblu commented on the novelty, noting, “I appreciate companies who create an option to include Gays. Games like Dragon Age 1, 2, and Skyrim are the ones I’ve played. I’ll support these companies with my gay dollars.”

There are also encouraging half-steps towards representation, like Bioware’s gradual eventual expansion, in Mass Effect 3, to include two same-sex only romantic possibilities for the male and female versions of Commander Shepherd. But while a same-sex partnered relationship was a major groundbreaking moment for a blockbuster franchise like ME, we’re still struggling to get playable characters who have it all: queer sexuality and cool action, or fantasy adventures and meaningful queer romantic relationships.

In the meantime, we have The Sims. The inherent open sexuality of Sims characters is a standard fact of the game at this point. Since 2009, the game has even included what many real-life queer relationships can’t have: the ability for same-sex characters to get married.

While straight geeks and non-gamers may take all of this for granted, it seems that there are plenty of gay gamers who can’t—along with their supporters, like redditor druggeddwarf:

The sims, by itself, was strangely how my little cousins came to terms with homosexuality. It made coming out to the younger generation of my family a hell of a lot easier than the older gen. so as much as I shit talk EA, I have them to thank for that.

Screengrab via The Backlot