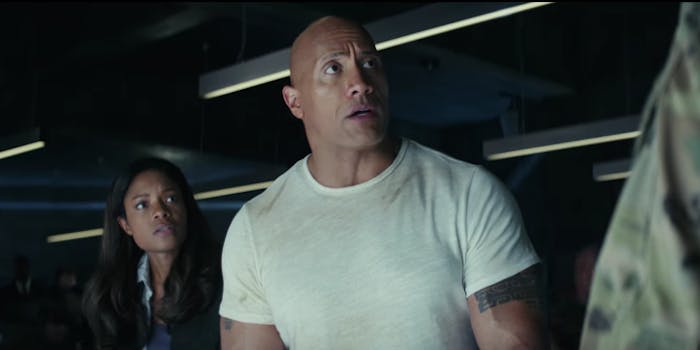 The power of the Rock.

If you’ve seen the trailer for Dwayne “The Rock” Johnson‘s new gorilla movie Rampage—the action film loosely based on Midway’s 1986 arcade game—you probably already know that it’s not exactly gunning to win Best Picture at the Oscars this year. But it might not bomb as badly as video-games-turned-into-movies usually do, either.

It seems like Johnson has learned a couple lessons after starring in the 2005 adaptation of first-person shooter Doom. For one, he’s the hero this time instead of the villain, which means that his charm and natural comedy get to counteract whatever the script may (or may not) be serving. And according to Rotten Tomatoes, its box office impact may be bigger than anyone was expecting.

The movie opens this weekend, and if it’s able to hold its current 53 percent fresh rating, it will become the highest-rated video game movie of all time.

Ever humble, he took the good news with a grain of salt. “Remember, I starred in the stinker Doom so I have lived thy curse,” he wrote.

For the record, Doom has a ghastly 19 percent Rotten Tomatoes score.