Rainbow Six Siege is tactical fun, but it won’t have lasting appeal

Different fans come to Rainbow Six for different reasons, and the best installments of the franchise are the ones rich in features that cater to those diverse tastes.

Siege isn’t one of those sequels. It’s focused on team-based adversarial multiplayer, catering to everyone who has at least a modicum of interest in multiplayer online battle arenas. It may not have the esports market as its primary target, but you can bet it was partly molded to be ready for primetime should Major League Gaming and other esports organizations decide to give Siege stadium real estate.

Those expecting character customization with depth and a fleshed out campaign with co-op will be out of luck. Siege’s version of terrorist hunt is a little too narrow in design. If these sacrifices were made to focus and hone this very specific 5v5 mode, it was mostly worth it. 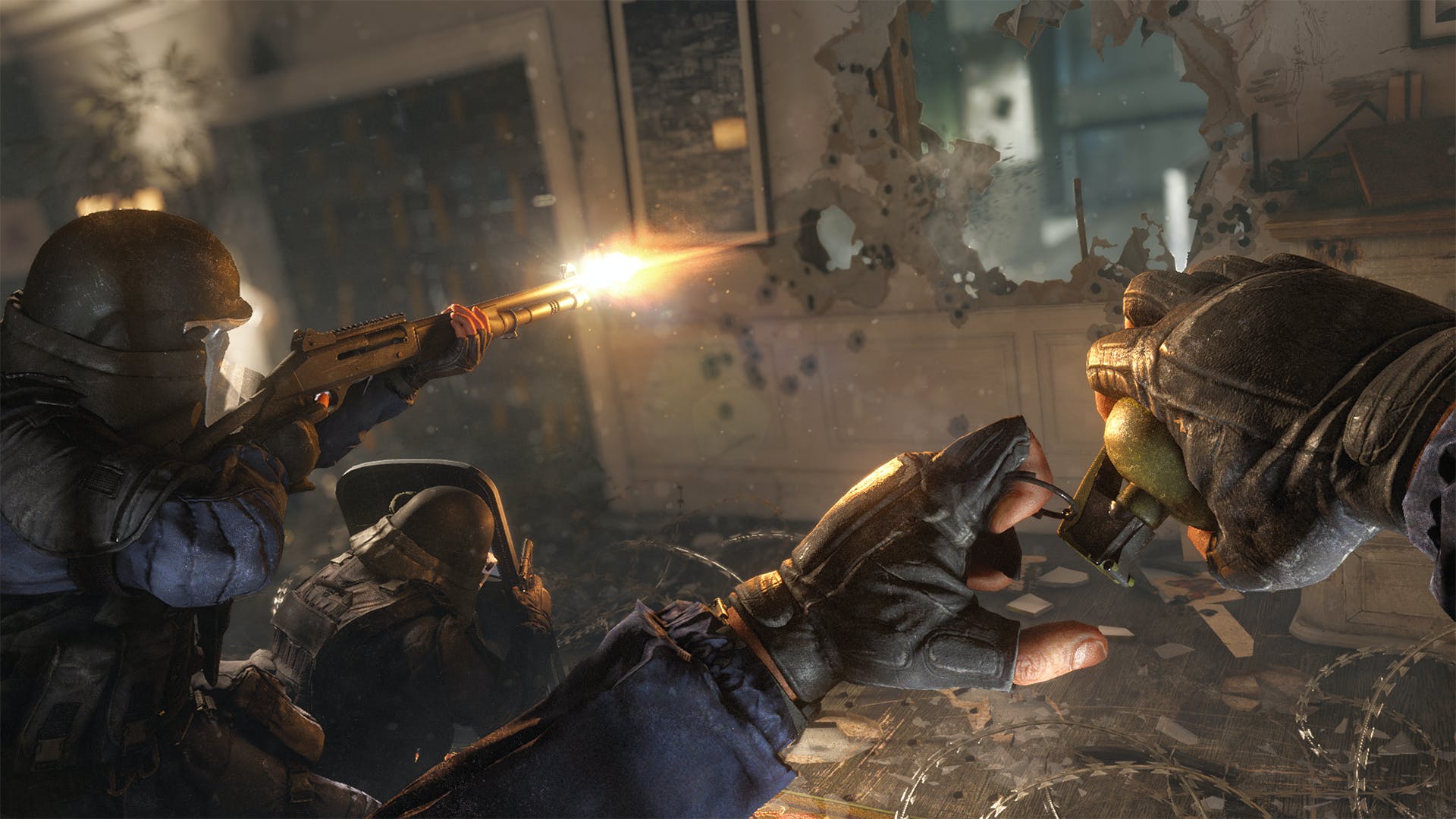 While Team Deathmatch hogs the spotlight in whatever shooter it ends up on (though it’s not present in Siege), there is a special kind of tension and stress worth experiencing in modes based on Last Man Standing. The latter greatly inspired Siege, pitting two teams of defenders and attackers against each other. Victory is a simple, straightforward case of the defenders repelling the attackers within the allotted time or the attackers completing their objective. Alternatively, you can just wipe out the opposing side, which actually happens more often than the other victory conditions.

The first phase of each round is a suspenseful pre-show before the real action begins. For the defenders, it’s a game within the game, where they have to guess where the other team will most likely infiltrate the map and fortify the space accordingly. There’s an almost tangible, tactile appeal in placing large metal reinforcements on walls and floors and securing them with the turn of a crank. Add to that the glee and anticipation of setting traps and barbed wire to slow down your enemies.

If you’ve played other recent Tom Clancy games like Ghost Recon Future Soldier and Splinter Cell: Blacklist, then you already have a headstart in Siege’s infiltration process when you’re on the attacking side. That starts with the use of drones to access the map to help better plan your approach. It’s not just about outlasting the defenders. Specific objectives like bomb defusal, securing chemical weapons, and hostage rescue are other factors you need to consider. Because of the franchise’s rich history in infiltration, it shouldn’t be surprising that every match features at least one point of weakness. Defenders have a finite amount of blockade gear, and it’s up to the attackers to survey the area, find the weakness, and figure out how to best exploit it. Despite this opening, it’s a huge credit to developer Ubisoft Montreal for honing Siege’s balancing. In the 50-plus matches I played, seldom did I ever suspect that it was easier to play on one side over another. 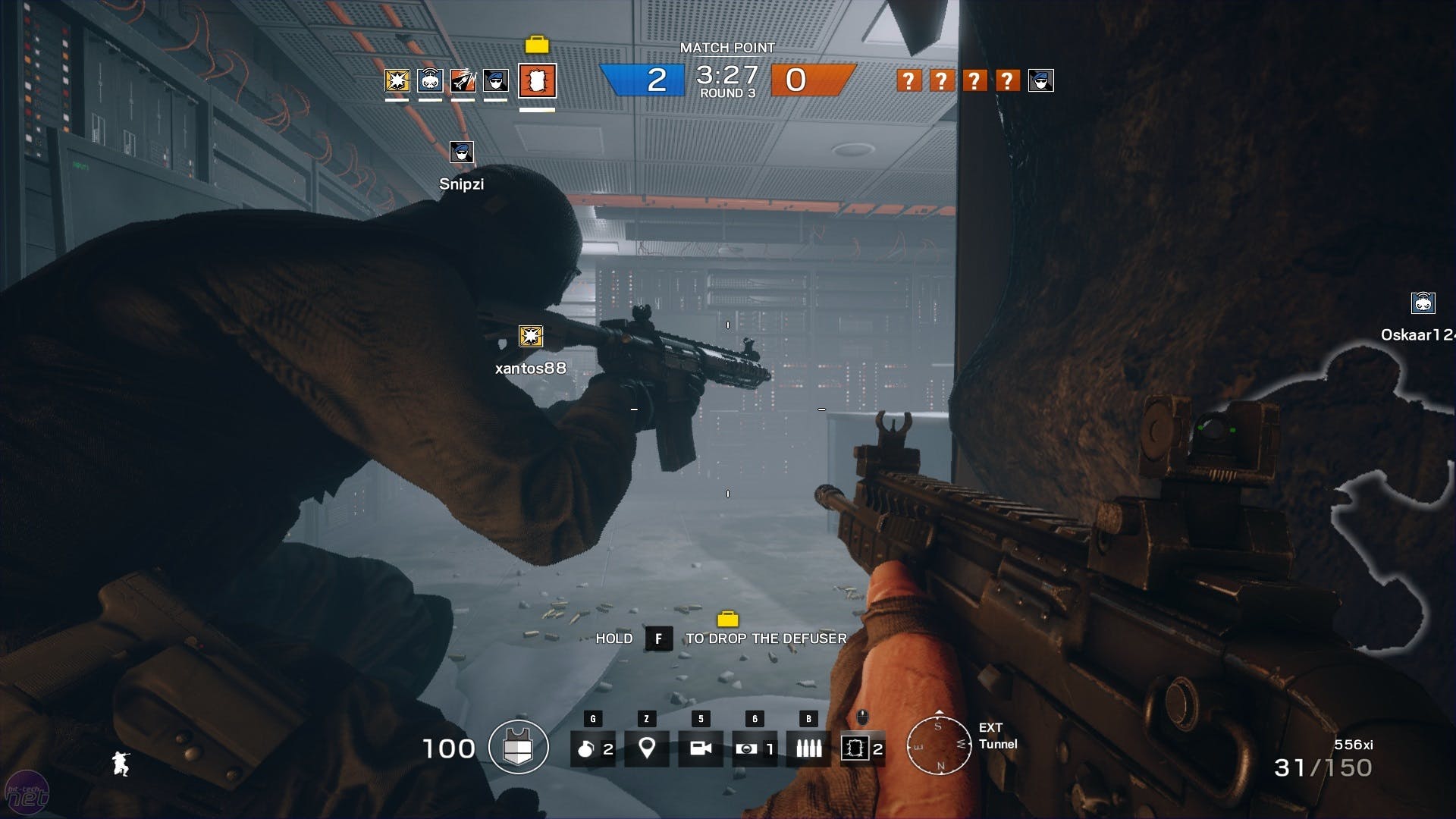 This form of play plus the natural unpredictability of online multiplayer is all the more enhanced by the variety of Siege’s roster of operators. You won’t find familiar Tom Clancy factions like Third Echelon or Voron, but rather real-world groups of operatives like Spetsnaz and the SAS, all of whom have their own specialities. It would behoove any team to diversify their fivesome with a mix of abilities, and it is often rewarding to coordinate this among teammates before the start of a match. It’s an affirming sign that everyone is taking the mission seriously. On offense, Blitz provides shields to help cushion the blow from entering a fortified room. Sledge adds blunt destruction in the form of—you guessed it—a sledgehammer. Equally destructive is Thermite, which provides an exothermic breach to break through strengthened walls. On defense, you can use Kapkan to add more traps than the standard allotment, which would complement an operator specialized with Smoke, who can release poisonous gas. And to help take out some of the mystery of unseen attackers, Pulse can use heartbeat sensor to spot nearby foes.

The emotional rushes come from the perpetual shifting from acting to reacting and vice versa. On both sides, it’s a case of adapting to the current situation, making the most of your weapons, gear, and abilities and the assets of your nearby squad mates. Your success is all the more amplified if you manage to commit all 10 maps to memory, all of which have been carefully crafted by Ubisoft Montreal. As easy it is to get into Siege with basic first-person shooter experience alone, excelling in this game takes a great deal of thought, planning, and keeping a cool head. Coming into each match with those attributes will result in some gratifying outcomes, win or lose. 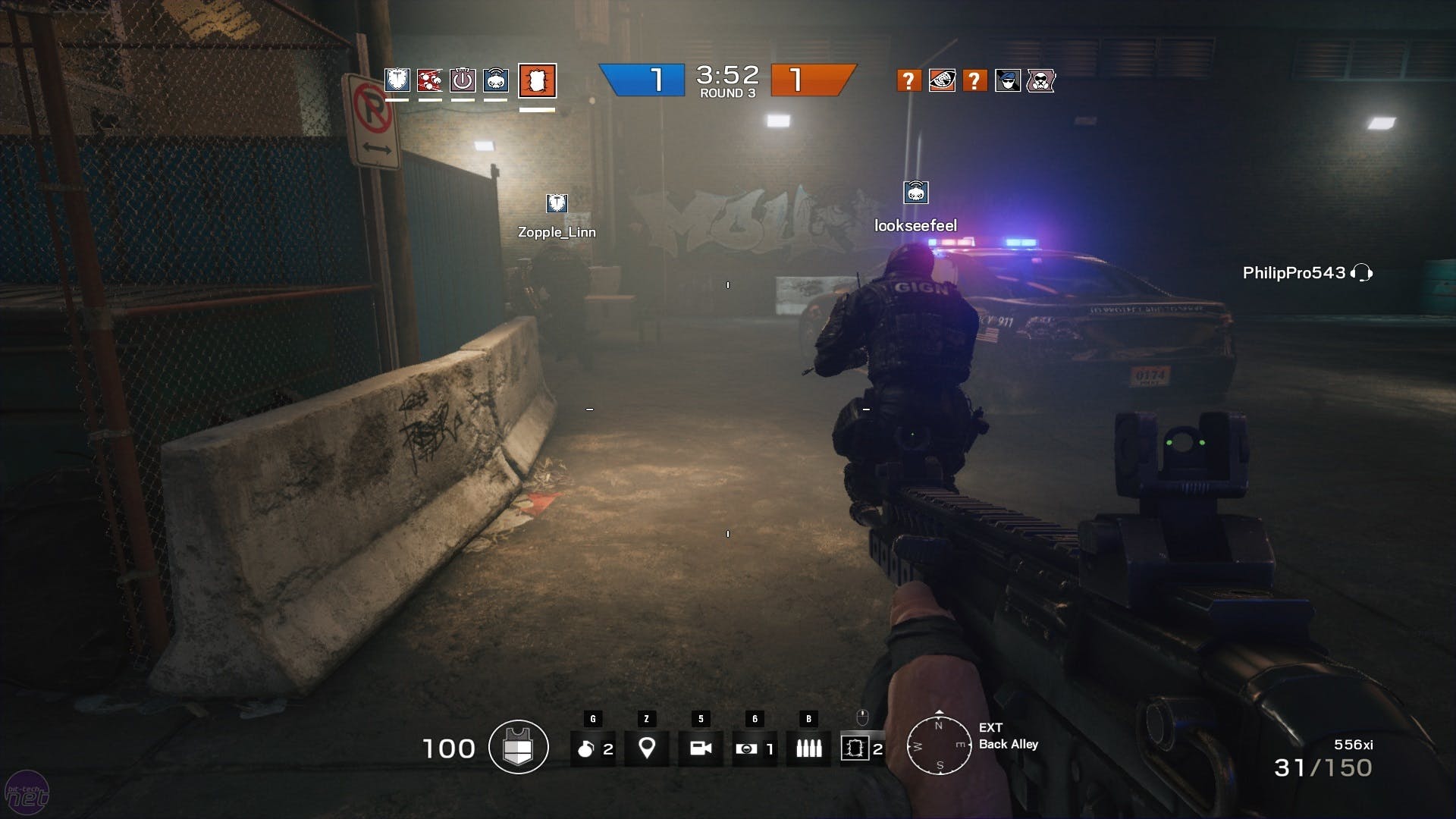 It’s a risky proposition to rely on a Last Man Standing-inspired mode as the main selling point for a $60 game, especially for a mode that doesn’t have respawns. So it was a pleasant surprise to learn that fallen comrades are of immense value even when they’re not in the field. Instead of passively killing time in spectator mode, anyone killed can use the drone or security cameras (depending on which side you’re on) to give surviving teammates a heads up on enemy locations and even mark their positions. So while dying does not afford you a momentary reprieve to run to the fridge for a soda, at least you have the satisfaction of being a valued team member even if you’re always the first to die.

Speaking of being a moving target, one notable issue that holds Siege back from excellence is its less than ideal hit detection. There is an odd and often frustrating discrepancy between the amount of successful hits you think you got versus what the replays claim you got. Assuming Ubisoft has big competitive gaming plans for Siege, this issue needs to be at the top of the fixes list for the next patch. 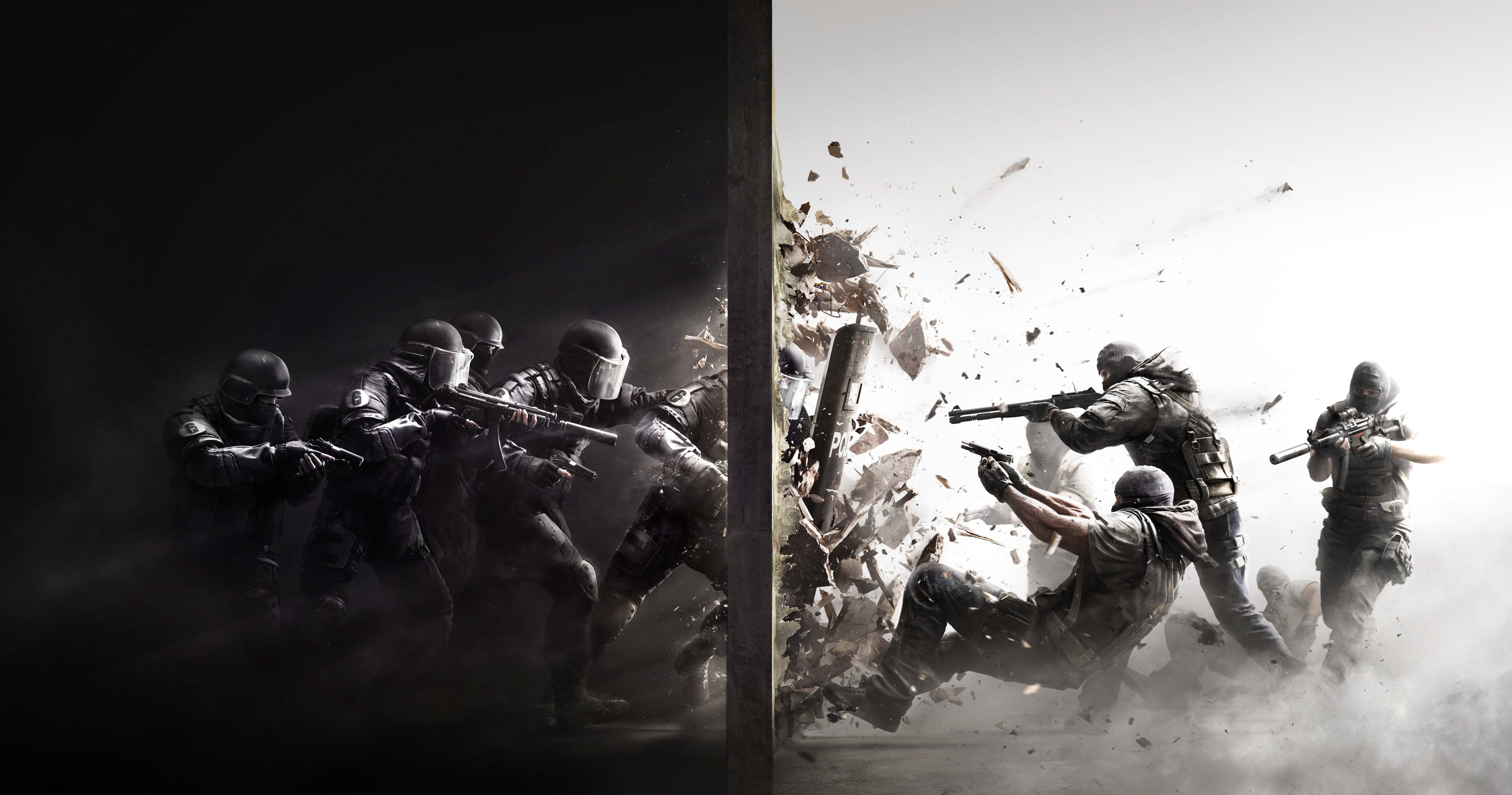 The strong emphasis on cooperative play makes playing with headsets a necessity. Having even one person without a headset puts that squad at a significant disadvantage against a fully equipped team. It’s immensely rewarding when matches are won thanks to lines of communication that are active, clear, and calm. The game does provide visual cues for downed teammates and notable threats, but these markers are poor substitutes for verbal updates. The disappointing lack of a clan framework only makes the dependence on communication all the more crucial. Without the means to customize team names, colors, logos, or any other amenities that provide teams a sense of identity, Siege, at least in its out-of-the-box form, isn’t truly ready for the eSports stage.

While I wasn’t expecting Rainbow Six Siege to reach the heights and quality standards of the two Vegas installments in the series, Siege feels like a lost opportunity to make a Tom Clancy brand relevant in the competitive gaming space. The game’s multiplayer foundation is undoubtedly solid, but it lacks supporting elements that would compel esports enthusiasts, let alone Rainbow Six fans, from investing time in Siege many months from now. Whatever time you do manage to spend, there are rewards to be found through tactical planning and execution that you can’t find in any other shooter.

Disclosure: Our review copy of Rainbow Six Siege for PlayStation 4 was provided courtesy of Ubisoft.