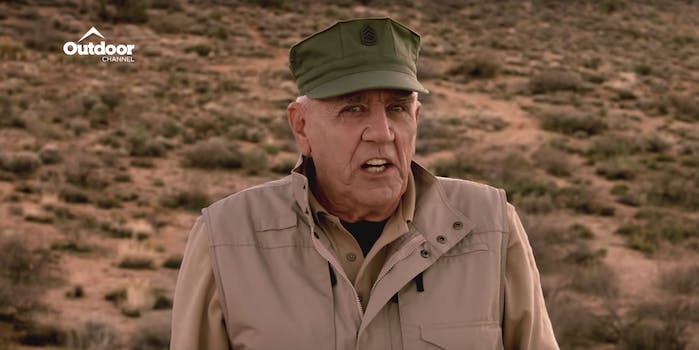 For as long as there have been games and movies about military boot camps, there’s been one voice barking with a fury and wit no one else could match.

R. Lee Ermey, famous for his film role as the brutal drill instructor “Sgt. Gunny” in Stanley Kubrick’s Full Metal Jacket, died Sunday at a hospital in Santa Monica, California, from complications stemming from pneumonia, according to his manager. He was 74.

Though Ermey’s film roles will undoubtedly remain his most respected achievement, the former marine who struck fear in the hearts of fresh recruits everywhere (and laughter in those who could enjoy from the sidelines) also lives on in various video games.

In honor of Ermey, we revisit the games that made him just as loved for his voice acting as his live-action roles.

Never let it be said that R. Lee Ermey wasn’t up for breaking some new acting ground, especially in this ridiculous FMV game about an apartment full of booby traps, Italian mobsters, and a bunch of secret society fanatics. As an unnamed observer, the player must use the apartment’s many cameras to deter threats to the tenants by activating various traps, each more absurd and elaborate than the last. Ermey played the unusually soft-spoken role of Lyle the handyman, who kept the apartment’s traps (and plumbing, we assume) in operating order. After the player learns their initial ally Eddie (played by the late Corey Haim) actually intends to harm or kill the other tenants, Ermey’s character reveals he’s Eddie’s father. He aids the player by showing them a number of traps that Eddie never knew about, allowing the player a chance to catch Eddie for good. Besides the traps, Ermey’s character even takes some time to reconnect with his wife in a touching, if ultimately cheesy bit of romance. If you’re wondering whether or not Ermey ever gives into his more aggressive side, fear not. Failing at any point in the game results in Ermey’s character tearing you a new one right before flipping a switch that presumably cuts you off for good.

An altogether tragic figure, General Simon Barnaky (whose voice by Ermey can be heard in various journal entries) was once a strong and proud military leader. The technology-loving Brotherhood of Steel toyed with the idea of allowing mutated lifeforms into their ranks, but Barnaky’s deep-running disdain for them led to infighting. After being kidnapped by a mutant army and then a robot uprising in the midwest, Barnaky is tragically lobotomized, his brain stuffed into a cyborg body so he can lead the robot army in its destructive quest. By the game’s climax, the player is able to either defeat Barnaky’s cyborg form or remind him of the promise he made to his late wife to build a safer world for their family, quelling the cyborg’s aggression. Ermey received plenty of chances to bark orders and mission details, but he was also afforded the chance to deliver some more poetic lines about war’s futile march forward, stating, “You cannot stop the future, just as you can’t stop falling rain from reaching the ground.”

This was definitely one of Ermey’s more one-note roles. Wa-Wa, the elemental spirit of water, gave Crunch Bandicoot (the “metal Sonic” equivalent to Crash Bandicoot) the ability to control water, ice balls, and energy waves. Should Crash fail, he’s subjected to some classic Ermey one-liners, like “They’re going to have to hang you out to dry when I’m done with you.”

If you weren’t already salty enough getting capped by teenagers with sniper rifles painted with weed leaves, how about some good ol’ Sgt. Gunny lines to finish you off?

Though not voiced by Ermey, the Mr. Gutsy-class war robot Sergeant RL-3 (a “leetspeak” way of spelling out Ermey) is a clear homage to the gruff Sgt. Gunny of Full Metal Jacket, with lines like “There’s nothing I like better than making some other poor bastard die for his country.” The good Sergeant can be acquired as a companion, wherein he’ll blast every last enemy lifeform with a combination of molten fire and plasma. Hooah.