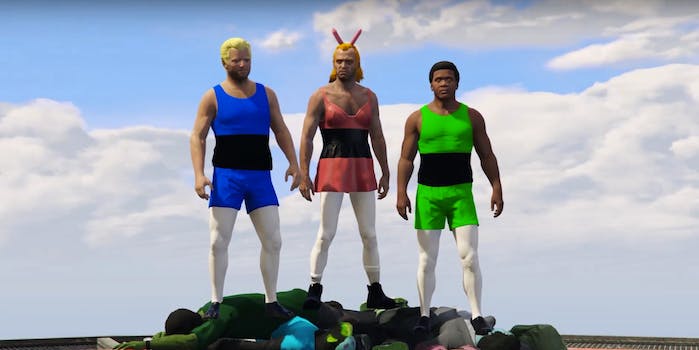 This new version of the Cartoon Network show intro will make you see the heroes in a whole new light!

From The A-Team to The Golden Girls, YouTube user Merfish has recreated some of the most classic TV opening sequences in the video game Grand Theft Auto V. Now Merfish is starting 2016 with another amazing Grand Theft Auto mashup by tackling the beginning of the classic Cartoon Network show The Powerpuff Girls.

Merfish’s latest video brought sugar, spice, everything nice, and chemical X to GTA V by remaking the opening for the cartoon. The characters may look a bit (a lot) different from their actual show counterparts, but it’s great seeing Buttercup, Blossom, and Bubbles fighting evil even in this form!

In case you’ve forgotten what the original introduction to the show was like, Merfish also shared a video comparing his remake side-by-side with the original.

Cartoon Network will most likely be creating a new version of the opening for the reboot series. As Merfish has proved, the possibilities are endless.