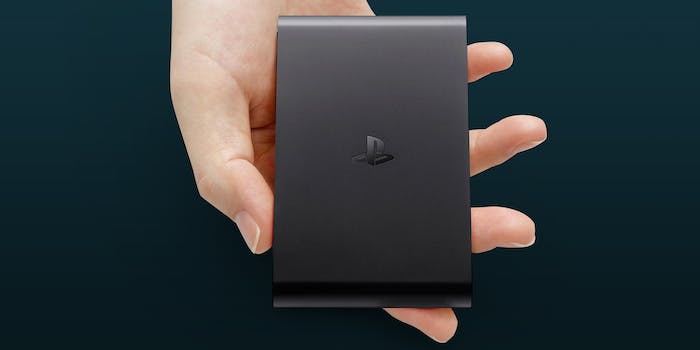 Do you really need a PlayStation TV?

Don’t let the name fool you: The PlayStation TV has very little to do with television.

Don’t let the name fool you: The PlayStation TV has very little to do with television. It’s really a micro console, not a set-top box, and it could be a must-have for longtime fans of the company.

Playstation TV (PS TV) will be released in North America Oct. 14, for $99.99, the company announced Tuesday. The device is designed to appeal to anyone who wants to dive deep into the sizeable library of legacy games for the brand. Sony has released the full list of launch day games for the PS TV. It’s dominated by games from the original PlayStation, games for the PlayStation Portable handheld (or PSP), and PlayStation minis, which were small games developed mostly for the PSP.

In a sense, PS TV is also a workaround for consumers who don’t own a PlayStation Vita, which hasn’t sold very well. Sony is trying to create a new pipeline for Vita games to reach the consumer, and PlayStation TV owners will be able to purchase their Vita games digitally or use the physical Vita games they can currently purchase at retail.

At some point, Sony’s PlayStation Now streaming service, which is currently in open beta on the PlayStation 4, will also be supported by PS TV, which means the new micro console could someday support PlayStation 3 games. PlayStation TV will also allow you to stream gameplay from your PlayStation 4 to another HDTV in the house, and it will enable users to buy, rent, and stream media like music, television shows, and movies via the PlayStation Store.

The main attraction to PS TV, however, is its ability to play original PlayStation games without either owning the original hardware, or owning and worrying about backwards-compatibility issues with the PlayStation 2. That’s flat-out awesome.

The original PlayStation was released in 1994, and it arguably marked a sea change in the industry. Resident Evil, Metal Gear Solid, Silent Hill, and Medal of Honor are among the influential franchises that made their first appearances on the first PlayStation. (The PS1 versions of those games were playable on the backwards-compatible PlayStation 2, but not on the PS3 or PS4.)

The addition of PS Vita handheld games, which tend to have great visuals, is a nice bonus. Some PS Vita games make use of both the front and rear touchpads on the Vita device itself, however, which ought to limit whether or not the full library of PS Vita games will ever work on PlayStation TV.

If someone isn’t interested in either legacy PlayStation games, or games for the PS Vita, the value of PlayStation TV is dubious. The ability to stream games from the PS4 to a different television is a potentially cool feature for anyone who doesn’t want to unhook their PS4 from television A and hook it up to television B, and vice versa, every time they want to switch rooms. But is that convenience really worth $99?

If and when it’s announced that the PlayStation TV can stream legacy games back to the PS4, such that one has the best of both worlds on either end of the connection, that would probably make the purchase more attractive to a wider set of consumers.