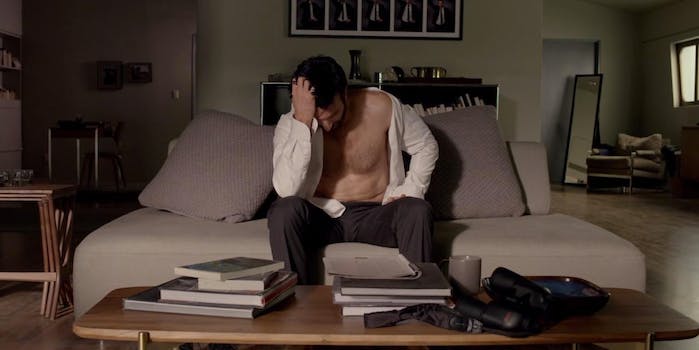 It’s only been six weeks since Playstation announced plans for its first foray into the game of original online programming. The gritty adult superhero series Powers debuted on its Playstation Plus network today with hardly any buzz at all.

But then, when you have a show featuring a legendary co-creator like Brian Michael Bendis, a strong ensemble cast including Eddie Izzard, and the production studio responsible for Breaking Bad, you can afford to let the show speak for itself.

Playstation and studio Sony Pictures are also making the first episode of the show available to fans for free on YouTube, and the ploy seems to be paying off. The series has gotten positive reviews thus far, and fan interest seems to be encouraging.

Powers follows a detective, Christian Walker, (Sharlto Copley) who’s lost his superpowers in a world where powers are another way of giving more, er, power and privilege to an already callous, class-focused elite. In the first episode, we see him grappling with the loss of his superpowers and the elite prestige that went with them. Along the way there’s plenty of Watchmen-style violence and jaded cynicism.

First created as a graphic novel in 2000 by Bendis and Michael Avon Oeming, Powers is a hybrid superhero deconstruction and procedural. It argues that the existence of a class of petty, selfish humans with god-like powers would only serve to exacerbate social injustices rather than heal them.

As a premise, this is clearly the kind of show we all wanted Gotham and Constantine to be. But as disappointing as each of those series have turned out, Powers could fall into a similar trap by relying too much on gritty concept and not enough on actual plot innovation. One criticism already is that it “looks cheap and small” and is trying too hard to beat the audience over the head with the ins and outs of superhero plot tropes—even though anyone watching this show on Playstation Plus probably already knows their Rorshachs from their Riddlers.

New episodes will appear every Tuesday. To watch, you need to create a Playstation account and sign up for Playstation Plus, which starts at $9.99/month. You can also purchase individual episodes.

“Powers,” an edgy dramatic series from Sony Pictures Television and inspired by the graphic novel series of the same name, follows the lives of two homicide detectives, Christian Walker (Copley) and Deena Pilgrim (Heyward), who are assigned to investigate cases involving people with extraordinary abilities, referred to as “Powers.” Set amidst today’s paparazzi culture, Powers asks the questions, what if the world was full of superheroes who aren’t actually heroic at all? What if all that power was just one more excuse for mischief, mayhem, murder, and endorsement deals? Enter the men and women of the Powers Division, the only people brave enough to go up against the overpaid, commercialized, superhumans who glide through the sky imposing their power over the crowds below who both worship and fear them.