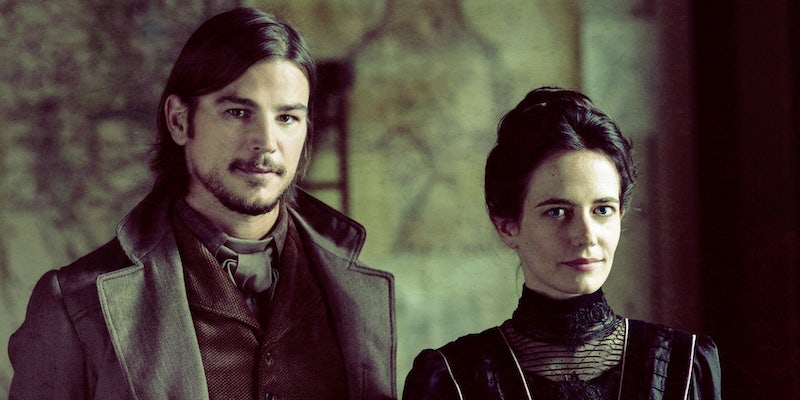 The season premiere of ‘Penny Dreadful’ is on YouTube right now

The new villain is a middle-aged witch mom who bathes in human blood. This show is a gift.

Showtime has helpfully posted the the upcoming season premiere of Penny Dreadful on YouTube, which is excellent news for fans of naked demon fetus women, sad werewolf Josh Hartnett, and literal bloodbaths.

Penny Dreadful is what The League of Extraordinary Gentlemen movie would have been if it were actually good: a gothic melodrama populated by characters from Dracula, Frankenstein, and The Picture of Dorian Gray, with the kind of cast that would sell out a West End theater run within seconds.

Newcomers will find it easy enough to pick up from the new season premiere, although we suspect Showtime’s YouTube gambit is aimed at a different audience: People who pirated season one, but might be tempted into buying a Showtime subscription this time round. Either way we’d recommend starting at the beginning, so it’s just as well that the first two episodes of the first season are on YouTube as well.

The first season achieved the difficult feat of making adult-rated horror look classy instead of gratuitous, with only a couple of problems. There weren’t enough female characters (although admittedly Eva Green is worth 10 men), and the only non-white character might as well have been written in the Victorian era: Sembene the taciturn manservant, who received no character development whatsoever.

Luckily, the second season seems to be tackling both of these issues straight out of the gate. Sembene got more screentime, and Madame Kali (Helen McCrory) has gone from a background role as a hokey Victorian spiritualist to being a Satan-worshiping villain with a posse of creepy naked witch daughters.

McCrory just finished an acclaimed turn as Medea at London’s National Theatre, so she was evidently primed for more blood-spattered maternal hijinks. This episode gives her the best introduction possible, a long tracking shot through darkened corridors, culminating in the revelation that she is taking a leisurely bath in a tub full of human blood. (Her house is, of course, decorated with human skeletons. Go big or go home, Penny Dreadful.)

This show would probably be laugh-out-loud terrible if it didn’t have such a high-quality cast. Vanessa Ives (Eva Green) can’t even go for a stroll in the park without collapsing in a Satan-induced swoon, while Frankenstein and his Creature regularly gift us with snappy one-liners like, “We are bound on a wheel of pain, thee and me.” (“It’s good to have someone to talk to,” remarks Frankenstein later in the episode, fondling Billie Piper’s nude corpse in his attic laboratory. Thank god for the gravitas of British theater training.)

If you were able to accept Penny Dreadful on these terms last season, then the new episode is precisely what you’re looking for. It’s still as grotesque, gothic and moody as ever—although if you want to see the uncensored version, you’ll have to fork out for Showtime instead of watching it on YouTube.