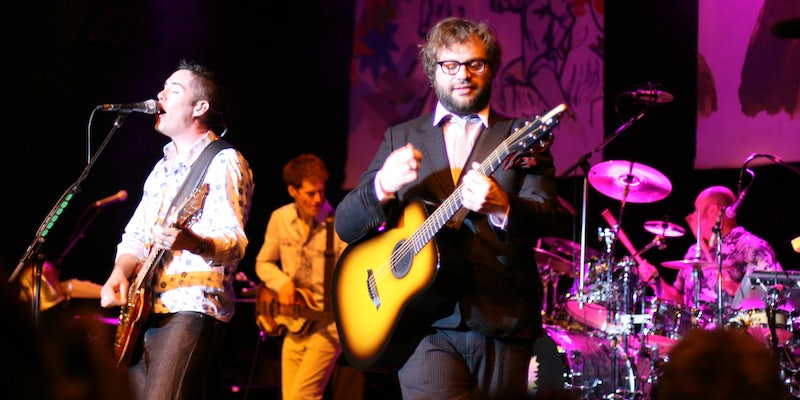 Is that one Barenaked Ladies song actually about a horrible murder?

Insane fan theory maintains 'One Week' is about a gruesome murder.

If you’re a fan of enduring Canadian pop outfit Barenaked Ladies then you know that the band likes to drop lots of mystery into its lyrics. The 1998 hit “One Week” alone is full of references to everything from Japanese film to vintage jazz composer Bert Kaempfert to a Toronto soccer stadium—all without any apparent connection.

But according to one fan who’s come up with an intriguing-but-creepy theory, there is a connection: The lyrics to “One Week” aren’t just a mystery, but a whodunnit.

Redditor Euchrid_Eucrow brought his idea to r/FanTheories, the popular subreddit for, well, fan theories—ideas about what was really going on in that thing you liked. Normally FanTheories is home to random “what if?” questions, or fan discussions that refuse to die. It’s rare that elaborate theories turn up there, but this one made the community sit up and take note.

You might be thinking, isn’t “One Week” about lovers laughing at themselves as they go through the familiar motions of fighting in a comfortable long-term relationship? But Euchrid_Eucrow sees it differently. “The Barenaked Ladies song ‘One Week’ is about a man who murdered his partner,” he begins.

I propose that, although the band has stated that the song is more or less about nothing, that it is in fact about a man who murdered his girlfriend in a fit of rage three days ago, and is now sitting in the living room with her corpse, slowly losing his mind as he forgets to eat and formulates a story to tell the police.

This seems like an unlikely, slightly chilling possibility given the bizarre stream-of-consciousness nature of some of the lyrics. But Euchrid_Eucrow proceeds to analyse the entire song to prove that it’s actually about a man struggling to maintain his sanity while grappling with a hideous crime:

“The couple was having an argument seven days ago,” he theorizes. “Five days ago, they decided to take a break and he moved out, perhaps to stay on a friend’s couch. He can come back when he gets his shit together. “

Three days since the living room
I realized it’s all my fault, but couldn’t tell you

Three days ago he came back and another argument ensued. This time he couldn’t control himself and lashed out with a golf club. He didn’t intend to kill her, but she died and got blood on his shirt.

The redditor believes the song’s famous reference-filled rap verses are a depiction of the murderer’s state of mind as he “sinks into hunger and panic-induced delirium.” Sure, the stream-of-consciousness quality of those lines give support to his theory, but it’s this line that Euchrid says really gets him—and we can’t blame him:

I’m the kind of guy who laughs at a funeral
Can’t understand what I mean?
Well, you soon will

I’m glad I’m not the only one who’s always thought that line was creepy. Euchrid’s theory holds that it’s the murderer addressing his partner’s corpse as he anticipates her funeral.

The theory argues that the song’s repeated references to the singer “losing” his shirt are precisely what you’d expect if the shirt was stained with blood. And in the middle of an otherwise incoherent rap verse, the surprisingly cogent sentence about getting a new set of golf clubs is perfectly in keeping with the thoughts of someone who’s just used one as a murder weapon.

OK admit it, you’re starting to get at least a little creeped out, right?

Euchrid_Eucrow believes the end of the song represents the character coming to terms with the enormity of what he’s done and preparing to turn himself in. But many of the enthralled redditors who responded to the theory added in even more details, pointing out that the rap verses in particular seem to reference the singer’s behavior after the crime.

“Watchin’ X-Files with no lights on” could be a reference to his turning all the lights off due to his fear of attracting attention. “Like Harrison Ford I’m getting frantic” could be a reference to The Fugitive, i.e. someone who’s on the run from the law, along with the actual Ford movie Frantic, which also features a man involved in his wife’s disappearance.

Even the hokey line “Chickety-China, the Chinese chicken / you have a drumstick and your brain stops tickin'” suddenly gains new meaning if we consider that the murder weapon is a golf club: As he thinks about his hunger, in his delirium he swings from thinking about a regular drumstick to the act of drumming the life out of the victim with the club. Perhaps the reference to Kurosawa’s “mad” samurai films is a reference to the use of the golf club as a sword?

And the song’s famously incomprehensible line “Birchmount Stadium, home of the Robbie?” That’s where he plans to bury the body, of course.

We echo this thread comment: “Damn, I’ll never be able to hear this song again without thinking of a murder scene.”

Although, given how deceptively dark most of Barenaked Ladies’ songs are, the odds are that was always a longshot no matter how chipper the music itself is. For its part, the band did not respond to request for comment.

We just hope Euchrid_Eucrow doesn’t turn this cynical fan theory superpower onto other happy, nostalgic ’90s songs. It’s a short step to interrogating Hootie and the Blowfish and pouring through the lyrics of “MMMbop” for clues.

That would really be a horror story.