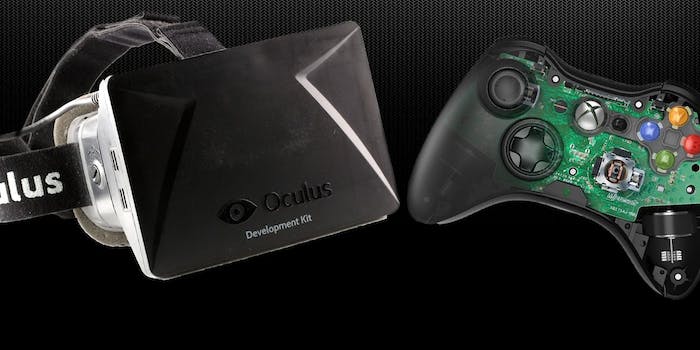 Carbon Design Group could help Oculus VR design a controller that takes virtual-reality gaming to the next level.

On Tuesday, Oculus VR announced it would be acquiring Carbon Design Group for an unspecified amount, a move that will help the company refine its controllers.

Carbon designed the controller for the Xbox 360, which is one of the best video game console controllers ever made. It may only be surpassed—and the jury is still out on this—by the follow-up controller to the Xbox One, which refines the Xbox 360 model.

One of the biggest challenges in implementing virtual reality (VR) gaming is figuring out what the best input device is for VR hardware. Without the answer to that question, VR gaming is dead in the water. Maybe Oculus, which was acquired for $2 billion by Facebook in March, finally has what it needs to solve the problem.

The current VR gaming craze was kicked off by Palmer Lucky, creator of the Oculus Rift VR headset, with a Kickstarter that was funded in September 2012. Sony has since jumped into the VR fray with its Project Morpheus rig, which was revealed at the 2014 Game Developers Conference and shown this year at E3. Valve Software is also on board with a VR headset.

Finding the best control input for a VR device is the most basic—but far from the only—challenge facing developers who want to tap into the technology. Unless VR runs at specific refresh rates, or frames per second, it seems to make some users motion sick. It can be difficult for humans to perceive the difference between the virtual reality being projected in front of their eyes, and the actual reality in which they’re having the VR experience.

Then there are challenges with delivering VR as an affordable option. Never mind the probable cost of a virtual reality rig itself, the hardware users may require to take fullest advantage of VR could be very expensive. Highest quality, fluid graphics on a PC aren’t cheap. The optimal setup for a PC running Oculus might give pause to even the most dedicated PC gamer, if all those expensive upgrades are really necessary only to run VR tech.

Even if VR developers figure out how to surmount the barriers thrown up by human beings’ senses, and can deliver affordable VR headsets that don’t require pricey hardware to run on, none of that will matter if playing games in VR is more trouble than it’s worth. And that’s often the case when it comes to VR gaming, owing to bad control schemes.

The consensus is that only games designed specifically with VR in mind are any good on a VR setup. First-person shooters, for example, don’t work very well with Oculus-type hardware. In the default control scheme for first-person shooter games on consoles, the left thumbstick controls forward, backward, and side-to-side movement. The right thumbstick is used to look in different directions and to aim weapons.

I’ve tried FPS games with an Oculus rig, and trying to marry the traditional control scheme to the VR headset felt terrible. If moving my head changes where I’m looking, what is my right thumb supposed to be doing? In the real world, I wouldn’t aim a gun by moving my head. I’d use my hands to hold the weapon in position and look down the sights, or to point the weapon in the direction in which I wanted to shoot. Thumb sticks are appropriate analogues for my hands. The VR rig just gets in the way.

When I’ve tried VR games in which I’m driving a vehicle, however, the rig works great. Imagine you’re playing a car racing game. Your hands are on the wheel, and your feet are on the gas and brake pedals. Where your head is positioned at any given moment is entirely independent of what your hands and feet are doing. Looking over your shoulder while wearing a VR rig in a racing game feels precisely right. You look over your shoulder all the time when you make a lane change on the highway.

VR games in which I’m piloting a spacecraft also excel, again because of the inherent divorce between the positioning of my head and what my hands are doing on the flight stick and/or throttle. It’s not for nothing that one of the most impressive demonstrations of VR gaming right now is the starfighter combat game EVE: Valkyrie. Moving your head around to look out the cockpit at the starfighters and capital ships around you, while piloting your own ship, makes sense and feels natural.

First-person perspective, vehicle-based games only make up a small portion of the video game industry’s total output, of course, and this leads to the question of what the best control scheme for an Oculus Rift-type VR rig ought to be. It’s also telling that one of the most impressive demonstrations of VR gaming to come out of E3 this year doesn’t sound like it gives very much control to the player at all.

It’s entirely possible that even the best controller in the world, designed specifically for a VR headset, won’t be able to sufficiently address these questions. That challenge ultimately rests in the hands of the software developers designing games for virtual reality. Having the right controller hardware could certainly help, however, and if there’s a design team that might have the talent to answer that question, it’s Carbon.

The current virtual reality craze feels an awful lot like the motion-control craze that followed the success of the Nintendo Wii. Neither Microsoft’s Kinect camera nor Sony’s Playstation Move system, both of which attempted to capitalize on that craze, ever amounted to much as far as gaming went. The VR craze also feels similar to the wave of hype surrounding 3D gaming in the recent past, which inspired Sony to release a 3D-gaming monitor peripheral. 3D gaming never took off.

Getting the right control scheme, which Carbon ought to be able to assist with, is one of several lynchpins in making sure virtual reality becomes more than just another hardware craze.