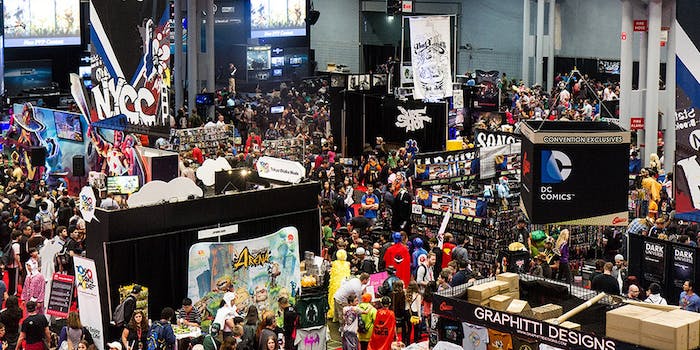 The Empire State's marquee geek event is on the rise. Look out, San Diego.

San Diego Comic-Con (SDCC) is generally known for being the largest pop culture convention in North America, with thousands of attendees filling its halls and the biggest names speaking on its panels. Unfortunately for SDCC, attendance numbers for New York Comic Con (NYCC) were revealed this week, and it looks like there’s a new king of cons in town.

According to The Mary Sue, senior vice president of ReedPOP Lance Fensterman announced that the New York City-based convention had 151,000 unique attendees this year. This means 21,000 more people attended the con at the Javits Center than attended San Diego’s convention, which caps its attendance at 130,000. Fensterman believes the increase may be due to the fact that they opened up Thursday to all attendees, building a full day of programming instead of reserving the day only for press, VIP, and four-day badge holders, as is typically the case.

SDCC tends to draw bigger names due to its close proximity to Los Angeles, and will most likely continue to do so even with this attendance news, but rumor has it that the convention is considering leaving the city due to factors limiting its growth. News this year that a planned expansion to the San Diego Convention Center will most likely not happen means that the 130,000-person cap for SDCC won’t change anytime soon.

Attendance isn’t the only way NYCC can be said to have surpassed SDCC this year. In a progressive move for a convention, NYCC updated its harassment policy with a little help and even included well-received signs around the convention center declaring that “cosplay is not consent.” This is a big difference from the controversy that surrounded SDCC’s policy this year.

So many signs and notices about Cosplay Is Not Consent and reporting harassment, from panel screens to signage. Good job, #NYCC.

Between the news of NYCC’s higher attendance and the other ways the east coast convention is evolving, it looks like SDCC has some catching up to do and some changes to consider making. Otherwise, it just might get left behind!