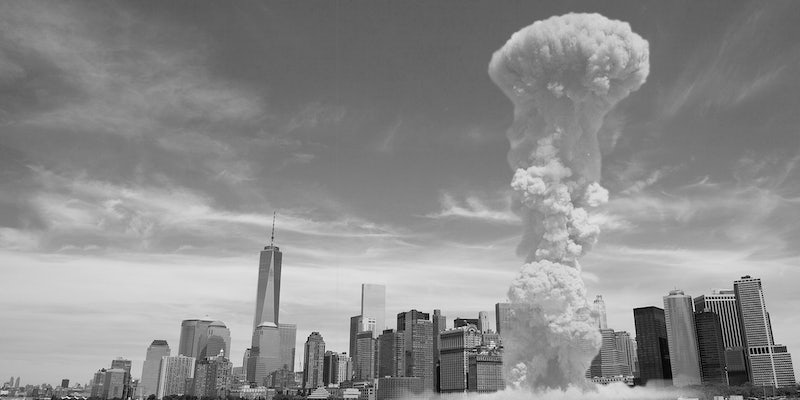 Nukemap uses blast radiuses to send us a wakeup call

An interactive map of what it would look like to get nuked.

What if North Korea managed to develop long-range missiles that could target the United States? What would it look like if Los Angeles were nuked?

Nukemap, developed by Alex Wellerstein, a historian of science at the Stevens Institute of Technology in Hoboken, N.J., allows us to make the threat of nuclear attack personal. It is easy to ignore the nuclear threat if it’s just a vague notion. It is another thing to see how much of your closest city and the surrounding areas would be devastated by a nuclear weapon.

Wellerstein, who probes into the secrecy behind America’s nuclear programs on his blog, created Nukemap to help people understand the reality of the devastation nuclear weapons would cause, and the long term effects they would leave in the wake of an attack. 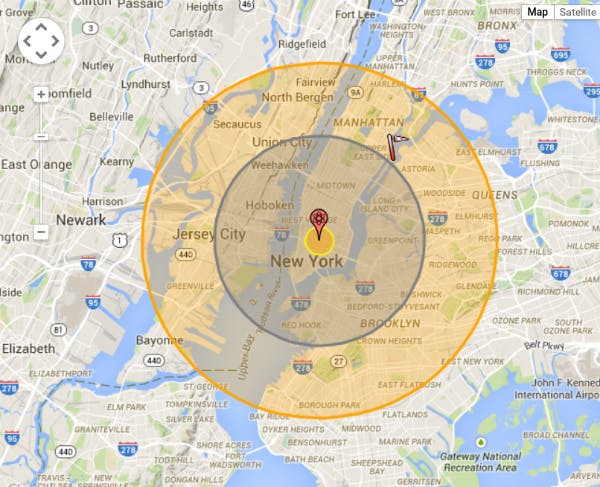 The picture above is what it would look like if New York was hit with an 800 kiloton Topol nuclear weapon, which is currently part of the Russian arsenal. The small, yellow circle represents the fireball generated by the detonation. The blue-grey circle is the airburst radius that would flatten most buildings. The orange circle is the thermal radiation radius that would cause third-degree burns.

Nukemap allows the user to select a target, and to either pick a warhead yield manually or choose from a list of historical nukes or weapons that are currently in nations’ nuclear arsenals. The user can choose to see the immediate effects of one weapon or a multi-warhead device like a MIRV (multiple independently targetable reentry vehicle) on a target city.

Nukemap users can also choose a wind direction and track the area that would be covered by nuclear fallout. The results of specific effects users choose to view are projected onto a Google map of the area, with the option to switch to a satellite view.

The questions raised by Nukemap are macabre, but since the end of the Cold War you rarely hear Americans taking seriously about the threat of nuclear attack. The idea of North Korea threatening the United States with its nuclear arsenal isn’t high on our list of fears, because the North Koreans currently lack a missile with the range to reach us.

Iran’s nuclear program has yet to produce a viable weapon, as far as we know. And the idea of a dirty bomb being detonated by terrorists in an American city is a long shot most of us don’t to worry about regularly.

“Being told that a certain nuclear weapon emits 500 rem of radiation over a given radius of meters means little to the average person,” Wellerstein said in a post on the Stevens Institute of Technology website. “But when you pair that with an illustration of the distance over a city they know well, along with a qualitative description of the effects of 500 rem, suddenly the ultimate meaning of this becomes clear to anyone, technical or not.” 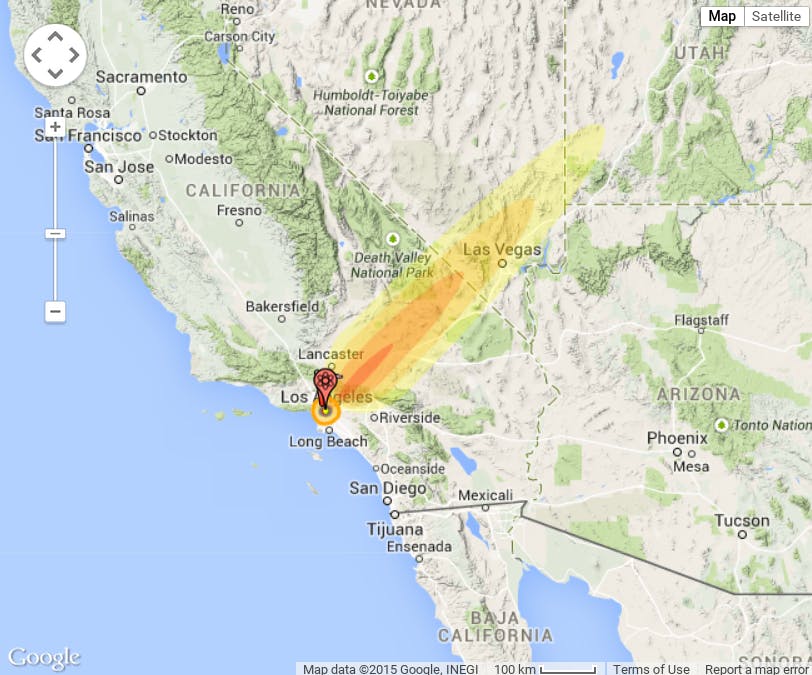 The picture above shows how much of Los Angeles would be destroyed and irradiated if the city were hit with a single Dong Feng-5 ICBM, a 5 megaton yield nuclear weapon that is part of China’s arsenal, as well as the range of the nuclear fallout if winds came in from the southwest. Note that the fallout would spread as far as Las Vegas.

Wellerstein wants to fight the way education on nuclear weapons and their effects has decreased since the end of the Cold War. Nukemap is designed to speak to the general public, journalists, and students, to remind them that nuclear weapons are still very real, and no less dangerous than they ever were.

He also wants people to understand the dangers involved in discarding weapons-grade plutonium, and the declassified history of how the United States prepared the only two nuclear weapons in history to ever be deployed, the bombs dropped on Hiroshima and Nagasaki that ended World War II. 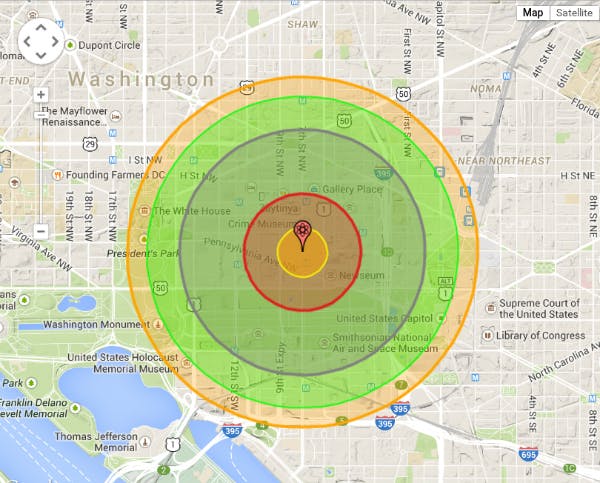 The picture above shows what the detonation of a 10 kiloton surface burst nuke, the type of nuke a terrorist organization might be able to deploy, would do to Washington, D.C. The White House, the Capitol, and the entire National Mall would be gone.

Nukemap is meant to educate, not terrify. It is concerned with the possibility of nuclear attack, not the probability of such an attack ever taking place. If Nukemap does terrify you, however that’s a good sign you are taking seriously the very real threat that is still posed by nuclear weapons.

May we never have find out whether Wellerstein’s simulations are accurate.