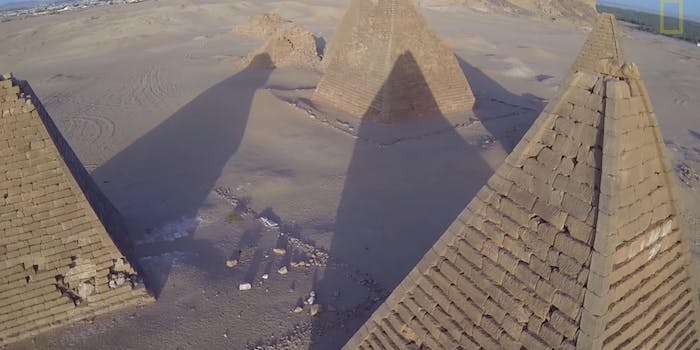 Drone cameras are now so commonplace that we often see them used in extreme sports videos and YouTube pranks, but they have many scientific uses as well.

National Geographic engineer Alan Turchik flew a quadcopter drone over Sudan to get a bird’s-eye view of the famous Nubian pyramids, a series of structures built during the 2,000-year reign of the Kushite civilization.

In addition to using drones to get a more accurate perspective of the site’s layout, archaeologists are using a remote-controlled robot to reach previously inaccessible caves nearby.

The ruins shown in this video are part of the tomb of a Nubian king who conquered Egypt in 715 B.C., making them almost 2000 years younger than the Great Pyramid at Giza, which was built around 2560 B.C. So while the Kushite pyramids were influenced by the ancient Egyptians, they were—historically speaking—about as far removed from Giza-era pyramids as we are from these Nubian pyramids today.