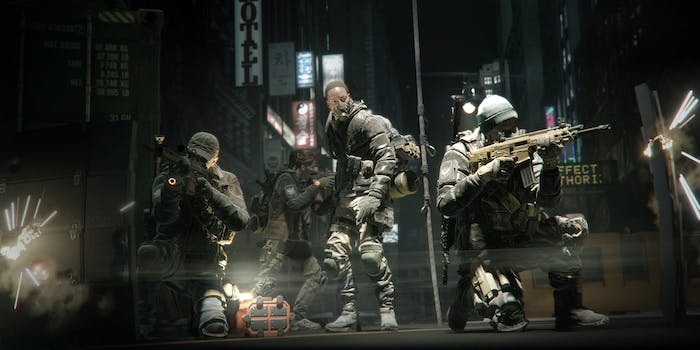 There will be no early reviews for The Division

You'll have to wait until the game is out to see if it's worth your $60.

You will be heading into The Division next Tuesday at the same time as game critics.

Ubisoft announced today on its Ubiblog that reviewers will not be given early access to The Division, citing the challenges of providing proper review conditions for an online game.

“Since it’s impossible for us to populate the servers in a way that would adequately replicate playing The Division on launch day, reviewers will start playing the game along with everyone else when it’s released on March 8 – after the servers go live officially at 00:01AM Australian Eastern Daylight Time (AEDT). “

Many review outlets, including the Daily Dot, choose not to publish reviews with significant online multiplayer components until after a public launch anyway for this exact reason. It’s risky to recommend a game before making sure public servers aren’t going to give players a terrible experience. On other side of the coin, players won’t be able to research review scores before deciding whether to drop $60 on the game on launch day.

In the case of The Division, a pair of pre-launch betas gave us a peek at what’s coming, and the new story trailer revealed Tuesday by Ubisoft paints a picture of an exciting multiplayer shooter. But whether or not the game lives up to the hype is something no one can answer definitively until after March 8.

There’s plenty of material to read about the recent closed and open beta tests for The Division, but both betas were extremely limited in terms of content. They introduced basic game concepts and not much else.

How long it will take for players to get through everything The Division has to offer is a looming concern for people who bought Destiny, another massively multiplayer online shooter game in September 2014 and discovered it was frustratingly short on substantive content.

Players also know nothing about The Division’s end game. Ubisoft has not been forthcoming in telling consumers whether or not the game will feature anything like raids—the extremely difficult end-game challenges that most MMOs offer to powerful end-game players.

Yet Ubisoft choosing to eschew early access for reviewers in favor of putting everyone on the same playing field may actually be the best choice for everyone’s sake. The practice of reviewing online games in controlled, artificial conditions has rightfully come under fire in recent years—and it’s why many outlets have changed their practices.

Games like Destiny and The Division that offer no components designed for lone players leave reviewers at the mercy of whether they can find colleagues to play the game with prior to release, and even then the servers are not being taxed the way they’ll experience on release day.

Making everyone wait to play The Division until March 8 eliminates the question of whether reviews are accurate or whether they reflect artificial conditions. It’s a form of consumer protection if players can exercise the patience to wait for reviews to be published before deciding whether or not to make the purchase.

The Division will be released for PC, PlayStation 4, and Xbox One.