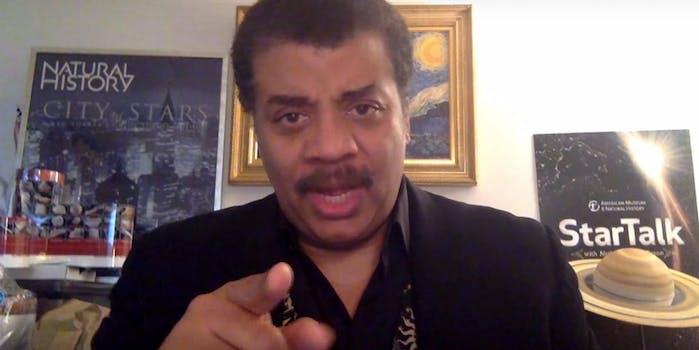 No, a helicopter with a failing engine lands much more gracefully than Tyson may believe.

Sandlin took Tyson to task in the latest installment of his series SmarterEveryDay, a science-based exploration vlog. In the episode, Sandlin proved that a helicopter with a failing engine lands much more gracefully than we think.

Teaming up with helicopter pilots Bradley Friesen and Gerry Friesen (unrelated, Sandlin notes), Sandlin explained that if a helicopter’s propellers are still in motion, a pilot can manually feather the blades in the event of an engine failure and safely land the aircraft.

Before going into free fall and demonstrating the concept on camera, Gerry even speculated that landing a helicopter with a busted engine was safer than landing an airplane in the same state.

Thank goodness Tyson didn’t take the challenge to heart. Proving that he’s a good sport about the whole kerfuffle, the scientist made a cameo appearance in the episode.

Watch the video down below.

Perhaps B.o.B. can take a page out of Sandlin’s book and vet his next fire diss track with, well, science.