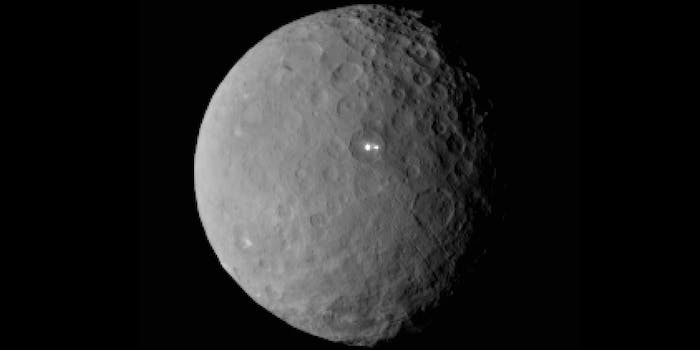 What are those mysterious patches of light?

Dawn, which left Earth in 2007 to study dwarf planets in the asteroid belt between Mars and Jupiter, is due to enter Ceres’ orbit next month. Earlier images of the planet showed only one bright spot, but as Dawn draws closer, NASA has been able to take more detailed photos. Here’s what our view of Ceres looked like at the beginning of the month.

The latest images show the original bright spot located inside a basin or crater, with a smaller bright spot beside it.

“This [basin] may be pointing to a volcano-like origin of the spots,” theorized Chris Russell, principal investigator for the Dawn mission, “but we will have to wait for better resolution before we can make such geologic interpretations.”

NASA’s Dawn mission blog describes these bright spots as a “mystery,” although the spacecraft’s approach to the dwarf planet means that mystery may soon be solved. Dawn is scheduled to enter Ceres’ orbit on March 6, spiraling closer to the planet over the course of the next few months.