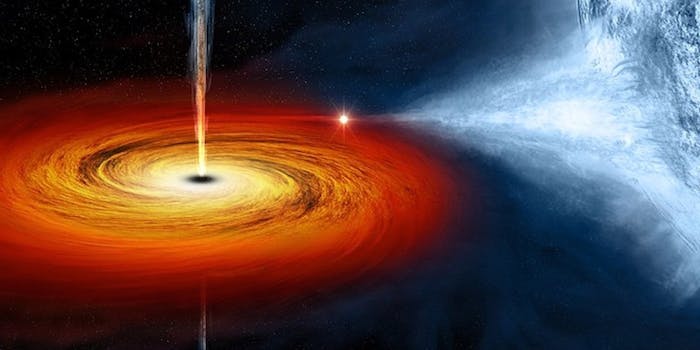 NASA is encouraging people to learn about black holes instead of worrying about Black Friday.

It may be Black Friday but instead of going crazy fighting shopping crowds and searching for deals, why not spend the day learning about black holes courtesy of NASA? For the second year in a row, NASA has decided to celebrate what they’re calling Black Hole Friday.

All day on social media NASA will be sharing information and photos of black holes. They kicked off the day with an explanation of what exactly a black hole is and since then have been continuing to share interesting facts and even a free black hole game.

A black hole's pull of gravity is so strong, no light escapes: https://t.co/j7YejD8yaK #BlackHoleFriday #BlackFriday pic.twitter.com/0HHvCovGZ2

Looking for a board game this #BlackFriday? Here's a free black hole game: https://t.co/UNeAAeztws #BlackHoleFriday pic.twitter.com/5RcGp9GYBG

Using the hashtag #BlackHoleFriday, you can follow along with others celebrating science over shopping. Many people were thankful to have a different option for today amid the Black Friday frenzy.

The only #BlackFriday I care about today is the amazingness of @NASA's #BlackHoleFriday.
Seriously, check it out!

Is it wrong to be more excited about #BlackHoleFriday than #BlackFriday?

For an antidote to the #blackfriday madness try #BlackHoleFriday from @NASA instead.Much more interesting and fun! https://t.co/MofZXC5j8L