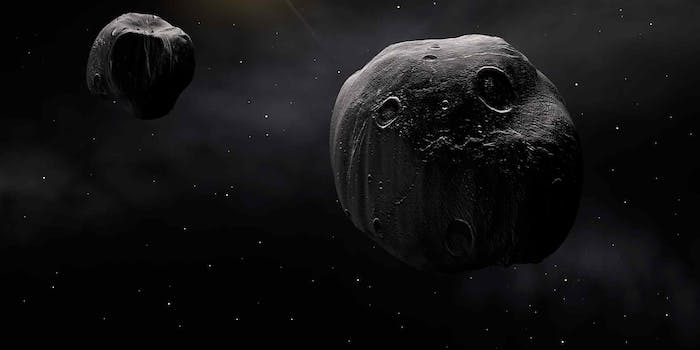 An internal watchdog publishing a damning report about the agency's shortcomings to date.

NASA’s search for potentially Earth-threatening cosmic debris is not going well, according to a new report from the agency’s internal watchdog, and that ought to worry everyone who cares about not being vaporized by a meteor.

Even though its budget for tracking Near-Earth Objects (NEOs) has increased 10-fold since 2009, NASA recently said that it will not meet a congressionally-mandated goal of finding 90 percent of NEOs longer than 140 meters by 2020. NASA Inspector-General Paul Martin’s Sept. 15 report analyzed the reasons behind this projected failure.

In short, the report claims the program has too little funding and too few resources. Oversight of its grant approval process is deemed “inadequate,” and NASA has not developed sufficient partnerships with the U.S. government and international allies.

NASA established the Near-Earth Object Observations Program, based out of the Jet Propulsion Laboratory in Pasadena, Calif., in 1998, after Congress directed the agency to search for and catalog all “potentially threatening comets and asteroids larger than 1 kilometer in diameter.” At press time, according to a NASA FAQ, the office had identified 11,455 NEOs in total, with just under 900 of them measuring more than a kilometer in diameter.

“In addition to limited personnel,” the report said, “the NEO Program lacks a plan with integrated milestones, defined objectives, and cost and schedule estimates to assist in tracking and attaining Program goals.”

The 11,455 NEOs that NASA has cataloged are believed to represent only 10 percent of the near-Earth asteroids over 140 meters long, Martin’s report warned. According to Reuters, NASA has located almost all (95 percent) of the one-kilometer-or-larger NEOs, which are the most hazardous.

The dangers of a direct impact from a meteor rose to prominence in February 2013, when an 18-meter-long asteroid fragment streaked across the sky over Chelyabinsk, Russia, and exploded in the atmosphere. The explosion carried the energy equivalent of 30 nuclear bombs, and the resulting debris showers injured hundreds of people.

“Recent research suggests that Chelyabinsk-type events occur every 30 to 40 years, with a greater likelihood of impact in the ocean than over populated areas,” the Inspector-General’s report said.

Martin recommended that NASA “develop a formal NEO Program with a strategic plan, integrated master schedule, and cost estimates.” He also wrote that “the Program would be more efficient, effective, and transparent were it organized and managed in accordance with standard NASA research program requirements.”

John M. Grunsfeld, a former astronaut and the current associate administrator for the Science Mission Directorate, agreed with the report’s recommendation. “NASA places a high priority on finding and characterising hazardous asteroids to protect our home planet from them,” he said.