This thrilling teaser for ‘Mobile Suit Gundam Thunderbolt’ is perfect

The franchise is back and better-looking than ever.

As any Gundam fan can tell you, the new anime adaptation of Mobile Suit Gundam Thunderbolt has a lot to live up to—like, oh, nearly four decades of the Gundam franchise and its basically perpetual run of series and adaptations. Alongside Neon Genesis Evangelion, Gundam stands as Japan’s best and most beloved example of the cultural obsession with mecha, or giant robots.

If the new 15-second teaser from Bandai for Mobile Suit Gundam Thunderbolt is any indication, the new series will deliver plenty of what fans love. Sure, we don’t really get to see much beyond a dazzling sweep of what looks like post-apocalyptic space debris—which the translated teaser dubs “the worst battlefield in the One Year War”—but there’s action, there’s a Cowboy Bebop-like jazz motif, and there’s a gundam pilot. Sign us up.

The jazz theme in the teaser is significant—it’s how you know the lead character, Ensign Io Fleming, is coming for you.

In the few weeks since the anime was announced, the show’s website has released a smattering of details about the anime, including this poster of our two primary combatants: Fleming, shown with his mobile suit, the Full Armor Gundam; and Sergeant Daryl Lorentz of the Principality of Zeon, shown with the red Psyco Zaku. The tagline on the website tells us they’re destined to kill one another. Yikes. 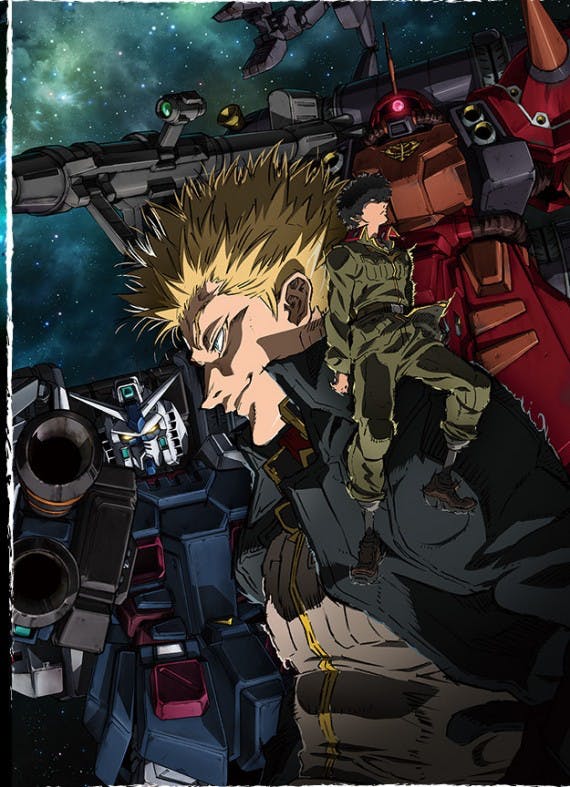 Fans familiar with the original 1979 Mobile Suit Gundam series will recognize the setting of the One Year War. Thunderbolt will follow the rivalry between Fleming and Lorentz as they face off in a battleship wreckage zone called the “Thunderbolt Sector.” Fleming and Lorentz are rivals—Fleming flies for the Earth Federation, while Lorentz is a legendary sniper for Zeon.

OK, so it’s not much to go on. But this will tide us over until the anime debuts. Though there’s no release date yet, fans in Tokyo will get a preview of the first episode later this month as part of Bandai’s 35th anniversary Gundam EXPO World Tour.