"Family friendly" could be a roadblock to a satisfying tale.

The most interesting thing about Minecraft: Story Mode thus far is trying to figure out how Telltale Games is going to weave a satisfying story while slapped into family friendly handcuffs.

While most of the licensed franchises Telltale has handled—Back to the Future, Jurassic Park, The Walking Dead, Fable, and Game of Thrones—span multiple forms of media, they are still narrative experiences. Adventure games are first and foremost about storytelling, so naturally all of these licenses made perfect sense for Telltale.

They also had clearly defined parameters. Telltale had a starting point to determine how the plot and characters would present opportunities for the player to negotiate events and challenges.

With Minecraft: Story Mode, however, Telltale is working from whole cloth. Minecraft is defined by and ultimately depends on formlessness. The game gives you raw materials, tools, and adversaries and challenges players to go make their own story. Minecraft’s structure is only confined by the properties of materials, and recipes, and mob behavior.

When Telltale attempts to place a structure beyond that on Minecraft in order to provide the scaffolding for Episode 1: The Order of the Stone, it feels incongruous in a way that no previous Telltale game has. 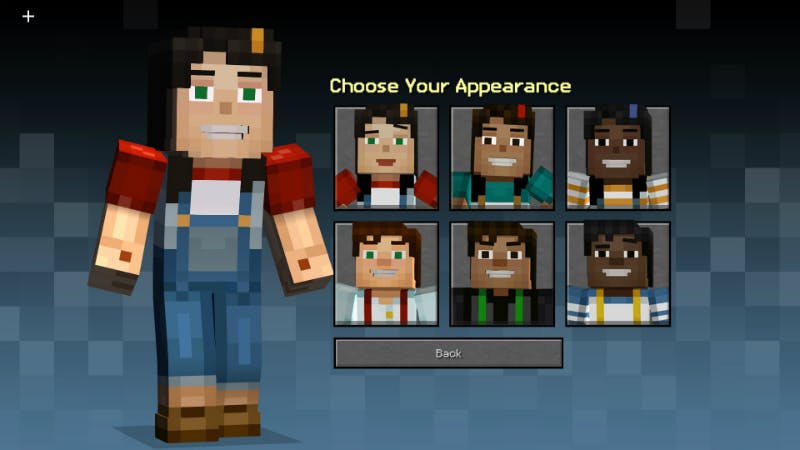 Minecraft: Story Mode is about the Order of the Stone, four heroes who slayed the Ender Dragon and then chronicled their story for the world to hear. At the annual Ender Con competition teams are putting their building skills to the test, in order to win an audience with Gabriel the Warrior, a member of the Order.

A terrible mishap at Gabriel’s appearance unleashes a creature with the potential to destroy the world, and so you—Jesse, who can be depicted in up to nine different varieties of gender and skin color—and your friends embark on an adventure to locate and bring back the remaining members of the Order to help save everyone.

Usually Telltale games offer some sort of introduction to the world the player is about to step into, unless the premise is simple enough that an intro may not be necessary. The Walking Dead is about zombies—show some zombies in the opening moments and you’re good to go. Fable needed more grounding for the player. Simple introductory text and character-based exposition provided it.

Minecraft: Story Mode offers no such introduction, which felt like a problematic omission. The webseries Seedlings, also set in the world of Minecraft, has only a cursory introduction but takes place in an instantly-familiar Minecraft village a novice players might be able to build, and smaller versions of which spawn naturally in the game.

Seedlings feels like it takes place in the same Minecraft you could play, yourself. Minecraft: Story Mode, does not. So, where is this place? We have no idea. 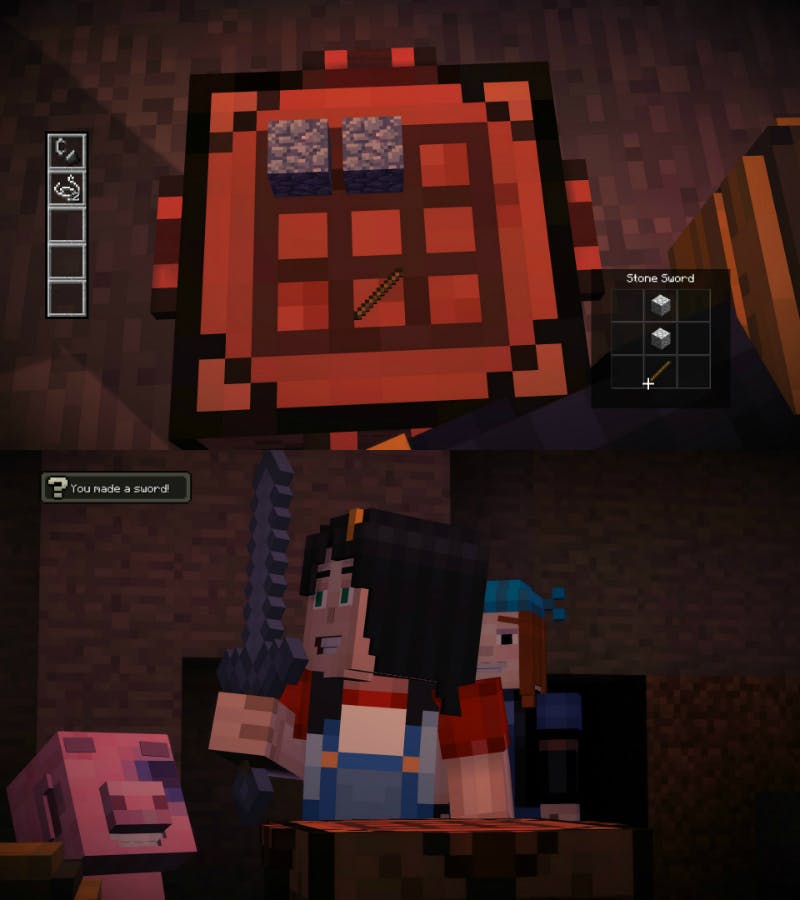 This dissonance between what Minecraft actually is and the concept presented by Telltale might be more recognizable to veterans of Minecraft than to casual observers. But that raises yet another question: Who Minecraft: Story Mode designed for?

It doesn’t seem built for Minecraft fans who love the game because they get to build things and be creative. Minecraft: Story Mode waves a hand at the fact that you’re supposed to make stuff in Minecraft, with sequences that allow the player to place raw materials in the correct slots on top of a crafting block to make simple tools like swords, a bow, and an arrow, which the characters then use in the story.

Other sequences where your character gathers raw materials or builds things with those materials are governed by tapping the Q button (on the PC version of the game). Reducing the most essential aspect of Minecraft to a quick-time event just feels wrong. 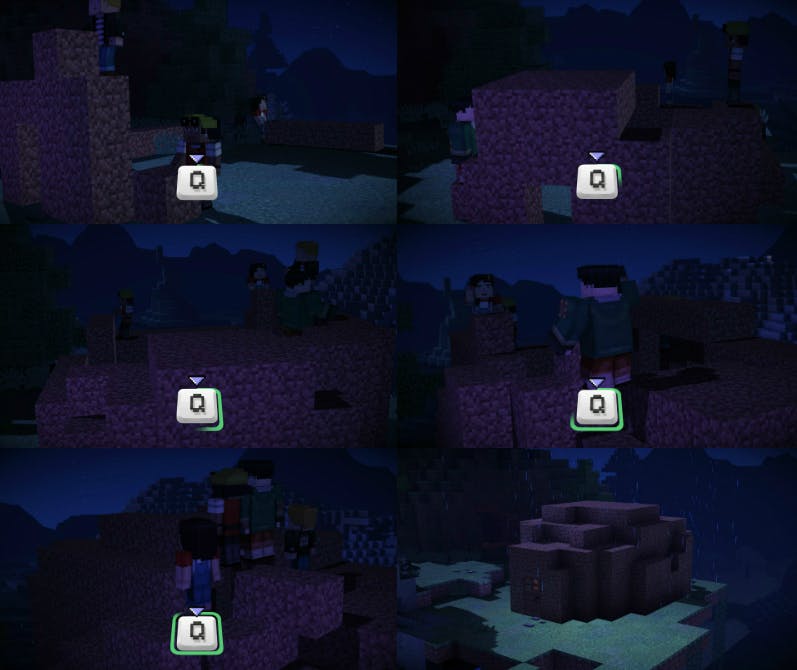 The illusion of being in Minecraft was utterly broken at precisely the moments that Minecraft: Story Mode most wanted me to feel like I was in Minecraft. I found myself wondering during all of these build sequences why, if I wanted to play a Minecraft game, I shouldn’t just go play Minecraft instead of continuing to play Story Mode. 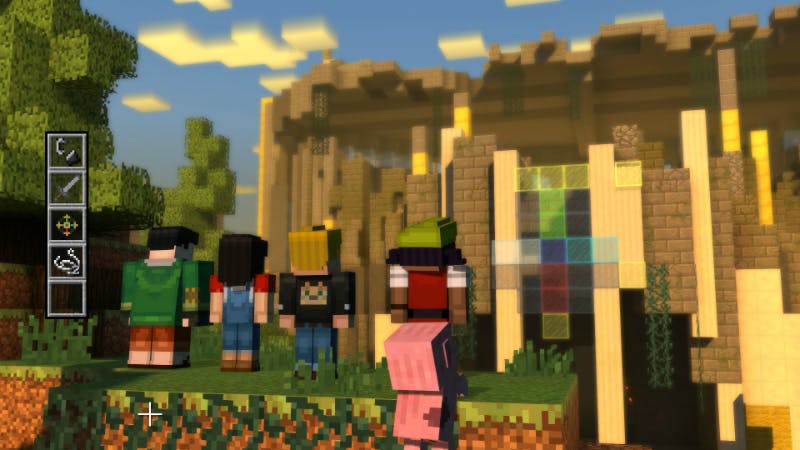 Minecraft is renowned for its educational uses in primary and secondary schools. Lego has a growing line of Minecraft-themed sets intended for children. And part of the wonder of Minecraft is that while it’s accessible to children, it does not feel juvenile. YouTube stars like CaptainSparklez show off the amazing depth and complexity that modders have added to Minecraft. Multiplayer Minecraft servers become virtual worlds.

Minecraft: Story Mode is rated E for Everyone, so it’s not pretending to be anything other than family friendly. That doesn’t mean it also has to be juvenile, which is how Episode 1 – The Order of the Stone felt. The dialogue and the plot felt very safe.

This could largely be attributed to the fact that Telltale has some heavy games in its portfolio—games about post-apocalyptic zombie carnage, ultra-violent fantasy worlds filled with megalomaniacs, and a murder mystery where the Big Bad Wolf is always ready to rip throats out, should he lose control. Minecraft is inherently tame by comparison.

Maybe Story Mode is a matter of Telltale having its creative hands tied by the age group of the audience the game is going for. In the process, Story Mode feels like an advertisement for Minecraft, and we can’t lay that solely on the fact that Minecraft: Story Mode is a licensed game.

In Minecraft: Story Mode – Episode 1 the source material feels like it has more pull on the game than influence from the writers at Telltale. 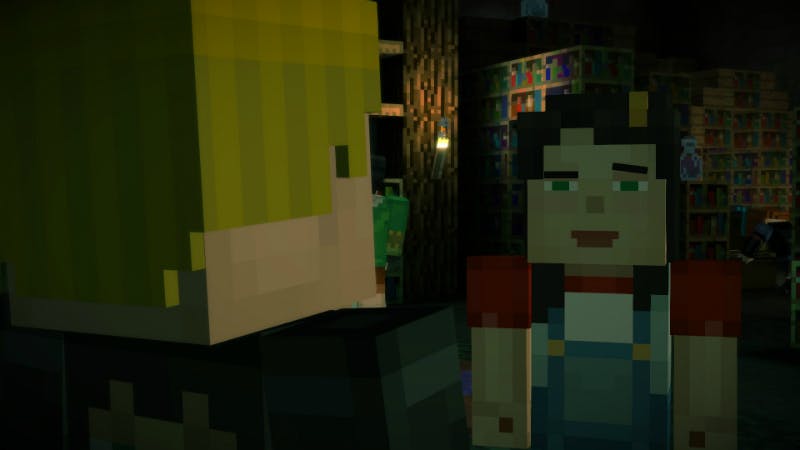 If I come back to the game, it’ll be to find out how Telltale is going to handle what feels like a quintessential conflict between the types of stories the studio is known for crafting and the limitations that feel imposed upon it by this family friendly depiction of Minecraft.

There is the potential for a more developed and sophisticated narrative within Episode 1- The Order of the Stone. No one should write off Minecraft: Story Mode off based on a slow start.