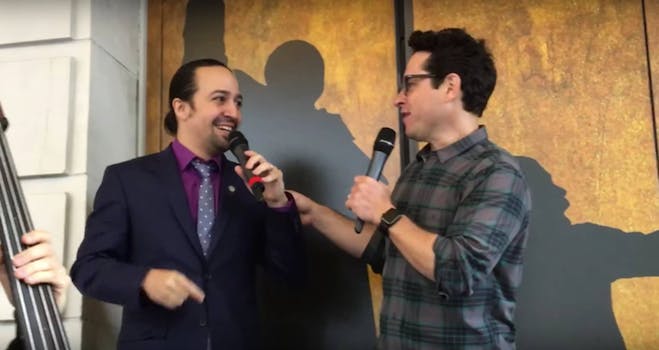 It's a 'Star Wars' version of a Shaggy song.

Sometimes the Force brings the right people together at the perfect time, and there’s no better indication of that than of the masterminds behind two of the past year’s biggest hits coming together on May the Fourth.

Lin-Manuel Miranda and J.J. Abrams have worked together before: While promoting Star Wars: The Force Awakens last December, Abrams revealed that he and Miranda wrote new cantina music for the movie, a collaboration that came together after Abrams saw Hamilton and Miranda offered his services. It was a real treat for the audience, especially the intersection of Star Wars and Hamilton fans.

Outside of the Richard Rodgers Theatre in Manhattan, Miranda and Abrams came together to perform “Jabba Flow,” which is a song entirely in Huttese, for Wednesday’s #Ham4Ham. The song, taken from a Huttese glossary they found online, essentially translates to, “No lover, lover, it wasn’t me.”

“It’s literally a Shaggy intergalactic remix,” Miranda exclaimed to the crowd. And yes, Abrams sang too.

After the performance, Miranda revealed that “Jabba Flow” was finally available for fans to purchase on iTunes. (The cantina song was missing from the Force Awakens soundtrack.)

The scoop of today's #Ham4ham show: you can get our Star Wars tune today! Thanks JJ! #MayTheFourthBeWithYou pic.twitter.com/U0T5wdJs3N

We know what we’ll be playing on repeat for the rest of the day.