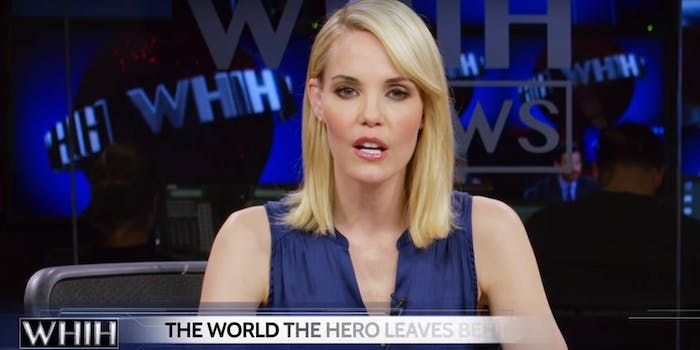 Marvel‘s fake TV news channel is back, and just in time for Captain America: Civil War.

WHIH is hosted by Christine Everhart (Leslie Bibb), a journalist who first appeared in Iron Man in 2008. The viral news channel popped up on YouTube to promote Ant-Man last year, and now Christine Everhart has returned to provide some background world-building for Civil War.

Joined by a co-host played by former Daily Show correspondent Al Madrigal, Everhart discusses whether superheroes have a negative impact on public safety. Should people with superpowers be free to act independently as superheroes, or should they submit to government oversight?

Everhart refers to this segment as the start of an ongoing report, so fans should check back during the days leading up to Civil War‘s release. It looks like WHIH is going to go back through the biggest MCU showdowns of the past few years—Sokovia, New York, and Washington D.C.—and discuss whether superheroes like the Avengers put civilian lives in danger.