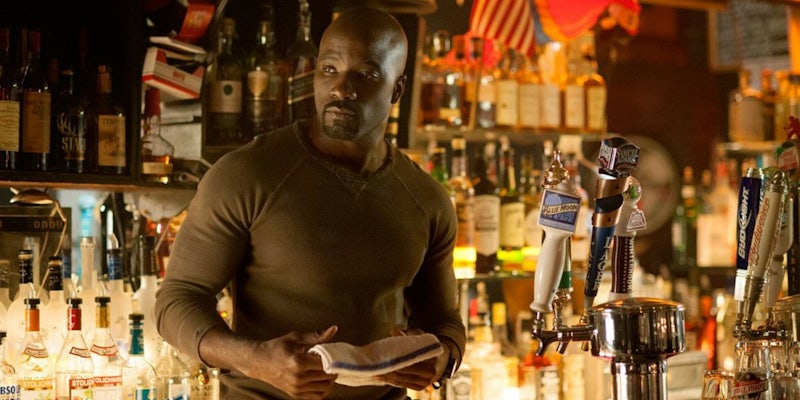 We'll first see Cage in 'Jessica Jones', but he has a big arc ahead of him.

New York Comic Con‘s Jessica Jones screening let the cat out of the bag regarding Luke Cage‘s role in the show. Yes, he’s there from episode one, and yes, he and Jessica Jones have a relationship that fans of the Alias comic will find very familiar.

Luke Cage, sometimes known as Power Man, will be getting his own Netflix series following his recurring role in Jessica Jones. But the cross-pollination between Marvel‘s mini-franchise of Netflix series has fans wondering how the Jones and Cage shows will fit together.

In an interview with Comicbook.com, Mike Colter, who plays Cage, explained how the continuity between shows will work.

“Luke Cage will take place a few months after Jessica Jones,” he said. “So in real time, if you watch Jessica Jones, you’ll find [at the end] Luke Cage uptown in Harlem, working, trying to make ends meet. Luke Cage really hasn’t figured out what he’s doing. He’s tending bar, he’s bouncing around. And for good reason, he’s a fugitive, he has some skeletons in his closet.”

The second season of Daredevil is likely to air before we see more of Luke Cage, whose show only began filming last month. In the meantime, Colter has already hinted at how Cage will be introduced.

In addition to a Harlem setting—uptown from Daredevil’s Hell’s Kitchen territory—Cage will be more low-key than Jessica Jones or Matt Murdock. “He’s trying to basically stay off the radar,” Colter said.

It sounds like Cage’s character arc will be about learning to embrace his superpowers. With great power comes great responsibility, and all that.